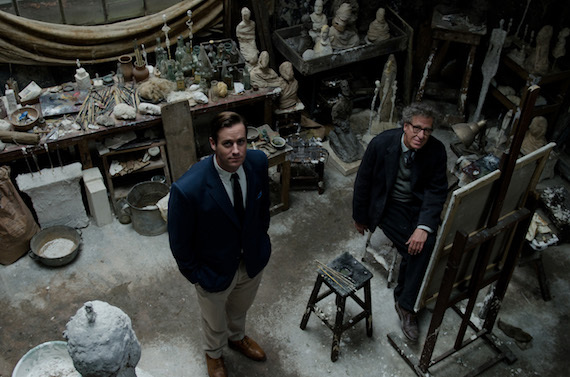 It is obvious that we live during times where escapist entertainment is welcomed. The various award statuettes a certain modern musical has been collecting, one after the other lately are proof of that.

But are we simply running away from daily life by walking into a darkened movie theater to watch a film, or are we actively searching for something, a new way to look at the life we have, which may make it more bearable, through art? It's a question I ask myself through my writing, almost every day.

I seem to have found an answer in Stanley Tucci's Final Portrait. OK, even in the figure of Tucci himself, who has long been a dream interview of mine. But at Berlinale, you see, dreams do come true.

Final Portrait is a languid, thoughtful and at times infuriatingly recurrent film about a moment in time in the life of Alberto Giacometti, the sculptor and visual artist born in Switzerland, who lived most of his life in Paris. It describes the sitting sessions -- a promised "one day" which turns inevitably into 18 long sessions -- between American writer James Lord and Giacometti, while the artist paints the writer's portrait. Through these sessions we come to know and love, laugh and live through, and hate and understand both Giacometti, deeply, and Lord.

As the daughter of two artists, Final Portrait helped to explain so much about my upbringing and also my life, my need for perfection -- which I demand strangely of myself and not others so much -- and my parents' damaged existences. And about this incredibly bipolar relationship artists, writers, filmmakers even have with life, success coming at the price of constant self-doubt.

Final Portrait brings together an ensemble cast of wonderful actors, helmed by the charismatic figure of Geoffrey Rush as Giacometti, and flanked by one of the most exciting young talents of today, Armie Hammer as Lord. But there are also gems such as Tony Shalhoub playing Giacometti's brother Diego and Sylvie Testud, unrecognizable at first sporting brown hair, as Giacometti's wife Annette, their presence creating a familiar feeling and the correct environment to make the audience buy the story and the surroundings wholeheartedly.

Sitting down with Stanley Tucci naturally turned into a highlight of my festival experience but I have to say his beautifully shot and sublimely acted film keeps finding new nooks and crannies inside my thoughts and now, even a permanent place in my heart. 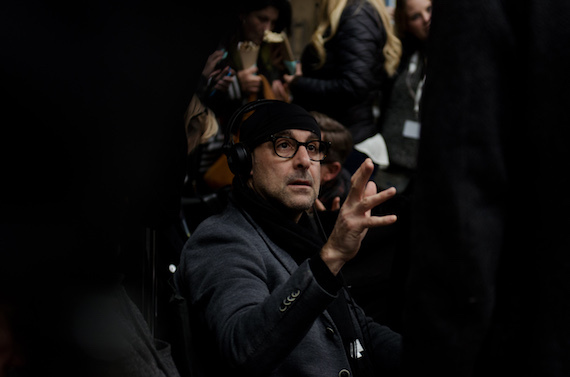 Have you ever sat for an artist?

Stanley Tucci: I have. I did. My dad was a painter, an artist.

And did you suffer as much as Armie Hammer's James Lord does in the film?

Tucci: No, not quite like that! Giacometti made everybody suffer.

There is a wonderful quote by Tony Shalhoub in the press notes about the "haunting sense of self-doubt" that all artists possess. Is that what drew you to this project?

Tucci: There is no question about self doubt -- and Tony and I know it very well, we talk about it all the time -- you are always doubting yourself. You're always going "is that right?" or "could it be better?" Can I do this? So yeah, it's ever-present and that's why you just have to be as prepared as possible but also have to throw yourself into it if you're doing something too. Having worked with Tony a lot, having directed Tony in films and on stage as well and worked with him as an actor, you sit there and you prepare in advance and then you go in and do it. And then you can sit back and say "yes, it was good," and five minutes later you go, "Oh, maybe it should be this," so it's a constant vicious circle.

Do you think it relates to all art?

Why did you choose this film as your next directorial project?

Tucci: I love art and I fell in love with Giacometti's art a long time ago. I found this book [James Lord's 'A Giacometti Portrait' which the film is based on] a long time ago and carried it around with me -- to me it's the perfect book about the creative process. I always thought, could I make a movie about it, I don't know? And then one day about thirteen years ago I got up the guts to write James Lord a letter and he said no at first. But I eventually got the rights to it and it took me about two years to write it and ten years to get the money to put all the pieces together.

Your casting is sheer genius. Geoffrey Rush as Alberto Giacometti...

Tucci: He's amazing. I know. We got lucky. We attached Geoffrey to it three years ago now, and with Geoffrey attached people became interested. But because it's a rather esoteric film and not your standard fare it was hard to get the money. Luckily I met Gail Egan the producer and she's the one who really made it happen.

With your father as an artist, you must have spent all your life among intellectuals, artists, art historians. What are the advantages and disadvantages of growing up in that environment?

Tucci: I don't know if I spent my life around intellectuals. My father's influence was significant, is significant because I think the connection in some ways is yes art, but it's more about looking. It's about never not looking. When I would walk down the street with my dad, we would go someplace, or even just sitting at the dinner table, he was always pointing out his observations, what he saw, what he thought was beautiful, what he thought was interesting. And whether it was the way the light hit something, the ice was on the branch on a tree, the way the beet juice in the oil on the plate made a beautiful pattern and coloration, that's so much of what he is, and it became who I am. I'm a very visual person and I become more so as I get older. So that was incredibly influential to me.

And then to watch my dad teach, he was an art teacher, to watch him teach was the performance aspect and the looking aspect was that fine art aspect that got me very interested in it. So it's always about looking. In this film Giacometti is looking at the same thing, over and over and over again but he's always seeing something new in it. That's what I find when I draw something, or when I am discovering a character, you're doing the same thing. You are saying the same lines over, but you're finding something new all the time. Up to certain point. So I think that constant exploration and that constant attempt to pierce whatever façade is there to see beyond it and within it and behind it and around it, is the job of the artist. It's also a great a way to live your life.

Are you ever afraid of being dishonest in your work?

Did you feel like a bit of a hostage in having to portray an actual person who has lived?

Tucci: No, if I felt a hostage I wouldn't have done it. I felt like I got to know him as well as someone can know someone without meeting him, through different people who had met him, James Lord in particular but also reading about him. I felt like I knew him. There is invention there without question, but you have to know the person in order to make the invention, so I felt like I knew him as much as I could.

Is there something audiences can learn from Giacometti today?

Tucci: I don't know that it has a relevance to today. The artist process has always been the same. For generations, and it never stops. No matter what year you are in, the artist is always going through the same things. That said, there are some artists who are more political or more socially motivated than Giacometti. He was none of that. He simply wanted to express what he saw in clay or plaster, with paint or pencil and express...

Is there relevance to it today? Only in the sense that he's just showing us who we are. And I guess it's never a bad idea to try and find out who we are.

As an actor, when you're directing are you finally "the boss"? Or do you let your actors take control of their roles?

An actor should come in very prepared to work, have the knowledge of the subject but not only know his character, also know the film as a whole. That's a really important thing for actors to have. I'm not a big believer in "I only know my own role." I think that's nonsense. How could you do a play if that were the case? You couldn't. You have to act with the other person and have an understanding of the arc of the thing. The same holds true with film.

We live in very political times. Is Final Portrait a manifest and a reminder of the other world, one deeper and more universal?

Who is your muse, as a director?

Tucci: For me it's the complexity of relationships and the space in between people that's motivating.