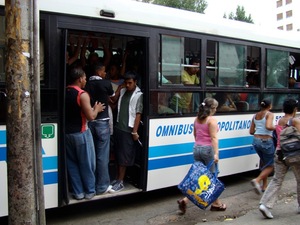 At seven in the morning the bus stop -- after an hour with no buses -- is crowded. A vehicle heading toward Old Havana passes by without stopping, leaving behind a trail of angry shouts and gestures. Some of the shouters decide to make their way on foot, other resign themselves to spending their last ten pesos to take a shared taxi. Many of the frustrated passengers will be late to work again today.

It's not an isolated scene, in every municipality in the capital long lines for public transport are part of the urban landscape, such that people can no longer imagine the city without these mobs around the signs that promise the P1 or the P4, the microbus to the airport, or the route that goes to the Vedado, will stop there.

The difficulties of travel grip the country. Our ancient metropolis is condemned to immobility in a long and narrow country where trains were introduced even earlier than in Spain. The paralysis of movement has a strongly negative effect on the nation, the losses to the productive and economic life of the country are incalculable. The fact that people cannot move freely throughout the island affects professional development, family relationships, and even relationships between couples. 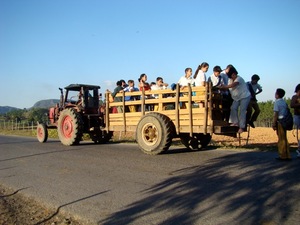 Fifty miles becomes an abyss, difficult to cross, when the only way to get from one side to the other is a means of transport that operates on no fixed timetable and that lacks the state of repair necessary to function reliably. It separates parents and children who live in different provinces, delays workers heading for factories, and keeps offices that serve customers from opening on time because their staff has not arrived. The collapse of transportation marks the daily lives of all of us, imprinting its haphazard, slow, and often exasperating pace on all our activities.

The days when they planned an urban metro system to resolve many of these difficulties are long gone. Its construction was to have been subsidized by the Soviet Union, but became one more chapter of unfulfilled dreams when European socialism collapsed. On a central avenue leading out from the Council of State they started to erect the headquarters of the metropolitan transportation office, but only got as far as the foundation. When the difficult years of the Special Period arrived a fruit and vegetable market was located there. 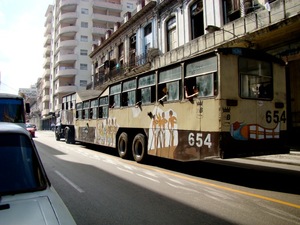 We said goodbye, then, to illusions of modernity, while our streets were taken over by huge trucks that pulled containers for people. With their two humps we baptized them "camels." Instead of moving forward we went backwards to the basics of urban mobility, turning what were essentially semi-trailers into makeshift buses.

So we continued until the country began its shaky recovery from the economic collapse, and a multi-million dollar agreement with China brought hundreds of shiny new buses to the island. The reception was tremendous, with Raul Castro himself dedicating several paragraphs in his speeches to announcing that the old "camels" would no longer circulate in the capitol, as the weight of their enormous bodies had crushed the streets, and their bulk had knocked down balconies and provoked innumerable accidents. 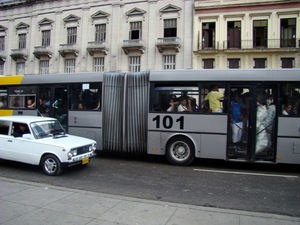 It seemed that Havana would eventually sign up for the twenty-first century. As moving around the city no longer consumed so many of the hours in our days, we could once again visit friends we hadn't seen for years. The initial launch of the new Yutong brand buses set loose a frenzy of movement.

But public transportation couldn't overcome its most important contradiction: not only is it not profitable, but for it to exist at all it must be subsidized by the government. With a symbolic fare of 20 cents in national currency (less than a penny U.S.), passengers don't pay enough even to repair the windshields.

At the same time, in a country where "what belongs to everyone belongs to no one," vandalism and predation began to take their toll, as evidenced by growing deterioration of the buses. In less than two years the gleaming new buses started to show a rip here, a patch there, with fewer vehicles available for service. The stops, once again full of expectant passengers, became scenes of misery for those with no choice but to resort to public transport, waiting for buses that didn't come or passed up the stops, already bursting with passengers. 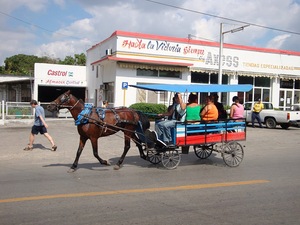 Private taxis began to make a killing carrying the thousands of people desperate to reach their destinations; the old Chevrolets and purring Cadillacs of the last century proving more efficient and flexible when it comes time to plot routes. But the problem with boarding one of these gas-smelling relics is that it costs a whole day's salary.

The triumphalism that surrounded the arrival of the Chinese buses has faded in the media, as frustration with the immobility and deterioration grows among the public. Our mobility problems will not be solved with a couple more boatloads of new buses. These difficulties have deeper roots and solutions will depend on revamping a centralized economy that has condemned us to transport solutions from the Middle Ages. The image of a horse cart in use as a public bus is a common one in Cuba. Meanwhile the idea of having an urban metro system seems as remote as those long ago days when we beat Spain in having the first railroad.