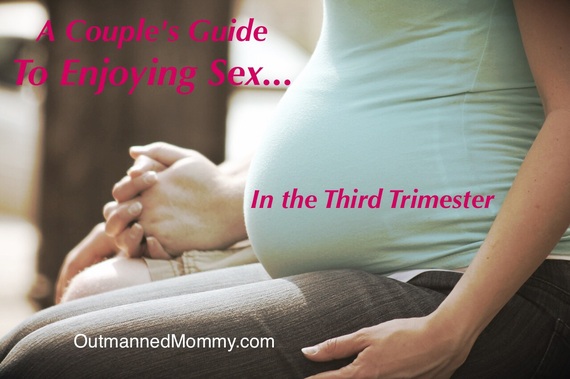 Most women are skeptical at the mere mention of sex during their final months, and especially weeks, of pregnancy. However, if treated with love, understanding, and attention to a few key pieces of advice, it can be a beautiful and mutually satisfying experience for both partners.

Ladies, you might even find yourself wanting to do it every day up until the day you deliver, which as it turns out, may come earlier than you expected...if you're doing it right!

Guys, just because she's ready to pop, doesn't mean she's always ready to "pop it in" in the bedroom. Foreplay is equally as important, if not more, during the final few weeks of pregnancy as it was before conception. Depending on the woman, she might be feeling very insecure about her expanding body, swollen breasts, swampy nether regions, and/or uncontrollable gas. As her lover, it is your job- nay, your pleasure- to demonstrate for her that she is still the most sensual creature you've ever seen...or smelled.

Don't be shy. Dive right in there and give her nipples a good tugging. She's gonna have to get used to that treatment in a couple weeks anyway, so might as well start now. Ladies, don't worry if at first you want to recoil in pain, fear, disgust or some combination of all three. These are all completely normal reactions to someone touching your now absurdly sensitive, breathing-on-them-wrong-feels-like-a-thousand-razor-blades, always standing at attention, leaky, splotchy, hairy nipples. Isn't breastfeeding beautiful?

Stimulating the breasts during and after pregnancy triggers a release of hormones responsible for uterine contractions. These delightful chemicals will be responsible for starting labor and reshaping your uterus after birth. Start thinking of those cold sweat-inducing stomach cramps as the first steps toward reclaiming your pre-baby body.

Once you've found a good rhythm between fondling, contracting, and dry-humping, it's time to migrate a little farther south.

Ladies, now would be a good time to excuse yourself to the bathroom in order to dispose of the urine-soaked panty liner you've been using as a sneeze guard for months. This isn't 50 Shades of Grey, he's not going to be removing anything with his teeth. He has standards. If you're feeling especially generous, it might be worth splashing a little water over your sweaty girly parts or at least giving them a good once-over with a baby wipe or moist towelette.

Men, I'm guessing she probably hasn't been able to trim the hedges down there for quite some time, so you're going to be flying blind in the thicket that is now growing rampant on your wife's hoo-ha. Refrain from making any hipster beard jokes and start loving that muff like it's your new best friend, but don't dally too long because your lady will only be able to lay on her back for a few short minutes before the pressure in your abdomen builds up to the point of passing out...or passing something else. Either way, you need to get in and out in less than five minutes. Think pie eating contest rather than fine wine tasting.

Now that everyone is in the mood, it's time to find a comfortable and welcoming position from which to begin the real love-making.

Guys, seeing as how she has a bowling ball-sized ticking time bomb of gas and fluids standing guard above the entrance to her secret garden, missionary position is probably out, unless you are either double jointed or extremely well-hung. If either of these are the case, feel free to skip ahead to the next section...and kudos.

For the rest of the short-wanged human male population, there are only two remaining positions which offer the necessary access and stimulation needed to please your very lucky lady: cowgirl, and doggy-style.

Ladies, while you may feel like you could throw a lasso around a spry young steer, chances are all you're gonna do is throw out a hip mounting this steed. Slow and steady is the way to win this race, and while it may take longer to get into position than to finish the deed once you're there, hopefully it will be worth the extra effort.

This time-honored position certainly offers good face-to-face contact, except you can't actually bend over far enough to kiss each other without suffocating or cracking one of his ribs, so really it's just a boob-jiggling, double chin-enhancing, National Geographic special that he's gonna lay back and enjoy. Have fun with it, and if you're feeling inspired maybe add some chanting and call it a baby-inducing ritual dance.

Guys, the one major problem with this position is that it requires your already exhausted lady to do most of the heavy lifting, which thanks to the extra fifty pounds she's been carefully cultivating over the last eight or nine months will probably result in hot flashes and profuse sweating from every nook and cranny.

Speaking of her nook and cranny, it might become impossible to determine from whence the array of slurping, squelching, and farting noises originated. Best not to think about it.

This often-maligned position offers a very different vantage point for the gentleman connoisseur. While allowing adequate airflow to her most private areas, it might draw unwelcome attention to some other familiar pregnancy friends: the hemorrhoids, and their lesser known cousins, the vagi-rhoids.

I hate to be the harbinger of bad news, but ladies, your underparts aren't going look good again for a very long time, so he might as well get used to the carnage now. Besides, let's face it, your vagina could look like the bride of Frankenstein and he'd still be excited to see it. Just dim the lights, tell him to grab those hips and go town. It might even help to relieve the sciatica you've been agonizing with over the last few months. Think of it as multi-tasking.

Extra points for the man who, when faced with even the most evil-looking varicose veins simply slaps on a Tucks pad, slaps you on the ass, and keeps going without skipping a beat.

Orgasms: The elusive and mythical unicorns of the sex world.

Of course, the most important factor in any sexual position is whether or not it is pleasurable. This is especially true during pregnancy given that until this point in the pregnancy few things have elicited more pleasure than a truly satisfying bowel movement.

There comes a point where it starts to feel like nothing will again be right with the world until that baby is out your body, and while you may vow to never again allow a living creature inside you, sex may be the answer to your problems. More specifically, good sex!

The name of the game here -- and if it wasn't already, shame on you -- is mutual orgasms.

Guys, it's all very well that you can get yourself off every time, but so can any bored mammal with a thumb. I've been to the zoo.

Ladies, it's not just enough to go through the motions of sex, not if you want to reap the full benefits. You actually have to enjoy it, which between contractions, getting slammed from both inside and out, and the knowledge that the last time you really let your hair down got yourself into this situation in the first place, is a pretty tall order.

But don't despair. It turns out, his sperm may have gotten you into this mess, but they might also be able to get you out!

Remember all that lovely nipple-torture from earlier? Well, between the contractions brought on by the combinations of nipple stimulation, your own orgasm and the chemicals found in semen, you can actually begin the process of readying your body for labor and delivery.

Of course, as always, timing is everything.

Guys, just like with foreplay there is a sweet spot between "wham, bam, thank you ma'am" and dragging it out so long she has to pee half way through. Sure, your 14 seconds of breathy, frantic sexual prowess may have gotten you this far, but it's not gonna cut it anymore. So grab a nipple, settle in for the long haul, and get creative.

Finally, when it's all said and done, be a gentleman and fetch the lady a fresh towel. Do not make her roll off your sweaty body like a beached whale while you basque in your post-orgasmic glow. Be a team player and everyone wins.

So there you have it, folks: the complete couple's guide to rewarding sex during the third trimester of pregnancy.

Men, play your cards well and she might want to have sex every day from now until her water breaks. Trust me, nothing will please a pregnant lady like the prospect of NOT being pregnant any longer.

Ladies, if you do everything right, and are very lucky, you may only have to do it once.

Either way, take full advantage of this pre-baby opportunity to enjoy one of the finer things in life, because soon you might find yourself asking advice about how not to fall asleep during sex, what to do with excess breast milk while making love, and how to enjoy your sex life while co-sleeping.

Once a cognitive psychologist in the field of memory, Mary Widdicks now spends the majority of her time trying to remember if she fed all her children each morning. The irony is not lost on her. Her writing has been featured on sites such as The Washington Post, Scary Mommy, and Brain, Child Magazine. In February of 2015 she gave birth to her first daughter and is now happily drowning in a sea of pink. Follow Mary on Outmanned or Facebook.

More:
ParentsPregnancySexcouples
Newsletter Sign Up
Raise the kind of person you'd like to know
Subscribe to our parenting newsletter.
Successfully Subscribed!
Realness delivered to your inbox