In the great tradition of American muck-raking (pun intended), this brilliantly written book on the cattle industry ropes you in with its folksy, down-to-earth tone and wry humor. Disarming or not, Cowed provides a serious look at the cattle industry's enormous hoofprint on the American landscape -- and psyche.

You'll learn amazing things about the effects of cows and CAFOs -- concentrated animal feeding operations -- on our health, water, soil, vegetation, ecosystems, and polity. As Cowed reveals, the collective impact of our 93 million cows is clearly worth ruminating on.

Whereas cows are the nominal subject, Cowed is also about all the resource issues just mentioned plus energy use, fertilizer, organic food, federal food inspection, greenhouse gas production, waste management, biofuels, diet and nutrition (Bossie's and ours). Plus much more.

So Cowed in effect is about capitalism, resource exploitation, and sustainability, as these themes play out against the panorama of America's rangeland and cattle ranching, dairying, and feeding operations.

Yet Cowed is no environmental screed nor dull moralizing treatise on the evils of eating meat nor a polemical rerun of Cowspiracy. Instead, it's an entertaining, even-handed but unflinching exposé of the wide-ranging abuses of industrial-style cattle raising and dairying.

Carefully researched and fully documented, Cowed can butt heads with any serious analysis of agriculture in America today. This important book should be on the desk of every legislator and public official who has a say about our farmland, rangeland, and agriculture industry. 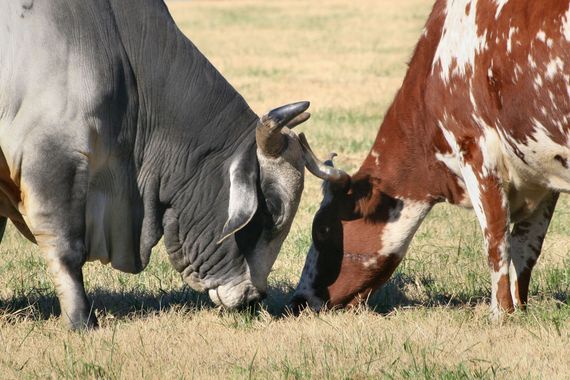 In exploring America's love affair with beef and dairy. Cowed ambles whimsically along the trail from farm-to-ranch-to-feedlot-to slaughter house until the industry's beastliness and benevolence are by turns laid bare, in unsuspected ways.

But I'm getting a little ahead of myself, and it's also confession time. This book is by my long-time friend, environmental advocate Denis Hayes, and Gail Boyer Hayes (husband and wife).

Denis is currently the President of the Bullitt Foundation in Seattle, where he directed the construction of The Bulllitt Center, perhaps the world's most advanced energy efficient commercial building.

Gail is an environmental lawyer and journalist who authored Solar Access Law: Protecting Access to Sunlight for Solar Energy Systems, and books on health.

Cowed is neither ideological and absolutist, nor doctrinaire and preachy. At the end of the day, the authors advocate reducing meat consumption, not totally going cold turkey. They also strongly advocate free-range, grass-fed, and grass-finished beef. (Grass-finished cows reach market weight by grazing, while grain-finished cows are fattened on field corn in feedlots, which often makes them ill.)

Cowed brings a "whole systems" perspective to its broad subject matter. We learn where cows come from historically and evolutionarily (wild Aurochs). Cow physiology and their extraordinary five-stomach digestive system are explained, as well as the myriad ways we've come to depend on cows.

If I had a dollar, well, maybe $100,000, for every fascinating fact I learned reading this book, I could buy myself a good-sized cattle ranching operation in Montana.

According to the Hayes, in an odd if not bizarre power play, call it bovine aikido, cows have domesticated us, not vice versa. Once they had to make a living on their own. Now, we feed and care for them, protect them from predators, and reserve millions of acres of valuable land for their use. 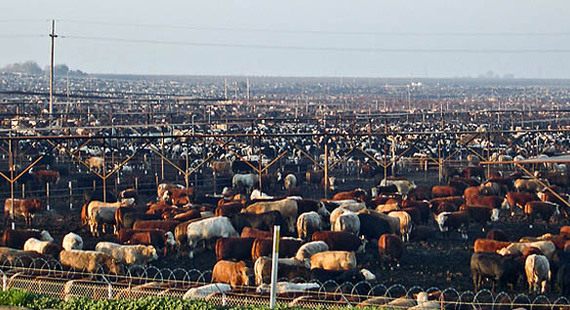 Thousands of cattle stretch as far as the eye can see in a large feedlot.

In that same holistic manner, Cowed also takes us through the care, feeding, and raising of cows before describing their slaughter, grinding, rendering, and reuse as animal feed, sometimes directly as cow-chow, which transforms Bossie the benign herbivore into a cannibal cow.

Shockingly, cattle are routinely drugged and fed foods that make them sick, just so they gain weight quickly. Often they are mistreated. "High per-cow production of milk rapidly burns out dairy cows, which are usually slaughtered at factory farms before they are five years old -- a quarter of their natural life span. So much stress is put on their bodies that the cows go lame, lose bone, and are prone to mastitis and other diseases."

Cowed is also about the risks consumers and farm workers are exposed to from herbicides, pesticides, heavy metals and other toxins. The dangers include human exposure to the natural and synthetic growth hormones, including endocrine-disrupters that we unwittingly ingest with our beef, and the pesticide residues we drink in our milk:

Can this really be legal? 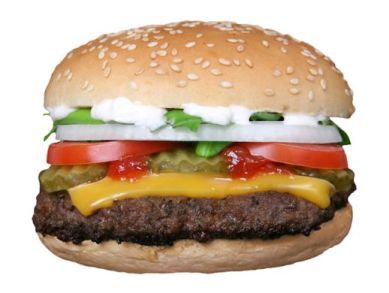 A well-garnished, tantalizing cheeseburger with all the trimmings may nonetheless conceal some odious contaminants.

Cowed also tackles the health benefits of organic foods; the travesty of mislabeling feedlot cows as organic; the consolidation of milk marketing, which can lead to the manipulation of prices; perverse federal policies that benefit large dairies over smaller ones; the advantages of managing range for biological diversity as well as for cattle, plus some yucky revelations about the mix-and-match origins of an ordinary hamburger. Hint: a single industrial lot of ground beef could contain fragments of meat from hundreds or thousands of cows, vastly increasing the risks of disease transmission from moo to you.

Cowed does indeed have plenty of dismal revelations: in contrast to our image of Elsie grazing contentedly in a verdant pasture, some "factory cows" live their entire sad lives indoors. "Aided and abetted by a short-sighted federal farm policy," the authors write, "Big [corporate] Ag treats cows barbarously, even as it ruins some of the best soil on the planet, destroys irreplaceable aquifers, fills the air with warming gases, and creates enormous dead zones at the mouths of rivers."

Many of the problems that the authors unearth can be solved in the U.S., they argue, by the action of individuals choosing to eat only organic dairy products and grass-fed, grass-finished beef. 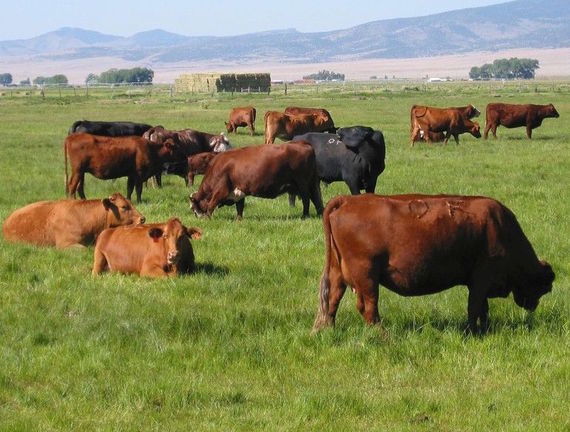 The Hayes conclude: "If we can pare [annual American beef consumption] down to 26 pounds -- half a pound a week -- and limit it to the healthiest, most sustainable beef, we can reduce pollution, global warming, medical costs, animal cruelty, loss of soil, loss of biodiversity, and germs resistant to antibiotics, while increasing the amount of land and water available for other uses. It's a dozen for one sale." Bam!

In case you were thinking this is pie-in-the-sky idealism, the authors have a rejoinder: "Consuming less cow is not pointless symbolism or a diversion from political action. In fact, it is a profoundly political act, a repudiation of the powerful bovine industrial complex with its Beltway Lobbyists and Madison Avenue hucksters.

While current hidden subsidies make beef appear cheap, the Hayes write, "they harm people, the land, and cows." "Instead, wouldn't it make sense," they ask, "to focus subsidies on foods that would make us healthier? Our complex, expensive subsidies are not promoting public health, sustainable agriculture, small farmers, or local production."

The authors urge that an Environmental Impact Statement ought to be done on the next US farm bill to provide a full accounting of all the environmental impacts of the nation's industrial cattle operations.

Finally, holding no cows sacred, the book punctures the myth that we don't have enough land in America to feed our population organically. From their in-depth scholarly and field research, the authors contend that we all could be eating healthy, grass-fed, grass-finished, hormone-free, organic beef raised on family farms and other smaller-scale spreads where animals are humanely treated.

That would indeed be an important step closer to a sustainable economy, a healthier people, contented cows, and greener pastures.

John J. Berger, PhD. (www.johnjberger.com) is an energy and environmental policy specialist who has produced ten books on climate, energy, and natural resource topics. He is the author of Climate Peril: The Intelligent Reader's Guide to Understanding the Climate Crisis, Climate Myths: The Campaign Against Climate Science, and he is working on a new book on solutions to the climate crisis.