In this beautiful world, animals have as much right to live as human beings. In totality, the entire earth is a common property of all of us. It is our world and it is their world. Should humans have rights? Most of you would say yes. People often ask if animals should have rights, and quite simply, the answer is "Yes!" Animals surely deserve to live their lives free from suffering and exploitation. Just because we are at the top of the food chain, does that give us the right to take animal rights away? A life is a life and it should be valued, no matter what you are. Animals cannot speak for themselves and for that reason we need to protect them. Protecting them is something we should take pride in, it is our responsibility. Animal rights is the belief that animals have an intrinsic value separate from any value they have to humans and are worthy of moral consideration. They have the right to be free of oppression, confinement, use and abuse by humans. By respecting animal rights and having consideration for animal welfare, we also support ecological balance.

In his book Animal Liberation, Peter Singer states that the basic principle of equality does not require equal or identical treatment; it requires equal consideration. All animals have the ability to suffer in the same way and to the same degree that humans do. They feel pain, pleasure, fear, frustration, loneliness, and motherly love. Whenever we consider doing something that would interfere with their needs, we are morally obligated to take them into account.

Street animals all over the world are in a very bad plight. They live virtually wherever cities exist and the local human population allows, especially in the developing and the former second world. Street dogs may be stray dogs, pets that have strayed from or are allowed freedom by their owners, or may be feral animals that have never been owned. Compared to the rest of the world, street animals and especially stray dogs of Nepal are in a very pitiful condition. Approximately 26,000 stray dogs live on the streets of the Kathmandu city. Most of these dogs live in a miserable condition and most of them do not die a natural death. Nepal is one of the few Asian countries without proper animal welfare legislation. Most urban stray dogs are discarded pets which have become sick, pregnant or developed aggressive behavior, or the offspring of such animals. Outbreaks of rabies are often traced to unvaccinated street dogs, one of the most common carriers of the painful and deadly disease. There are dozens of hit and run cases by speeding vehicles leaving stray animals wounded and severely injured. The plight of stray animals is devastating.

In the course of controlling the population of stray dogs, the government had started the campaign of killing them. However, the program was later discarded after it gathered massive criticism. Despite the efforts of both the government and private sectors, the number of stray dogs is yet to go down as expected. While the reasons for this tragedy are multi-faceted, they are not complicated. In addition, the problems that cause animals to become homeless and end up in the streets are preventable, with the solutions in all of our hands. If the government agents can provide proper management, the situation can improve greatly. Many dogs would have their conditions improved if they had obtained vaccination and other medical treatments timely. Proper spaying and neutering of these animals would stop further growth of animals in the streets. This would solve the problem largely.

Founders of ANGELS (A Network of Guardians giving Extra Love to the Strays), Er. Manisha and Nisha Pandey feel that animals help us reconnect with nature and balance and animals, especially the strays deserve human love, compassion, and respect. Nisha said, "It is not new to see innocent animals being beaten, tortured or injured in so many parts of the country. Animals feel pain. They think. They have emotion. They have souls. Why should they be less than we should, only because we are dominant? Are we still ruthless barbarians, who only keep things if they are useful? Hurting weaker ones is a sure sign of weakness and backwardness." 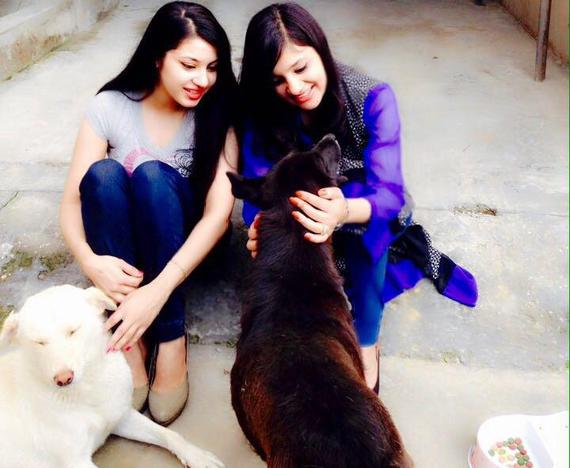 Manisha Pandey adds, "Capital city is being dogged by stray canines. So many are living in a pitiful condition and it is heart wrenching to see our innocent non-human friends suffer like that. They have equal rights to live as humans. Animal rights should not just be a philosophy--it should be a social movement that challenges society's traditional view that all nonhuman animals exist solely for human use." As PETA founder Ingrid Newkirk has said, "When it comes to pain, love, joy, loneliness, and fear, a rat is a pig is a dog is a boy. Each one values his or her life and fights the knife."

Only prejudice allows us to deny others the rights that we expect to have for ourselves. Whether it is based on race, gender, sexual orientation, or species, prejudice is morally unacceptable. The first step should always begin at home. Teaching kids to have compassion and empathy for their furry, feathered, and finned friends are vital for preventing cruelty to animals as well as in raising them to respect and treat those who are different from them with kindness.

Instead of just depending on the government to solve this issue, if we engage ourselves to the service of strays, this issue can be managed very easily. Participation is the most important thing required to solve any kind of problem and what we lack here is active participation and like-minded people who would not be scared to take that extra step for the right cause. Our lack of attention and awareness in this matter despite such a horrible situation shows that our consciousness has not evolved yet. We need to keep talking to the people who create the policies and argue for mandatory spay-and-neuter regulations and we need to educate. We need to educate people about the reasons to adopt older or injured dogs. We need to educate people how to teach their dogs so they can live in harmony with us. There are humans everywhere, but it is time to act humanely now and stop being the reason for the suffering of innocent animals. It is time to join hands, unite as one and help the animals who are at our mercy. It is time to raise our voices, it just might work."

Manisha Pandey, a member of PETA has helped many stray animals in Kathmandu. Her organization ANGELS aims to eliminate all the problems faced by the strays in Nepal. Her book, which targets to show people the bitter reality about the mistreatment of animals all around the world, is soon to be published.