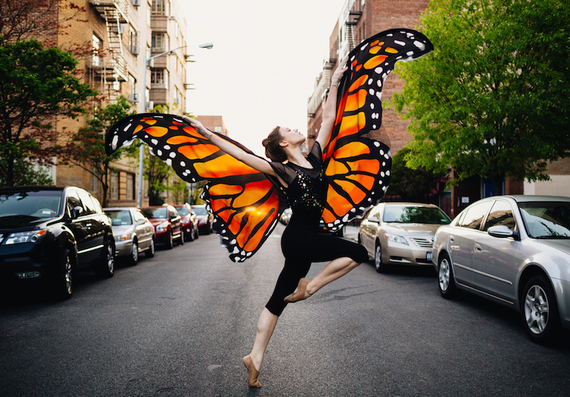 Gwynedd Vetter-Drusch in 'The Dance of Life;' Photo: James Jin

All milestones are worthy of celebrating, but in the world of experimental and developmental theater, a 20th anniversary is truly a reason to take notice and honor the individuals and/or organizations responsible. In this instance, the honored entity is the New York International Fringe Festival (FringeNYC) which should be applauded for its longevity and distinct role in harnessing the shear volume of creative projects it chooses from all its submissions, and then for its role in presenting the selected ones to the New York theater-going public for lo these many years. The guiding force behind the Festival is none other than its Producing Artistic Director, Elena K. Holy. Taking on this key role with the Fringe since near its inception, she has brought the Festival to the elevated status that it currently enjoys. From it's early years with only a handful of shows utilizing some sketchy venues which posed various technical and logistical challenges (bursting pipes and power outages were somewhat commonplace); fast-forwarding to now, where it is the largest multi-arts festival in North America and productions are presented in respected theaters often used by prominent Off- and off-off-Broadway companies.

This year's Festival runs from August 12-28 and boasts an amazing number of productions - 200 in all, presented in 16 different venues, with a total of 1,100 performances - whew! Through it all, the Festival has managed to keep the ticket prices very affordable--this year, actually, the same price as going to a movie theater in Manhattan ($18), but possibly giving you bragging rights to say "I saw it when it was first at the Fringe Festival." Productions that have gone on to successful lives beyond the Fringe include Urinetown (one of its biggest success stories--going from the Fringe to an Off-Broadway production and then on to Broadway), Matt & Ben, Never Swim Alone, The Jammer, Debbie Does Dallas, Dog Sees God, Brandon Teena, and Dixie's Tupperware Party, to name just a few. Notable performers and creatives who have participated in productions over the years include Bradley Cooper, Melissa Rauch ("Big Bang Theory"), Morgan Spurlock ("Supersize Me," CNN's "Inside Man"), Mindy Kaling, Tony Award winner Diane Paulus (Pippin), Alex Timbers (Rocky), Leigh Silverman (Violet), W. Kamau Bell ("Totally Biased"), Michael Urie ("Ugly Betty"), Naomi Grossman ("American Horror Story") and Chris Lowell ("Enlisted"), again, to name a few.

We were able to obtain an "inside scoop" on some of the productions that are already generating some advance buzz and would be worthy of your attention. But go see as many of these productions as you are able--it's fun getting caught up in the "festival spirit," and the Fringe offers some great ticket deals for people looking to attend more than one production.

All of this year's productions are listed in our feature: FringeNYC: Your Complete Guide to This Year's Festival; for more information go to the Festival website.

Our curated list is below, so start making your plans now!

Homo Sapiens Interruptus
Writer: Carlos Dengler
One-hour monologue. Behind a desk. It's smart. It's funny. And it's heartwarming. Join Carlos Dengler in an intimate setting as he talks about heavy metal, human origins, and his road from pizza delivery to rockstardom with the band Interpol.

Walken On Sunshine
Writer: Dave Droxler / Music by James Rushin / Director: Marcus Stevens
An anxiety-ridden filmmaker accidentally lies to investors about having Christopher Walken in his movie and embarks on a ridiculous quest to get Walken. Neuroses, quirky love, bad guys and cowbells emerge to derail him. Will he ever find Walken??

From Foster Care to Fabulous
Red House Arts Center
Writer: Patrick Burns / Director: Richard Israel
In this original musical, Patrick Burns takes on the role of late-night talk show host, detailing his foster care journey with a myriad of side-splitting songs, a plethora of jaw-dropping anecdotes and a cast of horrific, hilarious and heartbreaking characters.

Pryor Truth
The Collective-NY
Writer: Khalil Muhammad / Director: Marcus Naylor
Pryor Truth, a one man show, is a celebration and introspection into the life and legend of comedian "Richard Pryor". Pryor Truth gives us a raw moment with one of the artist's most beloved characters: Mudbone.

The Radicalization of Rolfe
M & R Productions in association with Glenn Krutoff
Writer: Andrew Bergh / Director: Abigail Zealey Bess
Austria in the last golden days of the 1930's. Messenger boy Rolfe, 17 (going on 18)is about to discover that forbidden sex and Third Reich don't mix. This dark comedy proves that B-characters have a destiny, too.

From the Deep
CMS Productions
Writer: Cassie M. Seinuk / Director: Lindsay Eagle
Fates intertwine in a new dimension, beyond space and time. Israeli POW, Ilan, believes his freedom is nearly in sight. Across continents, abductee, Andrew, awaits his captor's design. As time ticks away, they must learn to survive or disappear forever.

The Box Show
Writer: Dominique Salerno / Director: Sash Bischoff
One woman. 25 characters. All inside a cupboard! The doors open to reveal: a drunken couple in Vegas, a lonely Giantess, the entire Greek Army inside the Trojan Horse, & more! The space is limited, but the comedic possibilities are endless...

Lunt and Fontanne: The Celestials of Broadway
TBE Theatrical
Writer: Mark E. Lang / Director: Owen Thompson
Meet the most famous forgotten actor-couple in theater history, Lunt and Fontanne, played by a real actor-couple. This fast-paced new play covers their extraordinary partnership, from the 1920s through WWII and the 1950s, with cameos by Olivier, Coward and Brando.

Murmurs and Incantations
Emerging Artists Theatre
Writer: Dahn Hiuni, Music by Yuval Ron / Director: Dahn Hiuni
In search of peace of mind and artistic truth, a gay New York performance artist confronts the ghost of his grandfather, a rabbi killed by the Nazis. A poignant, irreverently funny drama about the Holocaust, AIDS, and existential angst.

The Princemaker
MirrorMaker Productions
Writer: Robert Gelberg / Director: Alessandra Affinito
It's an election year. Leslie Moore, a teenager with an unlimited bank account, finances the Presidential campaign of George Lee, a down-home congressman equally noble and naive. The Princemaker explores the politics of money and the money of politics.

Scratching
The Skeleton Rep
Writer: Britton Buttrill / Director: Ria T. DiLullo
Set in a dilapidated trailer in a Southern town, Scratching is a millennial drama about the lives of two blue-collar brothers whose pasts and futures intersect, causing a downward spiral of drugs, violence, illegal tattoos, unrequited love and the chance for redemption.

Thread
Little y Theatre Company in Association with The Vertical Company
Writer/Director: Elena Zucker
From NYC to Palestine, Mimi's world collapses with the inadvertent like of a long-lost love's dissident Facebook status. Identities unravel, as do the boundaries between fact and fiction, Jew and Arab, time and space. A psycho-cyber thriller.

Hysterical!
Fifth Wall Productions
Writer: Elenna Stauffer / Director: Deborah Wolfson
It's the Bandits' Best Year EVER! Until...one by one, the girls succumb to a mysterious illness. As the traditional pecking order is upended, the girls' relationships are tested. A poignant, cheer-full look at life on the cusp of adulthood.

Remember Me
Scandinavian American Theater Company
Writer: Minna Nurmelin / Director: Drew O'Kane
Helena is trying to move on from her past. Anna is in grave doubt about her own future. Two complete strangers struggling with identity learn to help each other in this unconventional and highly perceptive play from Finland.

Brewed
Writer: Scott T. Barsotti / Director: Jessi D. Hill
In this fast-paced thriller teetering between caustic comedy and warped kitchen-sink drama, six sisters must stir a pot. 24/7. They're tied to it. By trauma? By magic...? They stir, brutally brawl, and wonder: does this really keep Babette alive?

Off Track
Writer: James Comtois / Director: Tim Errickson
Ian, a Chicago reporter covering an impending transit strike, has a one-night stand who's found murdered the next morning. So, Ian ventures out to find the killer just as the trains shut down and strand him in a hostile neighborhood.

Pucker Up and Blow
Writer: Daniel Reitz / Director: Paul Schnee
David, a young actor with only children's theatre credits, is making his Broadway debut in a play by New York's "most inflammatory" playwright--but it means nudity and performing a lewd sex act. What's more important? Dignity or career?

The Coward: a Madcap Fairytale
The National Theatre of MatMadia
Writer: Maddy Campbell / Director: Matt Phillips
Possessed by an insane monster, a cowardly castle maid must battle gods and demons to resurrect the King she herself killed. This experimental, absurdist comedy revels in clowns, confetti, and blood. So shield those precious eyes, you cowards.

First Time, Long Time
The Disposable Theater Company
Writer/Director: Jeremy Stuart
You've tuned in to the Harland West Radio Show. All tales from the apocalypse are welcome, natural or otherwise. "...this play reminds us of the power of storytelling to provoke, engage, and jolt." Martin Denton, nytheatre.com.