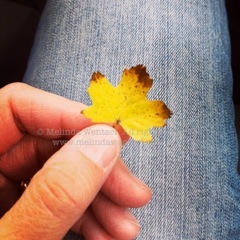 Thanksgiving is nearly upon us -- that grand and glorious season of thankfulness. I'd like to think I appreciate the people and circumstances that give me pause year round, but like so many others, I get caught up in life's hectic pace, losing sight of the tide of goodness that surrounds me each day -- even the goodness defined as bizarre. So as this storied November holiday approaches, it makes sense to revisit all for which I am grateful -- even the absurd blessings, that are blessings nonetheless.

For starters, I'm grateful that my kids haven't staged an ugly protest yet -- the one I fully expected to witness since I decided to serve lasagna for Thanksgiving, and not turkey. Maybe it's because they know I'll eventually cave after the holiday, slaving over a hot stove for an eternity making their favorite turkey pot pie and potato filling. Or maybe it's because they know the lasagna is store-bought, and they're comforted by the knowledge that I can't possibly screw up dinner.

Additionally, I'm incredibly thankful that my daughters' high school hasn't banned me from the premises yet, despite the fact that I once tried to deliver a fake butcher knife for a skit -- or that I've dropped off a certain someone's iPad, sneakers and/or clarinet roughly 47 times since early September. Surely, the middle school warned you I'd be coming.

What's more, no one in my immediate family feels compelled to pile in the car at an ungodly hour to go Christmas shopping on Black Friday, nor does anyone think it makes sense to make a wish list in July or to hit the stores on Thanksgiving Day -- which makes my tribe all the more endearing to me. For the record, I'll be shopping local... and probably not until December, unless you count the holiday cards I fantasized about buying because they were on sale. However, since that took place BEFORE HALLOWEEN, I couldn't bear to put them in my cart. Call me crazy.

I'm appreciative of neighbors, too, who have tolerated the hideous mass of autumn leaves that filled our lawn seemingly forever. Thanks to Eric and Crew at Slingerland's Lawn and Landscaping Service, I won't have to rake another cussed leaf until next fall. By contrast, I do not give thanks for oak trees. The ones in my yard, more specifically. Other oak trees are fine. Sort of.

Also, I can't begin to express enough gratitude for our wonderful contractor-carpenter-Mr.-Fix-It-Guy-Extraordinaire, Ed Gair, who has come to the rescue more times than I can accurately recount. He has fixed leaky toilets and replaced a number of archaic faucets, removed the 80's-inspired pink wallpaper that I loathed with all my being, painted ceilings, walls and woodwork when my brush flatly refused to be lifted, installed to perfection some of the most beautiful cabinetry known to man, planted a 1,200-pound, 34 square foot island in my kitchen (guaranteeing that it would NEVER fall to the basement below), hung lighting fixtures and rewired with ease, ensuring that no one would be electrocuted in the process. Not even my husband, who helped. Lo and behold, the man befriended my neurotic little dog, too, keeping the barking to a minimum while he worked. For that alone, I cannot thank him enough.

Further, I'm especially grateful that my iPhone still works and that no one died of amoebic dysentery after I dropped it in a toilet at a public restroom at Hersheypark Stadium. Of course, I almost perished from the sheer anxiety I suffered following the event, completely convinced that the photographs I had yet to download would be history. No, I haven't downloaded them yet. I'll get to it. Eventually.

In addition, I'd like to thank the universe for protecting my purse the bazillions of times I've left it somewhere unattended. Not once has someone rifled through it, although one time I thought that it might have been tidied up a bit.

Thank you also to the great multitudes of people who have transported my children hither and yon, to include Mr. Saville-Iksic (i.e. the time I locked my keys in my car at McDonald's and left my kids to fend for themselves at school). Thanks also to the people who covered for my husband at work so he could fetch my stupid keys. I suppose he deserves some praise, too, since he only mentions the incident once or twice a day. So that's something.

It's all about the small victories, people, and being thankful -- at Thanksgiving, and always.

Planet Mom: It's where I live, giving thanks. Visit me there at www.melindawentzel.com and www.facebook.com/NotesfromPlanetMom.

More:
Parenting ChildrenParentsBlack FridayHumor
Newsletter Sign Up
Raise the kind of person you'd like to know
Subscribe to our parenting newsletter.
Successfully Subscribed!
Realness delivered to your inbox