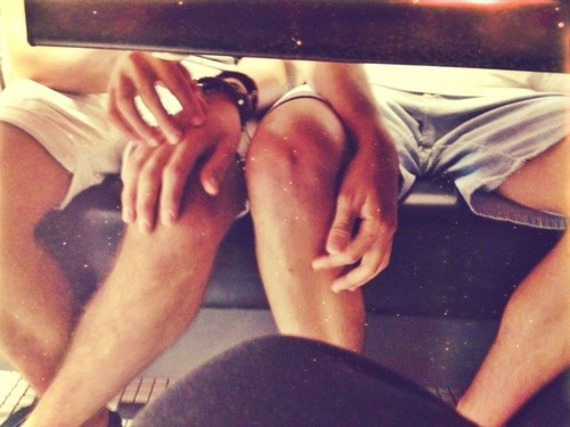 You know those moments that just seem like something out of a movie? You know the ones -- where you're literally expecting an uplifting song to start playing right at the climax of a tear-jerking scene, which you happen to be seeing live before your eyes? Well, I just witnessed an Oscar-worthy performance.

This weekend as I sat in Starbucks, writing -- I know, it doesn't get much more cliché than that -- I noticed a man and his son walk into the coffee shop. My gaydar immediately informed me that I was in the presence of my own kind. The boy was very handsome, with a GaGa shirt and rolled up jeans, he looked to be around 16-years-old. A man that appeared to be his father, whom could only be described as a man's man, accompanied him. Large and intimidating in stature, his father wore a camouflaged shirt and some rather dirty jeans.

A moment later another young boy, about the same age, came into the shop. He walked over to the first boy and gave him a loving hug. The father sternly nodded his head at the boy in a rather macho display of a greeting. "Uh oh," I thought, this didn't look to be the kind of guy that would be incredibly happy about having an openly-gay son. The boys walked up to the counter to order their over-priced lattes and the father stepped in to pay.

After getting their drinks and sitting down, the father said to the boys, "You guys be good," and gave them both handshakes (I told you he was a man's man). He told his son to call him when he was ready to be picked up, and walked out of the store. Facing the front door, I saw the father stop at the window of the storefront. With their backs turned to the door, unaware that dad was still watching, the boys leaned in for a kiss. To my surprise, the father's reaction was that of a beaming smile. His son was in love, and it didn't matter that it happened to be with a boy.

Inside I was a basket case. I held it together in public, but I really wanted to cry at the beautiful moment I had just witnessed. But then it hit me; I had just judged someone. I had assumed that because this man fit a certain stereotype that he was instantly against equality, and there was no way that he could possibly approve of his son's sexuality.

It's easy to become cynical and jaded, especially when it seems that we are all too often faced with devastating stories like that of Leelah Alcorn, who took her life because of the rejection she faced from her parents after coming out as trans. I myself was met with rejection because of my sexuality from much of my conservative family -- which has taken me years to overcome. That being said, it occurred to me that for a group that often faces so much judgment, people in the LGBT community can be quite judgmental ourselves. We can sometimes jump to assume that people hate us for our identity -- and many people certainly do -- but we can't forget that there are people doing better than we sometimes give them credit for.

For every story of a person writing faggot on the door of a gay couple, there is one of a father smiling while watching his gay-teen-son openly embrace a boy he cares for. For every horrible coming out story, there is the story of a family that meets their loved-ones with support and acceptance.

We certainly shouldn't undermine the struggles that our community faces. We shouldn't only show the good and ignore the bad. We shouldn't stop fighting for equity just because we've received it for some. But I have to say, those bad days when it seems like the odds are stacked against us, I now can think back on the scene I witnessed at Starbucks-a scene of love and acceptance from an unexpected source-and have a reason to smile.