In a dark forest, I fill a rickety cart with the sticks that litter the ground. I wheel the cart over a rough path back to my hut and check the traps I've left: a few scraps of fur, a handful of strange scales of unknown origin, meat, a few teeth. These are the fruits of my labor. They'll build waterskins, spears, torches -- rudimentary tools that will help me traverse an unknown and hostile landscape. Someday.

Back in my hut, a woman who identifies herself as a builder regains the strength she lost wandering in the vast wilderness. She is my only friend and confidant. I add some wood to the fire that lights this dark room. 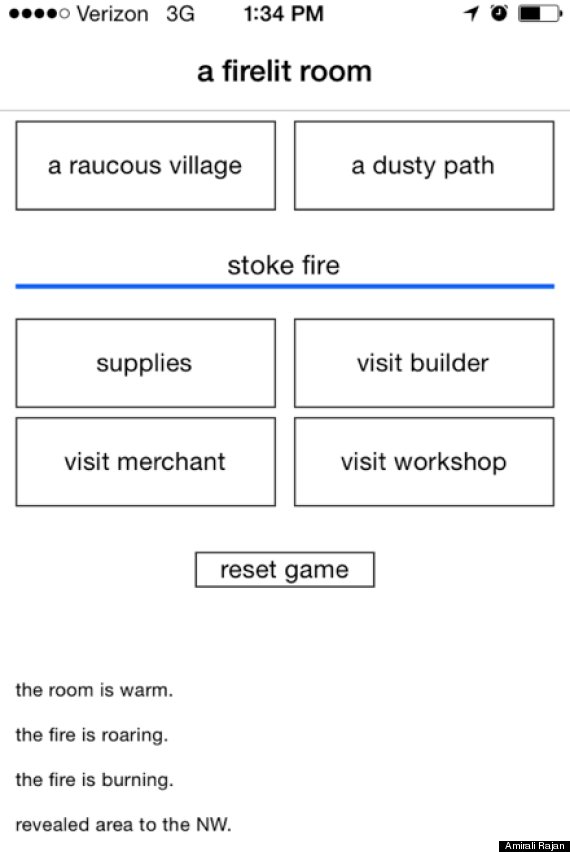 Don't let its humble appearance fool you; "A Dark Room" is full of surprises.

This is the world of "A Dark Room." What started as a browser game rose to become the top paid app in Apple's App Store, earning 4.5 stars between its 5,500-plus ratings. (At publication, the game now sits in No. 2 spot.) For 99 cents, the game unquestionably delivers on its meager price. I downloaded it yesterday morning and have played six to eight hours since then. Still, I would only guess that I'm halfway through the game's secrets, and I'm still eager to find the rest.

On an iPhone, the game looks like nothing more than some text boxes and lowercase font. It's minimalist, clean.

Gameplay is simple: Tap a button to gather wood. Wood keeps the fire burning. Get enough, and you can build a cart for gathering more wood, as well as traps for catching small game or huts to shelter other travelers. You become industrious. New tools emerge. Suddenly, you begin leading a village of other stragglers -- all the while, feeding your fire to stave off the darkness and cold.

Anyone who has played the browser game "Candy Box" will immediately recognize the style: the strategic and steady gathering of resources to buy build, or battle your way to success -- whatever that may be.

"A Dark Room" expands on that style by introducing a sort of story into the game as well, in its own dark and mysterious way. Occasionally, your character's thoughts flash across the screen: "awake. head throbbing. vision blurry." These short, often chilling statements make the harsh world around you a bit more clear.

But even they take an unexpected turn when an innocent musing on the villagers you've amassed becomes sinister: "They are slaves."

These are the twists you'll find in the corners of "A Dark Room" -- a game that's always unpredictable and always intriguing. You can build a metropolis, you can fight off intruders, you can enslave those around you, build better weapons, stronger armor, more powerful tools. But first you have to light the fire.