-- "Christmas Bells," by Henry Wadsworth Longfellow, written Christmas Day, 1863, in the midst of the Civil War

Christmas is just days away. Decorations abound. Brightly lit holiday displays adorn main streets across the country, and in shops and malls echoes of Bing Crosby singing "Silver Bells" serenade shoppers as they rush home with their treasures. But in all honesty, it's hard to consider Christmas 2014 to be "a season of joy." There are growing trends and emerging challenges that seem to cast a dark pall across our country. The environment that exists today does not have to portend a gloomy tomorrow. But if we are to chase that darkness away and entertain the prospect for a bright, optimistic future, we are going to take an active role in making it so. 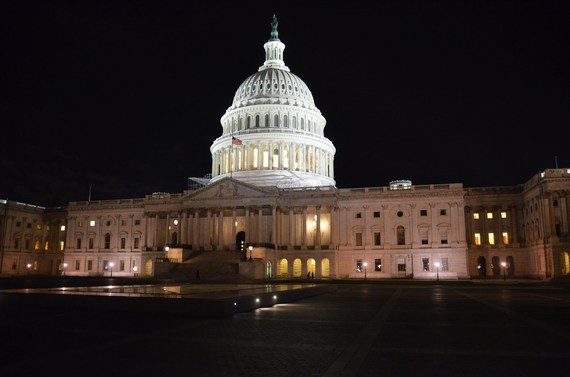 Washington DC, in the dark

It isn't hard to identify a number of troubling conditions and trends besetting us right now: internationally we have essentially entered into a permanent state of war; we know the National Security Agency has secretly spied on American citizens; we launch drone attacks that kill not only our enemies, but sometimes innocent men, women, and children who are often guilty only of being in the wrong place when a missile lands; and now we discover that some in our government have applied brutal and sometimes deadly interrogation tactics on foreign prisoners.

At home America suffers from unacceptably high levels of violent crime. The U.S. has the greatest prisoner population in the world; though we have a quarter of the population of China, we have more than a half million more in jails. Rampant and destructive pornography can harm those who view it, and its production exploits and demeans women. Not coincidentally, we also suffer an epidemic of sexual abuse. In recent days new questions of equal justice have arisen amid increasing racial tensions. Leaders at many levels in our country can't seem to tell the truth. And a fractious Washington languishes to accomplish even the smallest of tasks. It hasn't always been this way.

In his 1796 Farewell Address, George Washington gave his opinion on a number of issues facing the young country and made several suggestions on how to keep the nation safe, prosperous, and free for future generations. Specifically regarding public morality, the president said:

And let us with caution indulge the supposition that morality can be maintained without religion. Whatever may be conceded to the influence of refined education on minds of peculiar structure, reason and experience both forbid us to expect that national morality can prevail in exclusion of religious principle. It is substantially true that virtue or morality is a necessary spring of popular government... Who that is a sincere friend to it can look with indifference upon attempts to shake the foundation of the fabric?

Sixty-three years later that foundation was not merely shaken, but suffered an earthquake when the nation jettisoned virtue and morality as Americans slaughtered each other in the Civil War. President Abraham Lincoln sought to lead the nation back to the path of morality, virtue and peace by first admitting our "offenses" and then laying out a vision for restoration. In his second inaugural address, he said:

After the agonizing wounds of the Civil War and reconstruction started to abate, religious virtues and morals unquestionably exerted a positive influence across society as a whole, and played a role in America's rise to becoming a global power. But in the post-World War II era, our country began disengaging from those traditional Christian principles. One of the first departures came with the elimination of public school prayer as a result of the "Everson v. Board of Education" case in 1947 and "Engel v. Vitale" case in 1962, in which the Supreme Court ruled that prayer violated the 'establishment clause' of the US Constitution.

To be clear, I am a strong supporter of the separation of church and state. It protects the people from government dominating the people in the name of religion, and it protects all religions from domination by the government. But I believe that in our zeal to banish all public displays or mention of Christian principles we have harmed ourselves. Our Founding generation was wise by insisting that the United States "make no law respecting an establishment of religion, or prohibiting the free exercise thereof." But even deists like Benjamin Franklin and Thomas Jefferson were firm proponents of the value the country derived from religious principles.

Nevertheless, especially in the 1980s, 1990s, and 2000s, we moved further away from religious values, accelerating their removal from public view. We have to ask ourselves honestly, is our country better today than it was before we began divesting our government from all things God? Are we a more prosperous country? Are our citizens more law abiding, kind, and respectful? Is our government more responsive to the needs of our people? Is America more respected internationally? Are our leaders more effective, honest and trustworthy than before? The answers are self-evident.

It is uncertain which religious morals and ethics some in this country found offensive or in need of silencing. Some of the more common biblical values are: honesty, integrity, considering others as more important than oneself, respecting authority, honoring the government, compassion, empathy, helping the less fortunate, respecting others, having sexual purity, excellence in work, displaying a spirit of joy, peace, patience, kindness, goodness, faithfulness, gentleness, self-control, and of course above all, love for others.

Who among us wouldn't like to see our citizens, government leaders, police departments, court systems, and businesses influenced by the principles above rather than that which exists in some quarters? The First Amendment protects the rights of all Americans to follow their conscience on religion, to include following none at all, and to be free from coercion to do otherwise. But both our intellect and the Founding generation makes plain that we have not only the ability, but the obligation, to establish justice, insure domestic tranquility, and secure the blessings of liberty to ourselves and our posterity by the most effective means.

If many in this country believe that the religious principles articulated above are the best foundation upon which our nation should rest, giving us the best chance to so secure those blessings for every citizen, then according to the provisions and protections of the First Amendment for all citizens, they should be free to do so. However dark might be our present, and uncertain the future, there still resides in this country men and women with the heart, character, and courage to carry our nation back to a higher standard of moral conduct and a brighter future. For the sake of us all, let us hope those men and women rise soon.