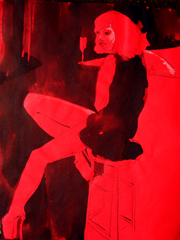 So I woke up to a pounding at the door. It was early morning, the bright California sun streaming in through the tree leaves and telephone pylons.

I threw on a dressing gown, ran down stairs and opened the door. It was Nick, the stand-up comedian who lives next door with a big beard.

"Nora's escaped. She is down on Sunset Boulevard. The cops are there!"

I was holding a stack of colored paper, trying to calm my beating, nervous heart, little beads of sweat glistened on my brow from the afternoon sun. I thought, in the low light inside, the bright white of normal drawing paper might be too conspicuous. I have been kicked out of clubs before. But I didn't really enjoy it and I really didn't want it to happen again.

I took a deep breath. I summoned all my courage; I armed myself with my big sunglasses and a NRA baseball cap and walked down Hollywood Boulevard.

The club looked closed. I had driven by before, cased the place, and there had been a big bouncer perched on a high stool out front. But now, as I walked up, there was no one; just a wall and a black door. My heart beat and I pushed it open.

It was dark. There weren't many people there; an old man hunched over a bottle, a man in a baseball cap who looked right into my eyes. I crossed the room to the end of the long lacquered-wood bar top.

The barmaid leaned across to cover the din of the loud music; she said something that I didn't hear.

"Yeah, whatever," she dismissed. Following a disapproving look from the man in the baseball cap, she added, "ID"

Having just turned thirty, I took this rather well. Armed with as girly a drink as I could think of, I slunk off to as dark a corner I could find. It was not as bad as the English club that I had been to previously.

The girl was chubbier than I thought that she should be. She vibrated her bubbly butt cheeks at the suited Asian man as he appreciatively deposited his one dollar bill. Then I caught a slight glance from under the platinum blond bouffant in my direction. Being a girl in a strip club is a bit like being the mistress at your lover's birthday party.

Strippers are much prettier than your average life-drawing model. But drawing in there is like playing a really hard computer game. The expert gamer, having left the room after getting up to the hardest level, passes you the controls. It's dark, they move really fast, and sometimes they are upside-down.

Downtown Los Angeles is schizophrenic. There are grand old buildings with ornate exterior moldings, ostentatious ex-bank buildings that are now converted to night clubs. LA plays New York in most TV shows and commercials. Downtown is populated by the homeless, dragging their card board condos; toothless, limping crack junkies from the eighties and my favorite, a pirate bum who actually says 'aagh'. Then on the second Thursday of each month, thousands of hipsters in haircuts from the west side and beyond come to see the Art.

When New York and London are so expensive to live, young aspiring artists can live in the sun, and for cheap in LA. I read in more than one art magazine recently that LA is rivaling New York for new, vibrant, up-and-coming art. And I love the egalitarianism. Next to the high priced white walls, the locals sell $10 posters and finger paintings on the brick walls outside.

I arrived at the Hive; an artist collective gallery where I had a small piece. There are other galleries, some with marble floors, others with Charles Shaw wine, but the Hive is really about the artists; building communities, sharing ideas, artists seeing each others growing and changing practice.

I was excited to see everybody and show them my drawing from the club earlier that day; and tell them how I woke up...

"I ran about the house, grabbing clothes, out to the back yard to get a crate. I accidentally hit the panic button on my car keys, waking the world with frantic honking, then the unlock button, and drove down the hill."

I had a captive audience of two collectors in high heeled boots, one very good oil painter in a brown corduroy jacket, and a lovely man with a huge, slightly distracting nose. "It seems that Nora, who does look like she swallowed a watermelon, her pot-belly almost dragging on the ground, went for a stroll to find something yummy to eat.

"We live on a very, very steep hill and once at the bottom apparently she didn't much fancy the steep hike back home. It is only about two hundred yards to the bottom and as I leaped out of the car and flung the crate onto the street, the police were laughing and taking photos with their phones."

As I stood there, jabbering away, I tried to remind myself to talk about the art at art shows, not my reprobate pet pig.