I have been a frequent patron of Iron Hill Brewery in Lancaster, PA since the doors opened in 2007. My husband and I are both mug club members and take advantage of as many special events as we can. I have always enjoyed the restaurant for the considerable selection of food on the menu, and for the finely crafted and house-brewed beer. As I am also a home brew enthusiast, I was thrilled when given the chance to spend a day brewing with Paul Rutherford and Chad Reiker, the head and assistant brewers at Iron Hill Brewery.

Brewing started at 8:00am and I arrived eager and ready to observe. Little did I know that I'd be getting down and dirty with them! I donned the pair of knee-high rubber boots provided for me and pulled on the elbow-length rubber gloves that would protect me from any accidental splashes from hot liquid or caustic chemicals. The beer of the day was a pumpkin ale, containing 2-row Breiss, Weyermann Pils, Weyermann Munich, Breiss C-60, Weyermann Caramunich, Fawcett Pale Chocolate, Northern Brewer Hops, East Kent Golding Hops and an 18-generation yeast. One thing I learned quickly is that being a brewer for a brewpub such as Iron Hill is much more involved than just making beer. Before the restaurant opens, Paul checks all the special glasses at the bar area to ensure they are clean and spotless. If there is anything on the glass, it can ruin the head which is where much of the aroma in a craft beer is located. Without a good head, one loses some of the delicate nuances of the beer. 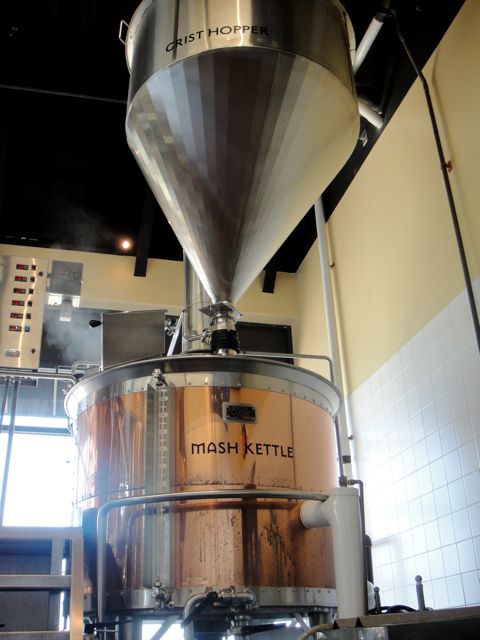 Quality beer starts with the right water. Different pH balances work better for different beers; for example, pale ales turn out well with hard water and stouts turn out well with soft water. Special ingredients are added to the water before brewing to achieve the prime pH. Grains are the base of any beer; they are cracked and fed through the grist hopper and into the mash kettle right before the hot water is added for optimal freshness.

Mashing grains is much like steeping tea in that the hot water is added, held at a certain temperature, and allowed to "steep" for a specific amount of time. During the mash, starches in the grains are changed to sugar, which is what will allow fermentation to take place. After the 750 pounds of grain completed their hour of mashing it was all transferred through a pipe to the lauter tun. This liquid is called wort (pronounced wert). 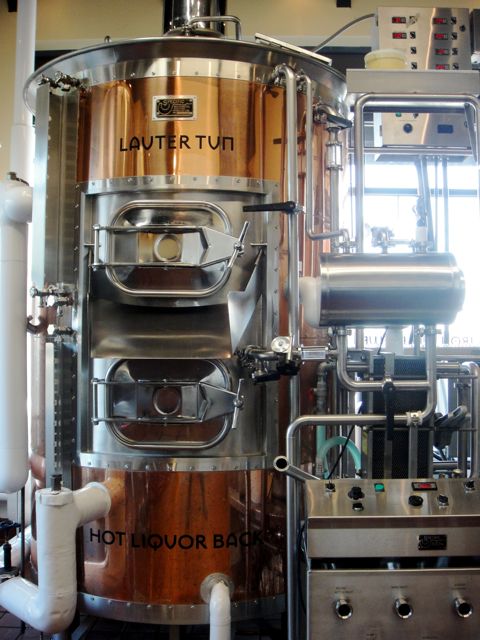 Think of a lauter tun as a giant kettle with a colander built inside to catch the grains as the wort filters into the bottom, the hot liquor back. Once all the wort has been transferred to the lauter tun, I was put to work in the mash kettle. Equipped with a headlamp, I walked up the steps to access the small opening at the top of the mash kettle. Pushing aside any claustrophobia I may or may not possess, I lowered myself down into the belly of the kettle, using the single rung along the inside to assist in my efforts. Using a scrub sponge and hose, I cleaned the entire inside surface of the mash kettle, making sure I chased all the grains down the small drain.

By this point I was sweating, wet, hot, and working muscles I haven't used in awhile. I realized that large-scale brewing is not a glamorous job in any sense of the word. It is, however, full of the glorious scent of wort, which smells like a warm bowl of Grape-Nuts.

After I cleaned the mash kettle, the wort was ready to be transferred from the hot liquor tank back to the mash kettle where it would be brought to a boil and have hops added to it. The process of transferring the wort includes running water over the grains in the lauter tun to extract as much of the sugars as possible. The entire process of lautering took one and a half hours. Once the required amount of wort was in the mash kettle and boiling, I added a bucket of hop pellets.

Brewing has a constant ebb and flow of activity. One must work fast and within time constraints here and there, but then there is a period of waiting. It is during these waiting periods where we tasted and took scientific measurement of the amount of sugar in the wort using a refractometer, and also when we cleaned. The cleaning included shoveling three trashcans full of spent grain from the lauter tun. 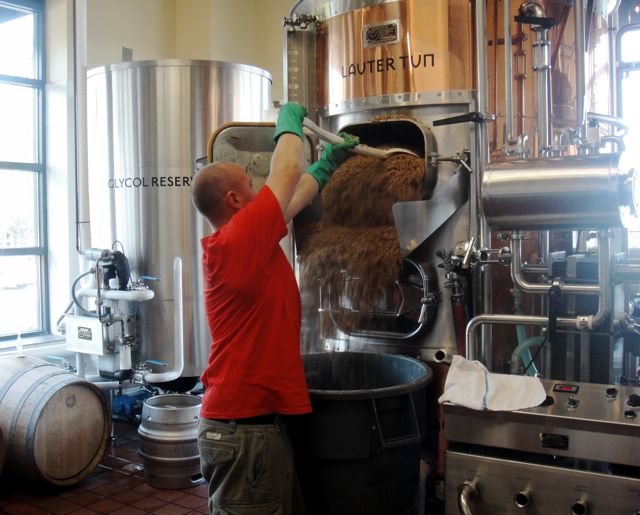 A local farmer collects these spent grains and feeds them to his cows. Earlier this year Iron Hill had a pig roast, and the farmer fed a pig using the spent grains; later, the pig the guest of honor at the roast. Now that is a wonderful example of buying fresh and buying local!

After the wort was boiled for the necessary amount of time, more hops were added and it was boiled some more. The fermentation tank was already prepped and ready for the wort to be added, sanitized thoroughly using a base wash, acid wash, neutral wash, and finally flushed with hot water. The yeast was carefully handled to prevent any contamination from getting into the fermentation tank. Cleanliness is godliness in a brewery, because any foreign bacteria or other organic matter that is introduced to the yeast can ruin the entire batch of beer. No one wants that. While the yeast starter was being prepared for addition to the fermentation tank, both doors allowing entry to the brewery were locked to further prevent any outside contamination. 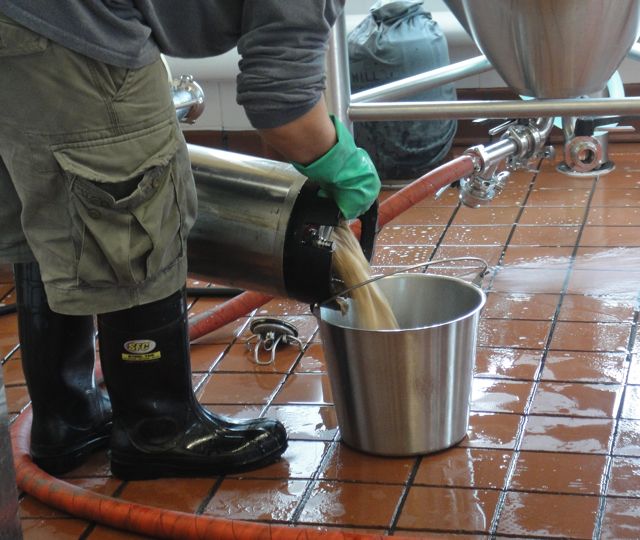 As soon as the liquid yeast starter was poured in, the fermentation tank door was quickly closed and sealed while the rest of the wort transferred from the mash kettle. Iron Hill's website has a nice page containing a visual representation of the brewing process with simplified descriptions.

This day of brewing made half of a double-batch of pumpkin ale. The day after I assisted, pumpkins studded with cloves were roasted, chopped, and added to the wort during the boil. Spices were added as the pumpkin ale was filtered to allow for a freshness that wouldn't be achieved if added earlier. Stop by at Iron Hill Brewery's Lancaster location and check it out! The Pumpkin Ale is now tapped and ready to be enjoyed.

Iron Hill Brewery currently has eight locations, an extensive food menu, and a sure-to-please selection of house beer along with specially crafted beers unique to each restaurant. Check out their bottled reserve beers as well! The mug club is a great value and includes perks such as invitations to members-only events and deals on beer. The head brewer is given a loose rope when it comes to the special beers and can create and adjust recipes as desired. Congratulations to Iron Hill for recently winning awards, including Gold for the Pig Iron Porter at the Great American Beer Festival. Iron Hill Brewery in Lancaster also recently tapped a Rauchtoberfest, which has a delightfully subtle smokiness thanks to a 50% substitution of smoked malts for regular malt. It pairs especially well with anything on the menu that is smoked; I recommend the Char-Grilled Flat Iron Steak that is served with a smoked cheddar macaroni and cheese.

If you live in the area or are just passing through, stop by an Iron Hill Brewery and eat, drink, and be merry! 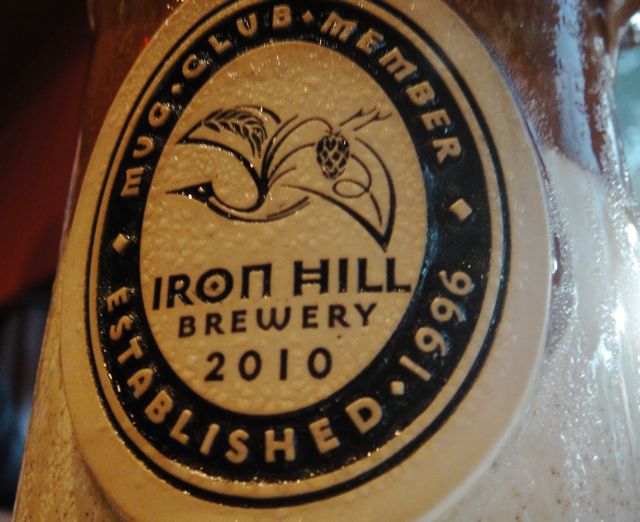