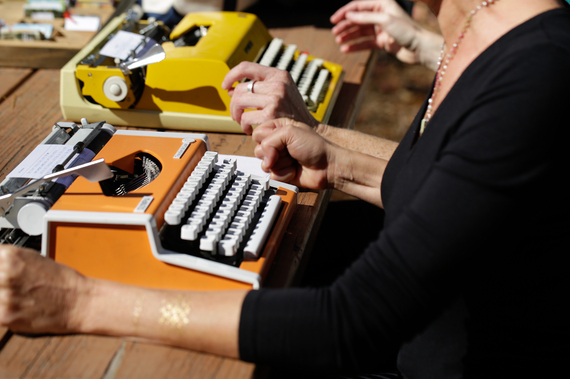 It's 7:30 on a Sunday morning, but my partner and I are already up, dressed, and swigging hasty sips of coffee as we pack a pair of typewriters, a long card table, two chairs, and a cigar box filled with business cards into the car. We are heading to Brooklyn to write poetry. We'll be in Williamsburg, setting up pop-up style, on Bedford Avenue and South 4th Street in front of a salon, whose generous owners are permitting us to occupy the valuable real estate that is their storefront sidewalk. We're even bringing along our vintage caravan, a 1965 Covered Wagon trailer we converted into a creativity hub two summers ago, which also serves as the iconic symbol of our mobile business, Food for the Soul Train.

This morning, we are under-slept and under-caffeinated, but the usual weekend lolling doesn't apply when you're trying to cobble together a living through your creative work. 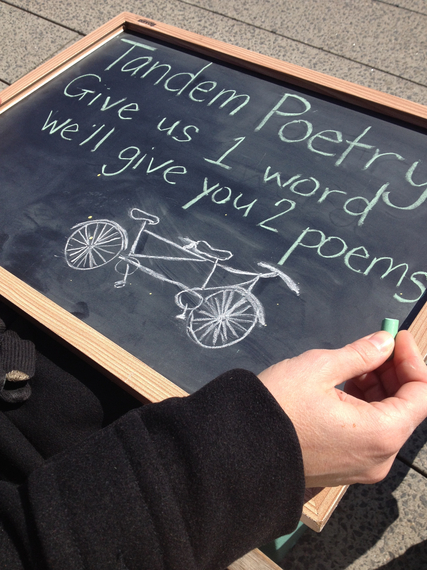 Last fall, we were issued a $250 fine for accepting a donation for poems we wrote on The High Line on National Poetry Day. Later, we learned of the vicious debate swirling the city about buskers and other public performers. We hadn't done our homework before trudging our typewriters to the city, so we innocently accepted the few bills floated our way as we wrote and gave away our poems for two hours before a sharp-tongued park police officer whipped out her citation pad. We fought the ticket in court, but lost, and felt so discouraged by the outcome that we were nervous to attempt writing poetry in public again.

But here we are nevertheless, driving MAUDE (our Mobile Art Unit Designed for Everyone) through the Lincoln Tunnel, across 42nd Street, along Manhattan's lumpy, bumpy streets on our way to the Williamsburg Bridge, buoyed by Brooklyn's more relaxed police patrols and the assurance of the salon owners who said they'd vouch for us at the first sign of trouble.

The poetry we write on the street is entirely supported by, as Blanche DuBois once said, "the kindness of strangers." What happens is this: A passerby comes upon us, sees our two brightly colored typewriters and the sign that reads "Give us a word, we'll give you two poems" and may decide to stop. Then they take a moment to come up with a word for us to write from, my partner and I each scroll in an index card, and a few minutes later, we have two poems ready. We may or may not read the poems aloud, depending on the recipient's preference. And then, more often than not, they will slip into their handbag or wallet and produce a pinch of cash, and deposit it into our donation jar.

The exchange is often swift, though some will linger after we hand over the poems and ask us more about our work. We will then explain that this activity is part of collection of creative offerings we make, and sometimes that person will take our business card and add their name to our mailing list. Very occasionally, we meet a person who gets so excited about the poems and the process they've just been witness to that they begin to brainstorm about ways to bring us to their school, place of business, etc. The experience can be breathtaking, exhausting, educational, emotional, and profoundly enlightening for all involved. We never really know what's going to happen, which is part of the delight and challenge of turning such a private act like writing poetry into a more public spectacle. 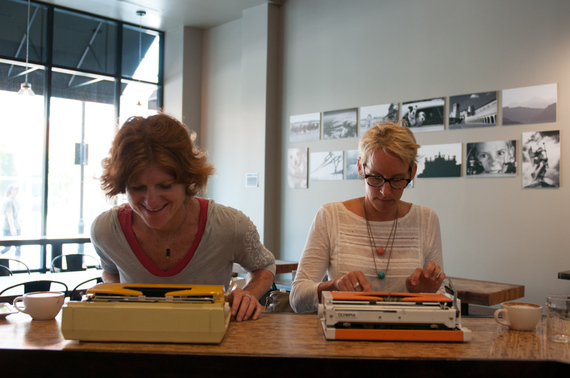 There is never a charge for the poems we write; when asked, we say they're free but that we welcome donations to support our work. The truth is, we haven't come up with a price that fits. It's not that we think the poems aren't worth anything - quite the contrary. They are a labor of love and devotion to craft and the power of words to bridge and deepen connections. But because they are personally crafted, the poems are worth something different to every person who receives them.

It's always fascinating to see what people put in our donation jar. Kids will typically offer up a dollar bill their parents have handed to them. (They tend to make an elaborate gesture of handing it over.) Depending on their mood and reception of the poems, grownups will toss in anywhere between $2 and $20. A few times it's been more. Once in a while, someone will dig into their pockets and come up with a quarter, or a clutch of dimes, or their own business card. We accept it all with equal gratitude and graciousness. It's a living, after all. 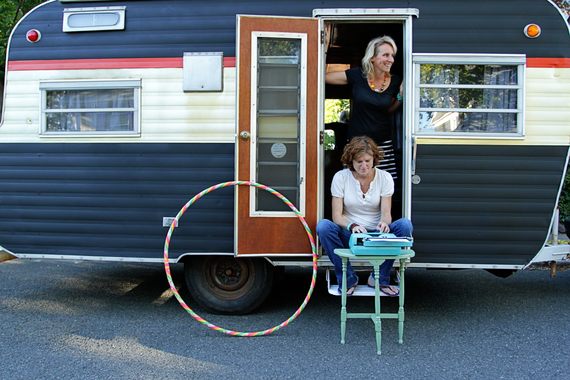 Today, on Bedford Avenue, the takers are few and far between. We thought the caravan would attract some attention, but everyone who passes by us seems sleepy or distracted or hungover or just not interested. What's more, as the day progresses, we wonder if we've picked the wrong neighborhood entirely. The median age seems to be about 24, which means the nostalgia of typewritten anything isn't just lost on our potential crowd - it was never there to begin with. We've also seen a rash of articles lately about pop-up poets in New York and other cities. Perhaps our offering just isn't edgy enough? Maybe we are, quite literally, yesterday's news?

Still, we press on. A young man in khaki shorts stops and asks what we're doing. We write him poems based on his word, "resilience" and then he tells us a little about his stresses as a newbie on Wall Street and how he's trying to stay upbeat even though the work is so tough. We read him the poems, he is touched by our efforts and digs into his back pocket for a wallet, unearthing a few stray dollar bills. Later, a gaggle of women come by - two sisters and their friend. We write poems about pineapples and they are exuberant. The sisters show us their matching pineapple tattoos and toss a $10 bill into the jar.

A man in a sparkling white chef's coat appears out of nowhere. We think, for some reason, he wants to see the trailer. "It's open," we say. "You can go inside." Instead, he comes closer to our table. "I'd like a poem," he says, a little on the shy side. "What's your word" we ask. Without missing a beat, he utters "Brisket," then nods toward a restaurant across the street. BrisketTown. We start writing and I tell him we'll deliver the poems to him if he needs to get back to work. He does.

When I enter the restaurant a few minutes letter, a delicious waft of smoked meat greets me. I wander back to the open kitchen. The chef-man is there. He looks up and I hold out the two index cards. He has a $5 bill in his hands. "Thank you," he says. "I like to support the arts." 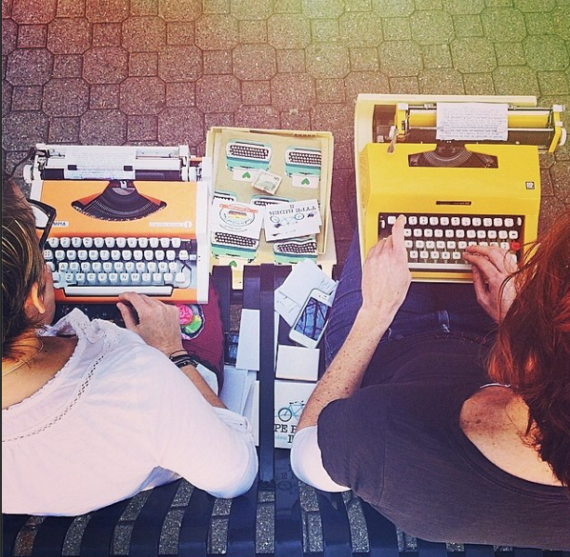 Time both slows and speeds on our tidy square footage of sidewalk. Runners gallop by. Late risers shuffle to brunch. In between typings, we hula hoop, juggle, adjust our seats to find elusive shade. The jar, by degrees, begins to fill. Mid-afternoon, a man circles the street, then returns to our table. He asks if we can decide on a word for him. He says he's newly married. He seems in a bit of a daze. We hone in on "embark."

"How much do they cost?" he asks. "They're free," we say. "You get to decide." He's uncertain what this means. "Give me a ballpark," he continues, leaning in. "What do people normally give?" We get a little squeamish. This isn't like buying a pair of jeans, or paying the accountant her hourly fee. "It's different for everyone," we waffle. "Alright," he says. "I've got to go to the ATM." He puts his cell phone on the table. "For collateral," he says.

We begin to write. He returns, and his wife appears from down the block and joins him. She reads our sign, then asks him what word he chose. "Embark," we tell her. Her nose scrunches almost imperceptibly, but not quite. "I like 'Moment,'" she says, after a pause. "Okay," he responds, and shrugs at us. "Okay," we say. We scroll out our index cards and replace them with blank ones, write "Moment" at the top. When we're finished, he asks for the poems to be handed over without a reading. "They're for later," he elaborates and clutches them with one hand to his torso. He moves his other hand toward the jar. After he leaves, I look. $60. 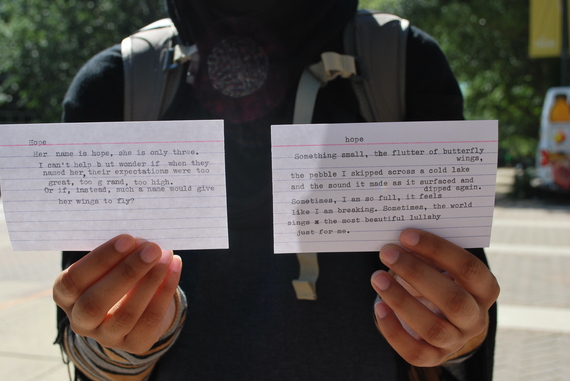 At 4:00, we pack up our things and thread our way back to New Jersey via the BQE and the George Washington Bridge. We stop for gas a half-mile before 278. I reach into the jar and pull out a $20 bill to pay. Traffic begins to snarl as we approach the Deegan Expressway.

We pull into our driveway, exhausted but almost delirious with laughter. Two dollars and fifty-eight cents!!

Greeting us at the door is my stepson, age 14, who holds up his hands and shows us a rash snaking its way between his fingertips. Poison ivy. He's highly allergic, so we know a trip to the doctor is imminent, and likely a round of steroids and topical creams to boot. We lug our belongings into the house, put the money in our wallets.

It looks it won't be there for long. 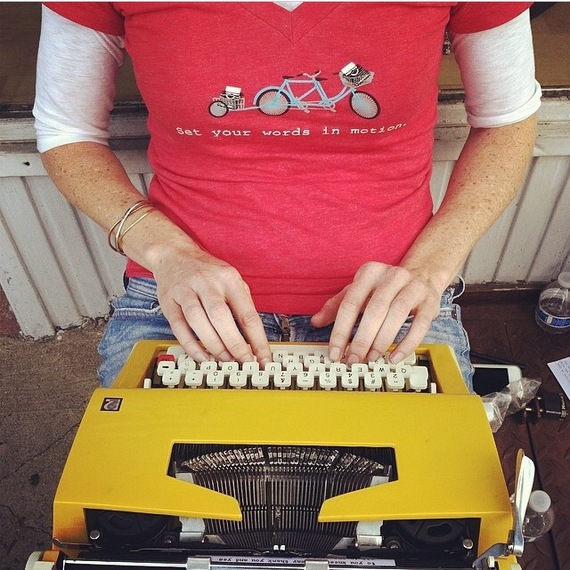