It was not my first IEP meeting. Hardly. My 75th team meeting to be exact. With three boys on the autism spectrum, I am a professional IEP parent. We joke that I should have my own coffee mug at the table. I could have wallpapered my home by now with the stacks of required paperwork handed out by law at every assemblage.

It wasn't even the saddest thing I've ever had to do. I've been through three diagnosis moments with my sons. A couple of years ago I had to make the choice to pull one of my boys from the regular classroom into a subseparate autism program that I knew there would be no coming back from. I've sat through meetings based entirely upon the bullying my child has been the victim of.

This meeting was for my oldest son who had just started high school. He had wanted to try to take an elective and go without the extra academic help he had needed for so long. He ached to be a typical kid in high school who gets to enjoy the extras. My children have had to miss out on these extras for so much of their childhood. While other children are enjoying their extracurricular activities or time with friends, my boys so often spend their time at doctor appointments, therapy, or receiving extra help.

He just wanted to take a fun elective. Video production. We agreed to let him give it a shot. In the weeks that had turned from summer to fall, it had become his favorite class. He lit up talking about the projects they were working on and the new kids he had met.

But then there was the flip side. The school had asked me to come in because he was struggling in all his other classes. Failing several in fact. The alternative to his elective was a class called academic support. The class where you receive help in succeeding in all your other classes. The class where you do additional work while your fellow students are in their elective or joking around and socializing in regular study hall. The class that you walk briskly to and swiftly shut the door behind you because you hope and pray none of your peers saw you enter. To my son, it represents everything he wishes he could make disappear from his life.

I knew what they were going to say. I knew the decision I was going to have to make. He needed the academic support. He is a brilliant boy with an intelligence that blows his peers out of the water. He has a MENSA IQ. He takes endless pride in it. But unfortunately, his executive functioning challenges get in the way of his intelligence being reflected in his work or on his report card without support.

I sat in that meeting and tried painfully to hold back the tears. My voice was on the edge. My throat ached. I paused between sentences in hopes that the emotion would leave me. A hundred times in these years of parenting I have been on that precipice. The wave of emotional pain rising in my chest. The sadness enveloping me. And almost always, I am able to push the tears away. Each time, at the last moment when I am about to allow the words that I am hearing to actually reach my heart, at the very second when I am about to be human and truly feel the sadness of what I am being told, I pull up out of the nosedive and right myself into position to fight for my child.

"Pull him from the elective," I quickly said. I tried to keep it brief. "And wrap it up so I can get out the hell out of here," I thought to myself. The room grew warmer, the oxygen in the air seeming to lessen with each breath. And then it happened. The tears came -- and not just a few. For the first time in quite some time, I wept. In a conference room filled with strangers. With artificial light and stiff chairs, and a school clock on the wall loudly ticking the seconds as they went by.

I wept for all the times I was met with a barrage of clinical terms for all the things that I thought were just my little boy's adorable quirks. I cried for all the birthday invitations my boys never received. My heart ached for all the afternoon phone calls from school relaying the difficult events that had happened that day. For the many Facebook posts I had read of all the typical things other children my sons ages were doing. I wept for all the times my boys just wanted to fit in and be like everyone else, but couldn't.

Because a mother's sadness is like that, you see. Like a back that gives out on you without warning. For months and years you carry heavy things without recourse. Then one day you unassumingly reach for a pen and you are frozen -- paralyzed by the weight of all you have had to carry all this time.

I quickly gathered myself and was able to say the words once again. I wiped my tears and cleared my throat. "Pull him from the elective and put him in academic support." I stated calmly. "Where do I need to sign?" We do what we have to do.

Being a nurse in quality assurance, I've read through endless medical records. Not long ago, I came upon a letter from an insurance company to the mother of a 10-year-old boy with autism. It was a letter stating that they would no longer be paying for his therapy because the doctors who had reviewed his case felt that he had "reached his maximum potential." I stared at those words for quite some time as they uncomfortably settled in my bones. Suddenly I was with that mother as she opened her mail at the kitchen counter with her children happily playing in the next room. I was with her as she herself read those words about her baby boy. This must have destroyed her, I thought. But then I thought what was probably closer to the truth. The words taking her breath away like a punch to the gut. The tears almost coming -- but then halted by her children's requests. Her stuffing the letter back into the envelope and placing it with the piles of others. Her taking her children to the park and drafting another appeal letter in her mind as she pushed her son on the swing. Because that's what we do.

I left that meeting on that gray, rainy day and hurried to my car. I had two doctor appointments to schedule, one insurance company phone call to make, and three teacher emails to return before I was due in at work. I reapplied my makeup, checked all my boxes, and walked into work an hour later with a smile on my face. Just another day in the life of a mother of children with special needs.

Later that evening, I curled up next to my son on the couch and broke the news of what was going to happen at school. We sat together in the sadness of it. But then we moved on to how accepting this help would make him even stronger, how with some extra support and his amazing intelligence that he would be an unstoppable force. He amazed me with the grace and courage with which he accepted the news. He always does.

I lay awake hours later that night staring at the ceiling. My brain raced furiously thinking of ways I could make up for this to my son. Maybe there was a video production class somewhere close by that I could sign him up for. What if I picked up more hours at work to pay for a private tutor? There must be groups for older boys with those interests, I thought. I would look tomorrow.

Because, in that moment, I knew what I really needed to do. Alone in the dark, I let the tears come. This time I didn't stop them. I felt the sadness to my core. I sobbed and I heaved and I let the pain seep through every inch of my body. I did not stop until there was nothing left. And then I prayed to God to give me the strength for another day to be what my children need me to be. The strength to lead them on this path. To fight for what we need to, but to accept what we must. To honor the heartache, but to find happiness anywhere and everywhere we can. After all, that's all any of us can do. 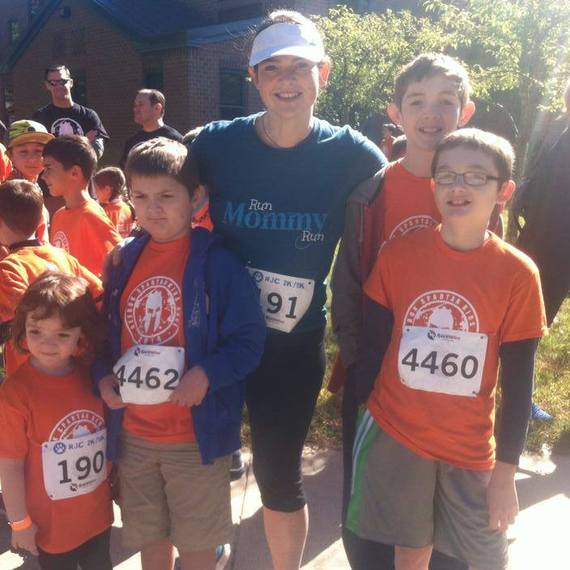 More:
Parentsspecial needsAutismautism parenting
Newsletter Sign Up
Raise the kind of person you'd like to know
Subscribe to our parenting newsletter.
Successfully Subscribed!
Realness delivered to your inbox