On any given day, I'm struggling to achieve my word count: 600 polished words. That's what I aim for, daily, in my writer job. I can sweat over one word. I might take a short walk or tune into Facebook...but only after the 600 are done. It doesn't sound like a lot, but they add up. Meanwhile, on any given day, another ambitious American woman is building an empire - one that eclipses even that big, old holy one: the Roman Empire.

James Franco calls Hillary Clinton "the most interesting woman in the world". How cool is that title? Cooler than, say, Miss Universe. Or cooler than Cleopatra who was, arguably, in her time, the most interesting woman in the world. Or, in later generations, Jackie Kennedy, Princess Diana, or the iconic Malala. Hillary as President could be compared - if you go back 1200 years - to a sort of female Charlemagne, leader of the Holy Roman Empire who was definitely the most interesting guy in the world, for centuries. His job was to unite, lead, and govern the disparate European medieval cultures. His role became "changemaker" who strengthened shared economies and brought cultural change to Europe.

Because of modern technology, Hillary has far more advantages for empire-building than Charlemagne ever dreamed. In one day, she flies to two or three cities to address crowds of thousands. She huddles with her staff, fine-tunes speeches for the next day's events or fundraiser that evening. She calls or sees her daughter, gives motherly advice, gets millennial advice, and bonds with her granddaughter. She meets with stylists for hair or clothing. She watches a select set of news clips. She plans how to respond to her opponents' attacks and counterattacks. She lays out actions she will take in the first months as leader of the U.S.A., and, thus, the free world.

Hillary is a human action figure that keeps going and going, battle after battle, and rarely flinches. (I imagine the warrior Charlemagne would have loved his own action figure, TV coverage and Twitter). While I'm moving dishes from the dishwasher into my kitchen cabinet, Hillary is planning how to fill her cabinet - those Secretaries who will run our federal government. (How I long to have a secretary. Can you pick up the cleaning and my mother? Write this paragraph for me? Coffee with cream, ASAP!)

She selects on which celebrity show (with Fallon, Colbert, Ellen, or SNL) to appear, and calibrates which interview to accept. She consults with her campaign director and campaign manager. She strategizes with candidates for Senate and Congress, planning how to support them in their own campaigns. She eats on the run as she runs for the highest office in the land. She collaborates and studies how to improve America's massively complex health care system, for the masses, while I figure out which doctor I can afford to see.

She discusses the tragic plight of Syrian refugees and efforts the U.S. could make. She educates herself on climate change which is growing as fast and big as the refugee crisis. She develops policy on women's issues, immigration issues, humanitarian issues. She synthesizes positions from her military and national security advisers about ISIS. She adds names to a shortlist for her first Supreme Court Justice nomination, one of the most critical decisions she will make early on. She attends a birthday party (plays pin-the-tail on the elephant?). She coordinates appearances with Michele Obama or the President.

She beats herself up again (probably) over mismanaging her burgeoning email accounts, and don't we all? But, because of her far reaches into the world, she receives or sends a basket of those deplorables every day, whereas I (gratefully) have only a hundred or so to mismanage. Charlemagne, the lucky dude, never faced this problem; he had messengers. But did his enemies kill the messengers, or, were there hostile leakers such as Julian Assange, or perhaps message hackers like the Russians? You bet.

Hillary utters a zillion words a day. (You'd cough, too!) While I'm taking a short quiet walk in the woods, away from words, she is negotiating crowds, shaking hands, listening to people's needs, persuading voters, covering countless miles and neighborhoods. She doesn't take a daily catnap like I do.

When I am sleep-deprived I'm ineffective, bitchy, off-balance. Hillary must be sleep-deprived on the frenetic campaign trail, yet she appears bright, focused and ON - every hour. She can't afford a bad hair day (not any more). She must be at the top of her game, and perhaps don some armor with her makeup, to spend part of her day dealing with smears and insults. She remains strong and civil, knowing no man running for president ever had to endure such a relentless barrage of excremental incivility. Charlemagne's army or followers would have put a stop to such behavior, in the time it took to shoot an arrow or drag some base ruffian to the dungeon.

But we allow it. Every day we acquiesce to those who seek to drown this woman, or prosecute her or throw her in jail or put her in front of a firing squad -- her, Hillary, our 30-year civil servant, international voice for women and children, the very first female who braved a rise to the top where only men have been -- with their tactless factless asininely mindless vendettas which lead one to ask,"Have we regressed to medieval times, the Dark Ages, that Charlemagne sought and fought to elevate into reason and light?"

And she's done it twice now. Whereas the second time's a charm, so is Hillary. She is more charming, engaged, encouraging, and real this time around. She has more depth, warmth, humor and dimension than in the first run. I know her better. I analyze her every move. She inspires my confidence by risking more than before. I like this mover and shaker, this cultural warrior woman. Her courage, stamina, guts and bottomless brass grow wider/taller/thicker each day. Madame Secretary is my go-to action figure, one I think about when I need to get fired up to write 600 words.

Most of the world is rooting for Hillary, not just slightly more than half of America. But then there are the haters. Unlike me and most people I know, Hillary has to deal with haters every single day. My Facebook friend, author Pam L. Houston, writes: "The haters on both sides seem to completely disregard the fact that she's a human being." Not just an action figure, or avatar, but a real human being. "She is tireless, so I will be tireless, and I hope you will be too. This does not feel like a good time to figure that somebody else has it covered. We are in a unique moment in American history, a moment where we have the potential to shout a loud and resounding and landslide-producing 'Enough!', a call to change this culture for women."

I agree with Pam: Hillary deserves a hand. Thousands of supportive hands. Anyone can lend a hand on any Day in the Life of Hillary Clinton in the form of words - a relentless barrage of words from kindred spirits. Words are a form of action. (Become your own action figure!) At the very least, we can say just one word: ENOUGH. We can say it once, or 600 times a day. Now that would add up! If we all say ENOUGH enough, it will be loud enough. 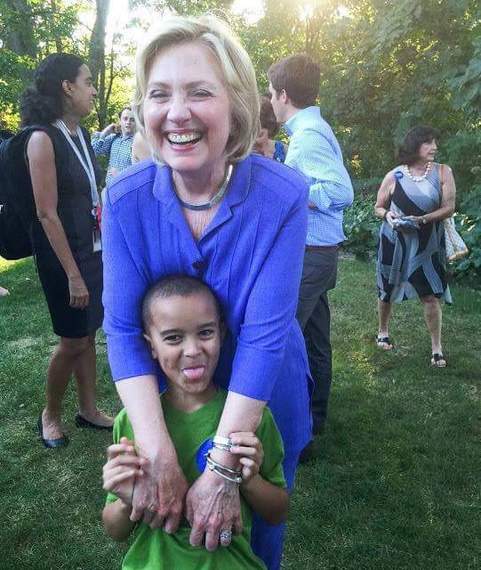