Sipping a morning cup of tea on the terrace of the Consulate Hotel half way up Main Street in Jamestown, St. Helena's village capital, under a first-floor balcony effigy of Napoleon in full military regalia, right hand tickling his left tit, certainly affords a chance to capture the island vibe. 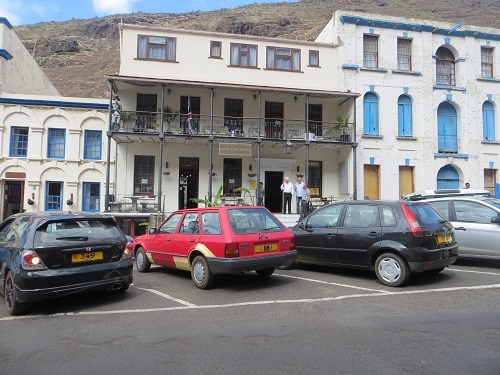 Veranda of the Consulate Hotel

It's time for a respite from the Napoleoniana and scenic wonders of the mountainous hinterland to watch life stroll by, and to laze about town, if you can call Jamestown a town as it threads its way from the blue South Atlantic through stark cliffs up a narrow, arid ravine.

With 850 of the island's 4,200-odd inhabitants - a mixture of European, African, Indian and Oriental blood - it's not even St. Helena's largest settlement. That honour belongs to Half Tree Hollow, with 1,100 residents clinging to the steep hillsides high above, invisible from Jamestown, but clearly visible on the approach from the sea. 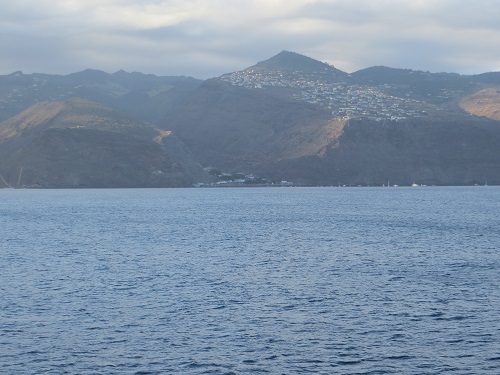 Jamestown at sea level, Half Tree Hollow on the slopes above
Even Longwood district, near Longwood House, Napoleon's final residence, clocks in with more people at some 950. But Jamestown is the island's most historic village, with the oldest Anglican church in the Southern Hemisphere - St. James built in 1774 - and numerous handsome Georgian manses lining Main Street. 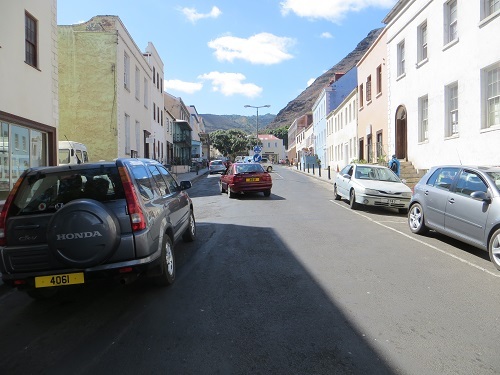 Main Street
Just to rub Old Boney's nose in it, a Union Jack is fluttering to his left, and to his right across the street is the blue house, now an inn, named after his nemesis, the Duke of Wellington. So take that, Napoleon Bonaparte. 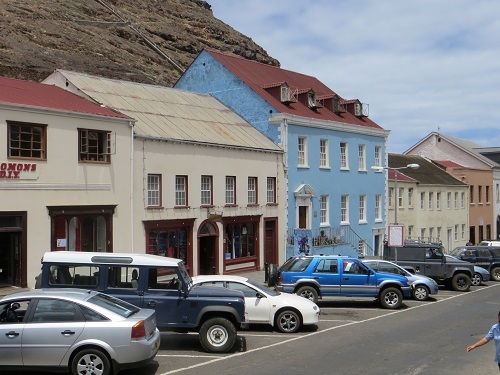 But to show there are no ill feelings towards the island's most famous and most reluctant resident, Main Street splits a few yards further up into two, Market Street on the right and Napoleon Street to the left. 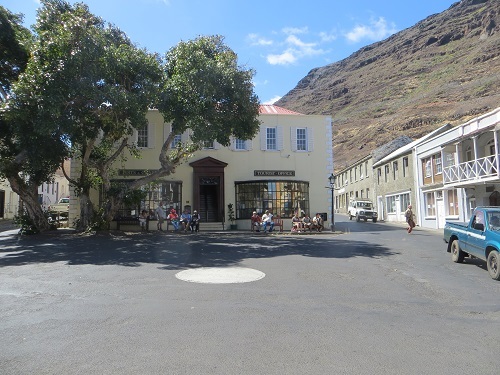 Where Main Street divides into Napoleon and Market

A familiar looking gent in a red helmet, portly and white-bearded, rides up to The Consulate on a dirty great motorbike. It's the island's Baptist Minister Rev. Graham Beckett, who was all tarted up in priestly garb at the recent Remembrance Day ceremony.

Local and UK police officers, in caps with black and white chequered bands, stroll past the post office across Main Street, nodding to and chatting with all and sundry, as is their wont. 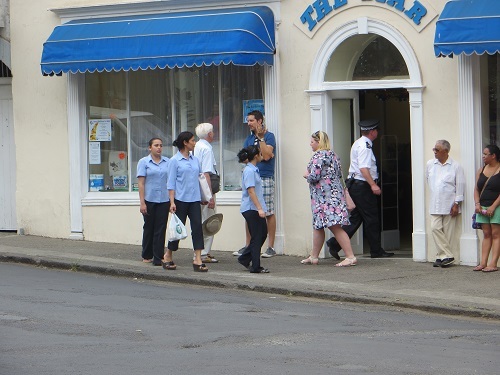 A grey SUV drives past, a shiny silver crown replacing numbers on the front and back plates - the governor's car. A leather condom wreaths His Excellency's standard to its little wing mast since His Excellency is away on leave.

Inside The Consulate, past the snack bar wall totally covered with pictures and cartoons of Napoleon, the Iron Duke and numerous other remembrances of the Napoleonic Wars, the wheel of the Dutch East India ship Witte Leeuw (White Lion), sunk here in James Bay by a Portuguese carrack in 1613, adorns the entrance to the drinking bar. 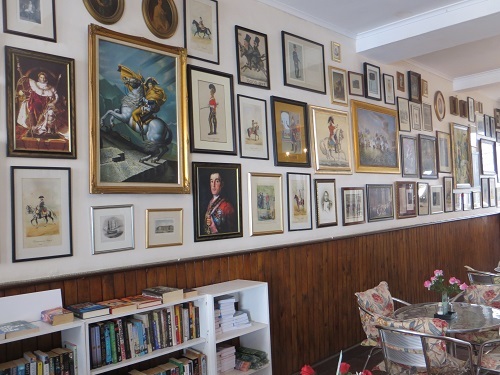 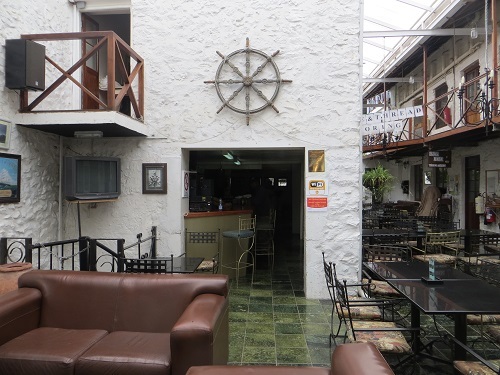 The wheel of the Witte Leeuw
Of more immediate interest, given that this is such a small community, are the posters on the wall - between a large model sailing ship and an upright piano. They bear a swivelled naked midriff. The warning in white on a red hexagon says it all: NO MEANS NO. 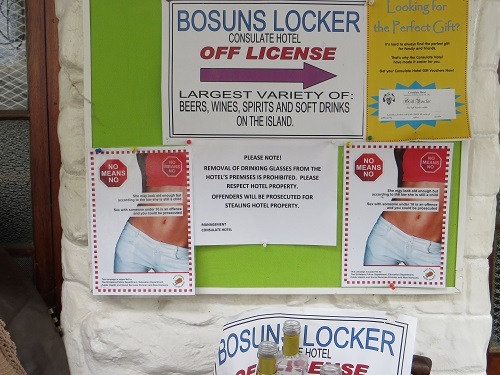 OK, it's nothing like the sex scandal on Pitcairn Island a few years ago when all the young children seemed to have been raped and otherwise sexually abused - but still.

Across the alluring midriffs they proclaim: 'She may look old enough but according to the law she is still a child. Sex with someone under 16 is an offence and you could be prosecuted.' 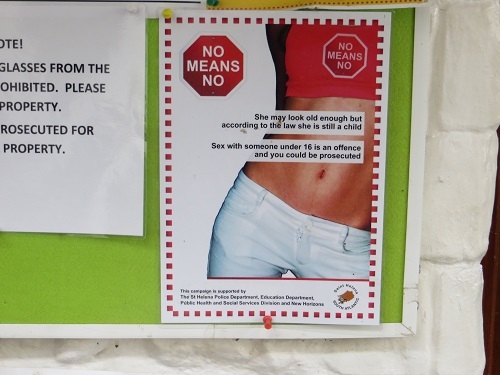 Police have been sent from the UK to deal with the issue, and this intrusion into island life and culture has led to some unease among the Saints (as St. Helenians are known), who feel that a full frontal attack on the issue is perhaps not the best way to deal with the problem.

But it explains why Her Majesty's local three-cell prison houses several sex offenders among its population of 11 men and one woman. One of the prisoners is serving 11 years for doing 'very nasty' things with children, according to a prison officer. 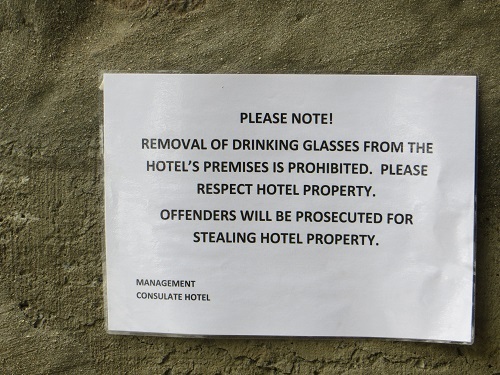 If you judge by the number of these posters everywhere on walls and pillars, glass-napping would seem to be the national sport, regarded as much more serious than under-age sex.

Rev. Beckett, who is from Durban, South Africa, and has been here five years, cites sexual promiscuity among the problems here, but he does not go into the details.

Other posters warn against domestic violence. 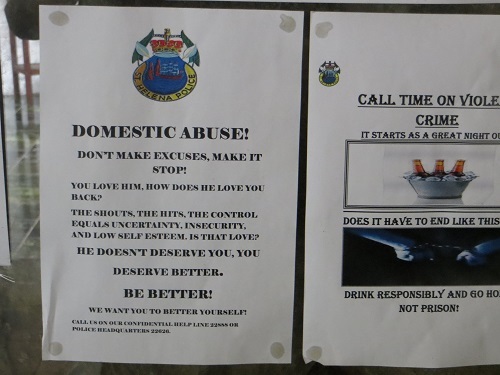 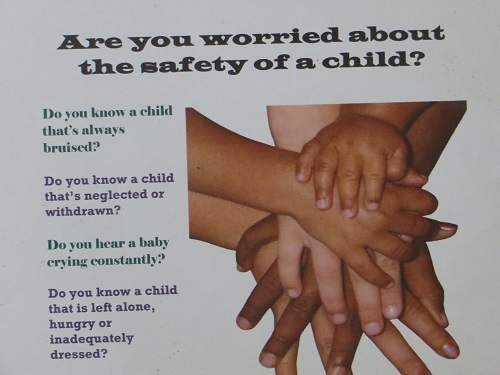 It's time to leave the midriffs and move on down towards the South Atlantic for an early lunch.

'Behave yourself,' quoths Matt, one of the UK police officers who sailed in with me on board RMS St. Helena, as I descend the steps from The Consulate's verandah. I promise not to kidnap any glasses. 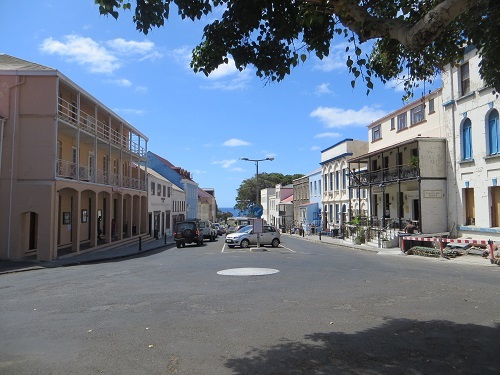 Moving down Main Street towards the ocean

Despite the aridity of Jamestown's ravine, flowering trees in crimson, violet and yellow grace its waterfront and 17th and 18th century moat, ramparts and restored castle fort, spreading out into Castle Gardens. 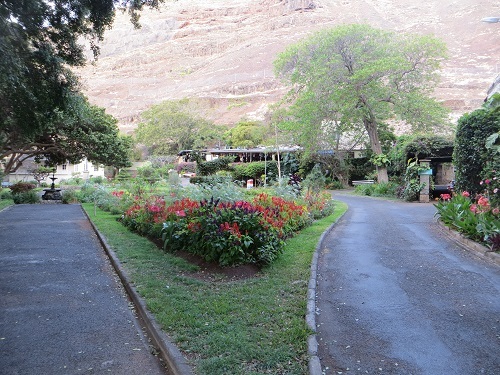 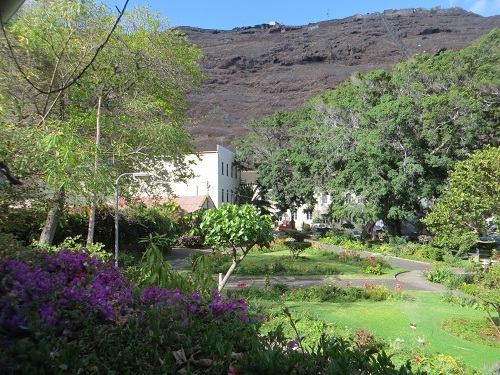 There are several places where you can eat, including the St. Helena Coffee Shop right by the moat, Anne's Place in the Castle Gardens, the Consulate and the Inkwell in Market Street. But be careful. Some of these places don't open on Mondays, Tuesdays and Wednesdays, unless a ship in port, and the cafés often close at 3.30 p.m. 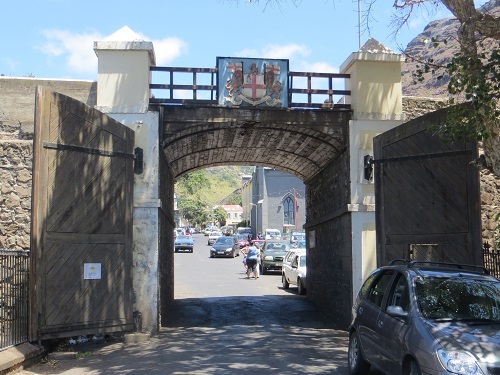 Our lazy day continues into the afternoon in the next blog. 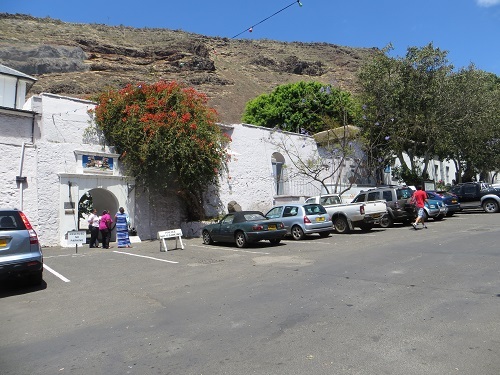 A spot of colour by the castle wall 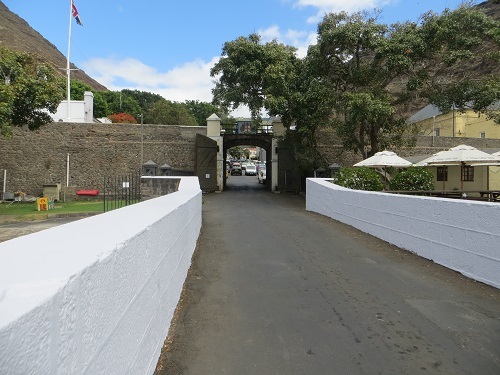 Bridge across moat to town walls 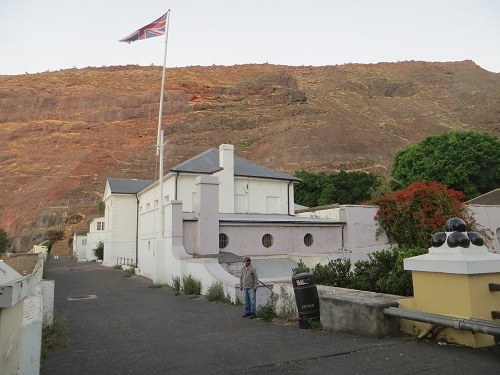 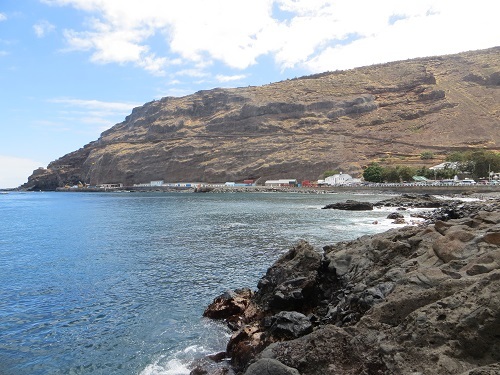