If you could see forever over Earth's curves as you gaze south from this most remote of islands, the next land to meet your eye across the blue swell of the vast South Atlantic would be Antarctica. But as you can't, let's continue our lazy day by turning back from the waterfront, crossing the bridge over the dry moat, and passing through the town gate again. 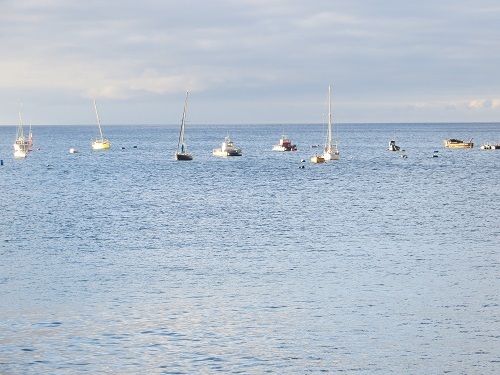 Gazing out from Jamestown waterfront 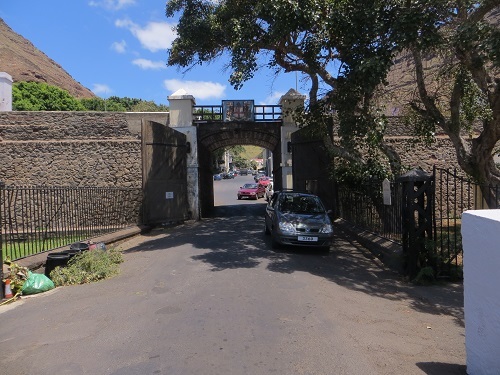 Back through the town gate
To your right down a side alley and opposite the public toilets you'll see an old cannon and the entrance to Jamestown's fascinating museum.

It is extremely informative on St. Helena's history, from its discovery over 500 years ago by Portuguese sailors and the subsequent centuries of skullduggery among European powers as the Brits, Dutch and Portuguese sank each other's ships to latter-day island lifestyle. 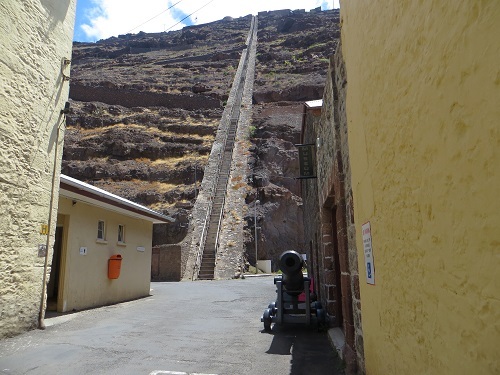 Thus on the ground floor you can gaze at guns, uniforms, wooden crates that carted Napoleon's belongings along with him to exile here, and an array of objects rescued from sunken vessels, while on the first floor you can wonder at more mundane exotica such as a dentist's chair with a foot-driven drill and an old bath tub with five silver taps and a shower.

A more gruesome exhibit is a glass case on law and order with the nooses from the last island execution, in 1905, when the brothers Crowie were hanged for murdering a certain Mr. Gunnell in a robbery gone bad in his house atop a massive crag in Prosperous Bay overlooking the new airport runway. 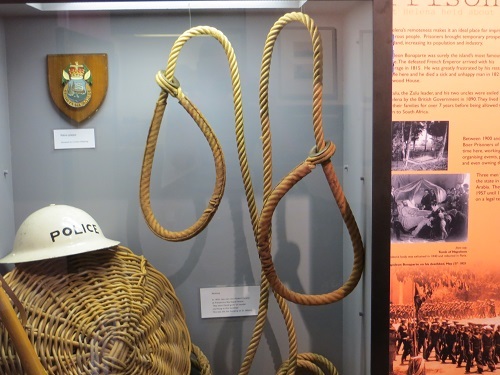 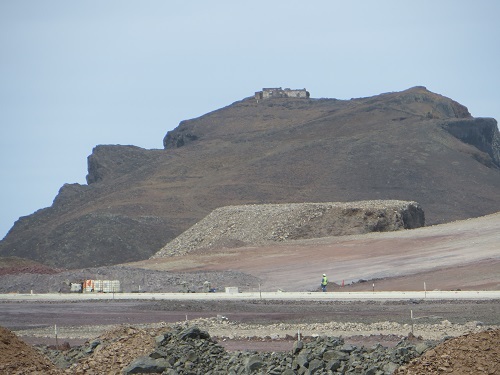 Crime scene in the house on top of the rock

Outside the museum, to your right, is the police station, next to it Her Majesty's Prison with its current treasure of 12 inmates, and adjoining it St. James Church, originally built in 1774. A steeple was added to its tower in the 19th century but this became unsafe and had to be removed in 1980. Plans are underway to restore it. 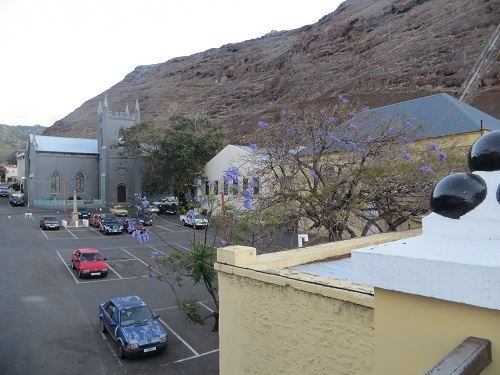 Within, the sunlight glints off golden memorial plates, including one to Saul Solomon, begetter of St. Helena's long-gone Jewish heritage. Napoleon may be the name most universally linked to St. Helena, but Solomon is the name you'll see on shops and awnings.

Years before Napoleon landed on these shores, Saul Solomon, still in his teens, set sail from England for India, became sick on board, and was dropped off in Jamestown to die, according to the generally accepted story. 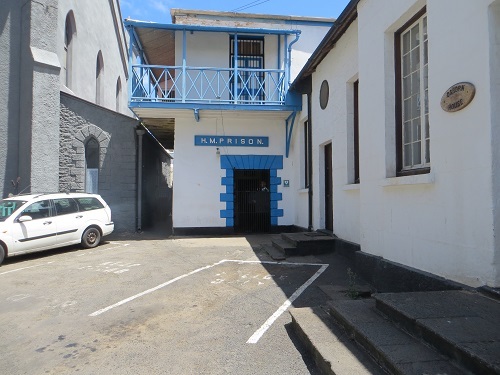 Nursed back to health by an army officer's family, he had already established himself as the island's 'merchant king' by the time the former French Emperor dropped by. By 1790 he already had a store and boarding house, charging the 'exorbitant' price of 30 shillings a night, according to local complaints.

Business soared and he brought over his brothers, Benjamin, Joseph, Lewis, and Charles to help run business on an island that at that time was visited by 1,000 ships a year. A Jewish community thus set up home here, but it did not last. Some emigrated to Cape Town, while those who remained assimilated into the Christian population, becoming church wardens and pillars of the establishment. 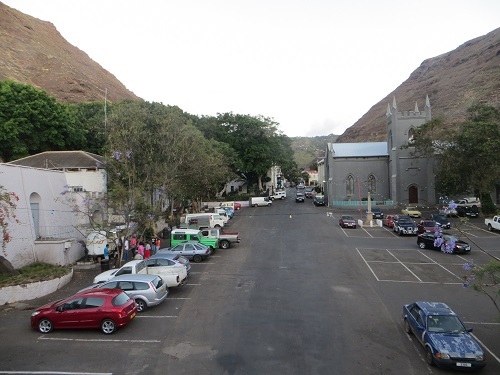 Another view of St. James

Saul branched out into other businesses, becoming an undertaker for both Anglicans and Catholics. He died on a visit to England in 1852 and his body was brought back here for burial.

In 1960 the last direct descendant here of the Solomon dynasty died, and in 1974 the St. Helena government nationalized all its companies. But the name still reigns on the streets of the island that Solomon and Co. so dominated for nearly 200 years. 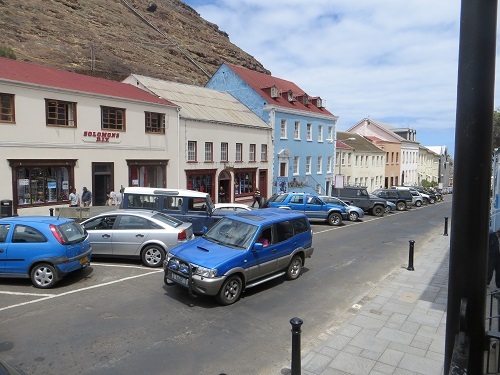 Solomon's name endures
Just behind the police station, the 699 steep steps of Jacob's Ladder climb precipitously up the cliffs - if not to heaven as their biblical predecessor, then at least to a heavenly view over Jamestown.

Rising at what looks like an 80 degree angle, but in fact is only half that, they taunt me. You must climb them, my inner Mother barks. Don't be a silly arsehole, my outer logic purrs seductively, you can get there by taxi along the switchback road for a mere pittance. So, as always, I compromise - and do just what inner Mummy commands. 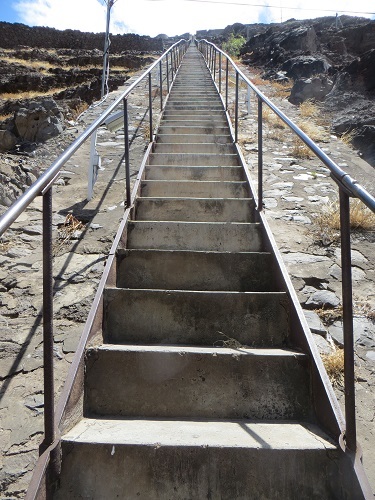 Who says this is to be a lazy day! A jaunty three steps turns into a mental Everest on the fourth as I struggle on, stopping every so many steps to breathe my last. Breath regained, I forge on - stop, start, stop, start. There's a sole climber ahead of me, ascending to the Pearly Gates, actually the crumbling walls of an old fort, stopping not even once as he disappears over the rim.

About half way up another climber, moving onto the Ladder from a cliff-side path, overtakes me and continues on heavenwards without a break, a heavy backpack hanging weightily from his shoulders to increase his mental, and physical for all I know, orgasm. 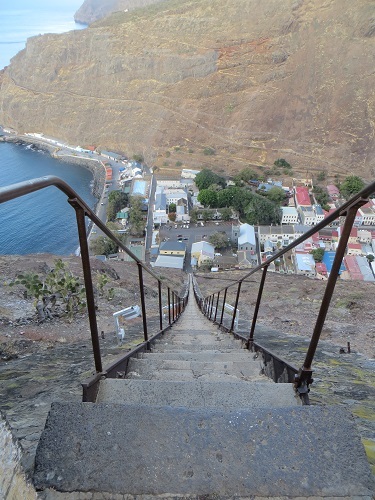 Looking back from top

'I do this every day,' quoths he. With such encouragement I take extra-long and more frequent breathers.

Majestic white birds glide round and past me, their beaks bright red, a spindly tail protruding a foot or more from their arses - rigid, then moving in the breeze. They must use it like a plane's tail flaps. They're called tropic birds, although the Saints call them trophy birds. 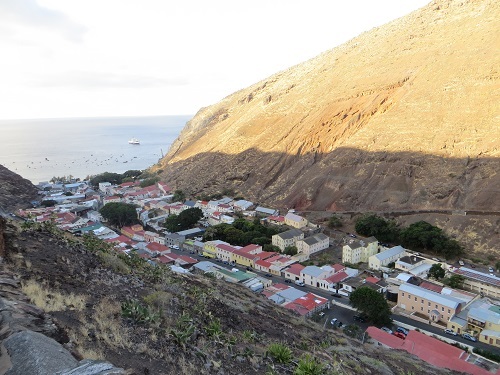 At last I reach heaven - or at least the ruined fort - and the entryway to Half Tree Hollow. The views over Jamestown, nestling in its ravine, and out to sea are superb. RMS St. Helena is in stately pose offshore, small boats and yachts bobbing in the foreground. 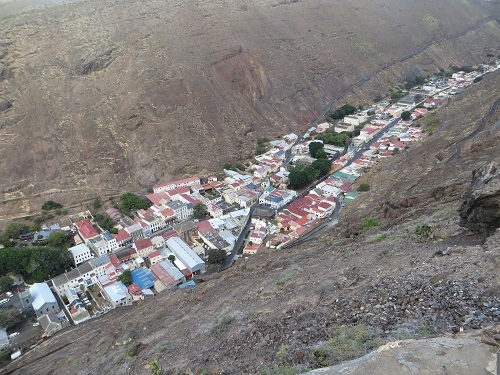 I'm not a tropic (or trophy) bird, I'm a chicken. I don't even risk a spill walking back down the steps, let alone sliding on the rails. I take the narrow switch-backing road back to town.

In the next blog - Jamestown by night 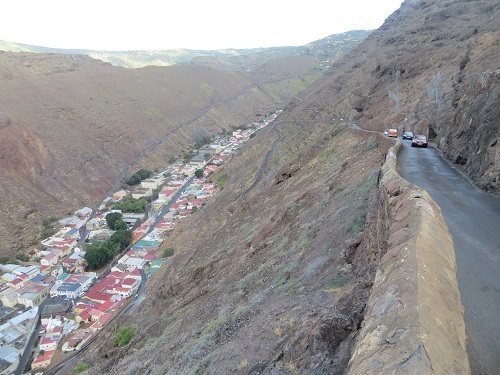 The road going down