There are still two hours left for this 'lazy' day before evening sets in and Jamestown's wild nightlife begins, so there's time for a little local hike along the rugged cliff face.

Go up Main Street, bear left where it branches into Napoleon Street, go past Moon Beam's gift shop, turn left into the lane by the Bahai'I Information Centre, and you'll find the path that leads along the rock face to Rupert's Bay. You can't miss it, I'm told. 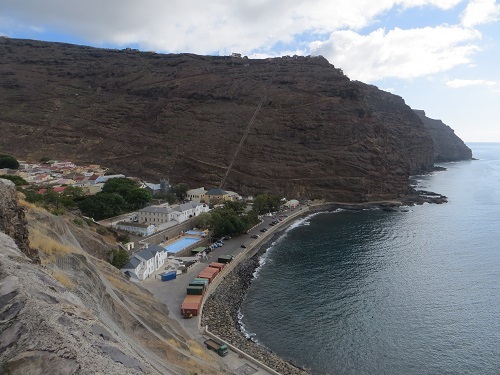 View over Jamestown from trail to Rupert's Bay

And funnily enough, for once in my life I can't miss it. Just where my addled bump of direction might opt for the wrong track, there's a clear signpost: Rupert's Bay via Munden's Battery. 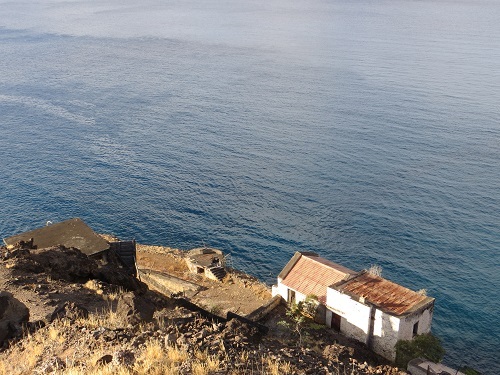 Munden's Battery consists of a series of centuries-old heavy cannon emplacements in the cliffs, both close to shore and up in the rocky heights, to protect Jamestown from unwelcome visitors. 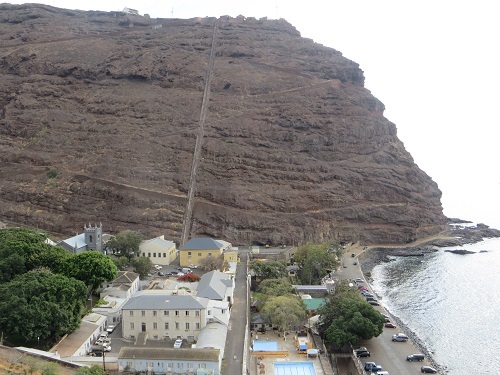 view across to Jacob's Ladder

The trail climbs but is much easier than Jacob's Ladder, threading its way between a low wall and the sheer rock face with its thick wire netting - very ugly but necessary to save lives from the periodic crash of boulders tumbling down the precipices and killing people. 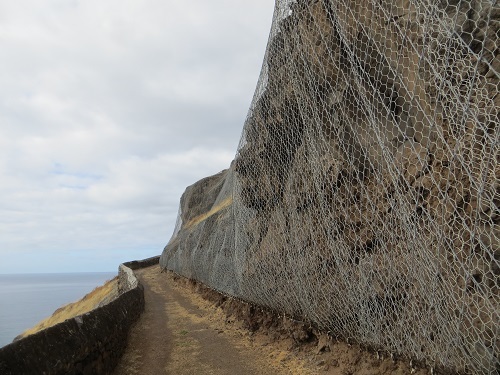 Fold after fold of almost vertical cliff faces plunge down to the blue Atlantic beyond Jamestown, nestling in its ravine. 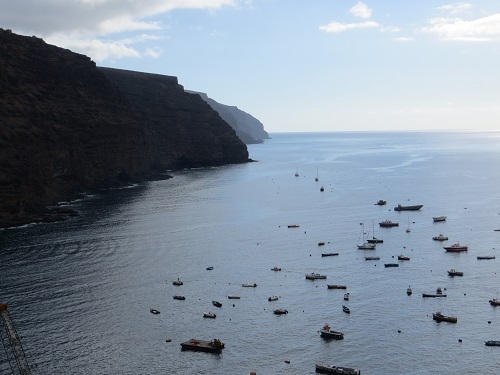 Fold after fold of cliffs

A sharp right turn reveals the equally precipitous cliffs of Rupert's Bay. Beyond, the stark black mass of St. Helena's Sugar Loaf looms up, a huge square hump like a lump of sugar crowing its summit. 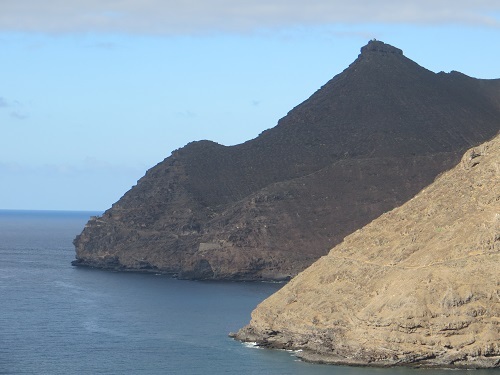 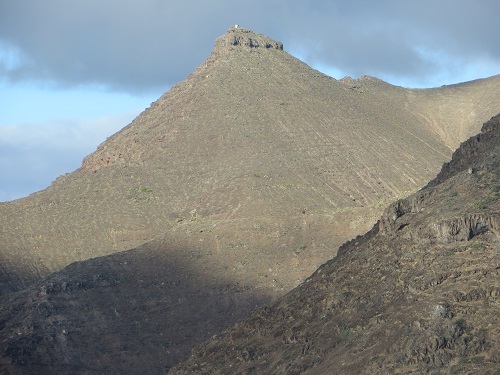 The trail continues past a red warning sign: Road closed. Well this is no road, so I keep buggering on as white, red-beaked tropic (trophy) birds swoop, soar and circle with their long spindle-like tails rigid. There are a couple of rather scary narrow ledges, but all in all a great walk. 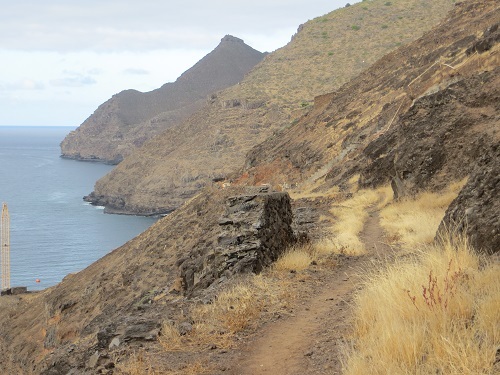 Back in town there's the little question of what to do now that night has fallen. First there's dinner. There are a few establishments where you can get food but you are advised to book beforehand. 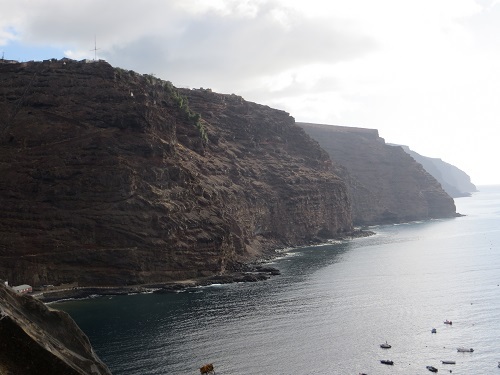 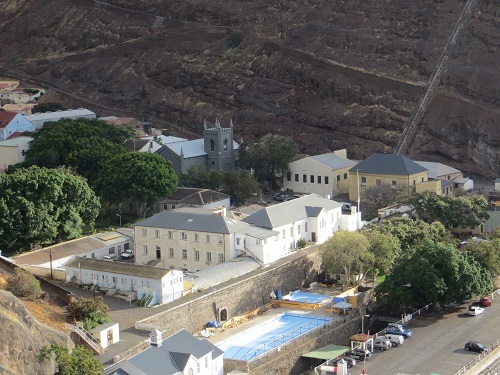 I've decided to book in at the inn where I'm staying, Harris's Guest House right at the start of Main Street, where hostess Irene is serving the island's famed fish cakes. There are two other guests, septuagenarian Germans who have lived in South Africa for over 50 years.

'Ach ya, I must run to the toilet,' quoths Peter right in the middle of a fish cake, disappearing post haste up the stairs.

Thank you very much for that, Tina. There's such a thing as too much information, you know. I decline the glass of juice proffered by Irene. 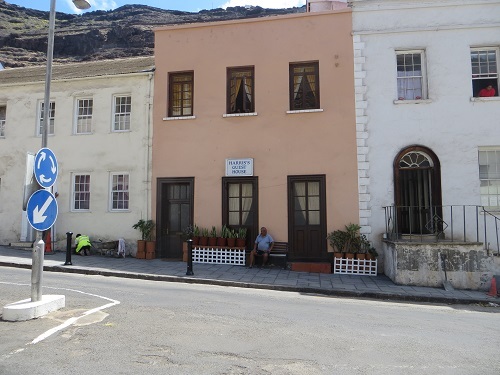 Dinner navigated, there are various island items for Jamestown's 890-odd inhabitants such as bingo night. Then there are the pubs. In Market Square near the clock tower, The Standard and The White Horse shine out their rough welcome. 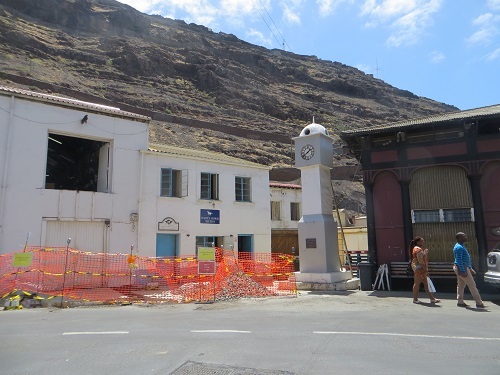 The Standard has a particularly interesting item. Everybody on St. Helena has a nickname although you apparently don't always use it to their faces, and some of them may actually pretend to be ignorant of their street sobriquets. But a couple of photo montages on The Standard's wall reveal the dirty little secrets, pictures with nicknames - but no real names. 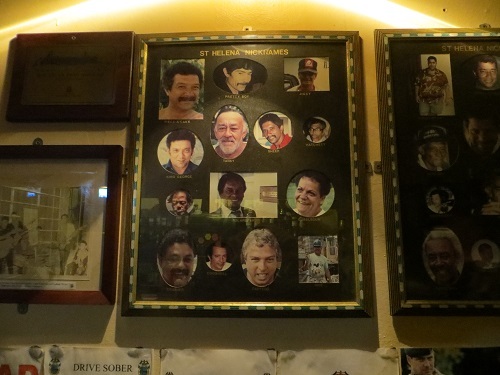 Nickname hall of fame
Holding pride of place is FartEgg, recently deceased. Nobody knows the exact circumstances of his christening, though the general consensus is that he must have earned it from some particularly egregious breaking of wind. Besides, he really does look like a fart egg with a wide creepy grin, though Fish Cake and Piece-A-Cake don't look too bad. 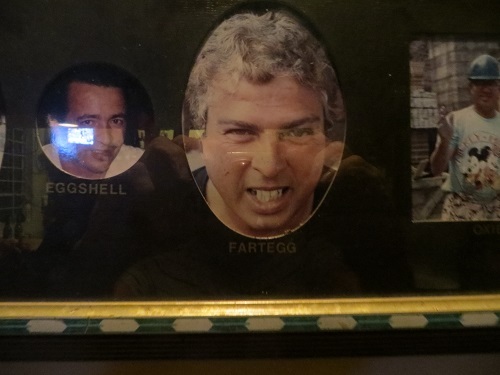 With others like Dicky Eye the connection is easy - the thus baptized gent has one eye smaller than the other.

The trouble with the pubs, a couple of current visitors say, is that everybody buys everybody else a round in fairly smart succession. If there are a dozen or so people, you end up rolling out oblivious to and of everything. Matt, the UK policeman on loan, says weekend inebriation can be a particular problem. 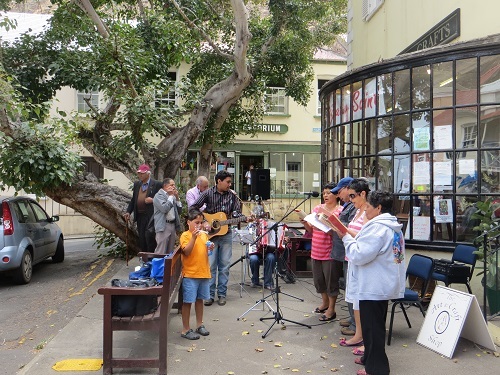 There are two open air pubs outside the town walls right on the waterfront. Donny's tends to fill up with expats who gather here for Friday evening's sundowner as the golden orb sinks into the darkening blue ocean. Locals tend to find them snooty. After dark, the coloured fairy lights are a-twinkle, but the expats are still a-snooting.

Across the narrow street from the town gate is Dillon's, also known as the Mule Yard. Here locals gather in a much more convivial atmosphere with many a raucous guffaw issuing forth as they look at a large video screen of singers and dancers accompanying whatever music is blasting over the loudspeakers. 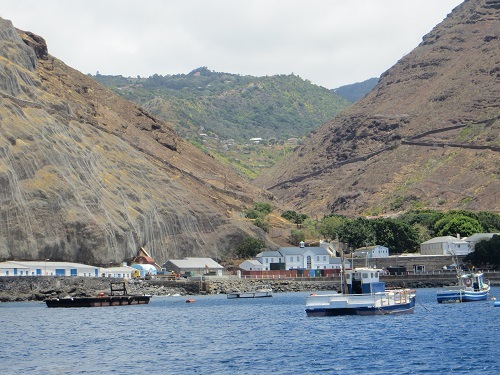 At 11 P.M. on this particular night, Irene comes down to the front. Her son, Daryl, is due back from three days of fishing out to sea. His blue boat, the John Mellis, heaves into sight.

They didn't go to their regular Bonaparte fishing ground but to one called Merchant, their first time there. He and his two companions have caught 150 tuna, miraculously just three fish short of Jesus's miracle - 3.5 tons of fish now weighing on the wharf. Irene breaks open a bottle of champagne and they celebrate.

'You know,' quoths a bystander, 'the biggest one got away.' It's the same with fishermen the whole world over. 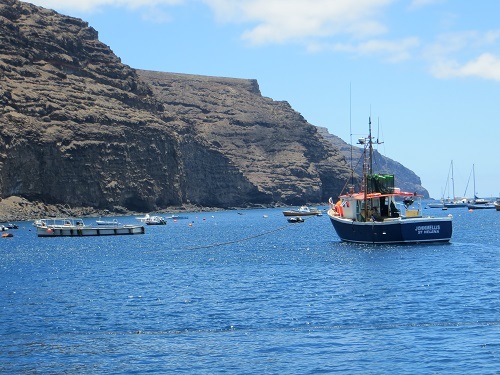