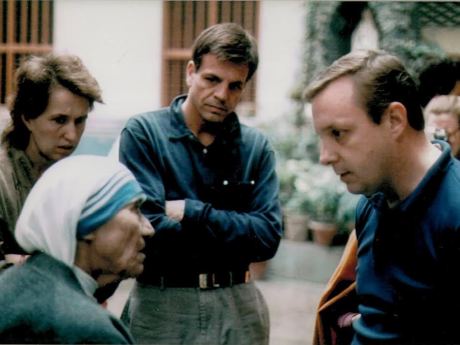 She touched my arm and nodded for me to follow one of her workers at Kalighat, her home for the dying destitute in Calcutta.

The man spoke no English and led me to a door. I walked with him into the dimly lit room to find a score of shrouded bodies on the wooden shelves. Without a word he reached over and grasped the shoulders of one of the deceased and as he slid the body off the shelf he motioned for me to grab the feet. We carried the body across the hall to a waiting transport van at the curb. Then we took another body from the van back to the morgue. My congressional colleague watched this exchange with amazement.

As I thought about what I had just done I was sure this would be the most memorable day in my congressional career.

This journey started when my colleague, congressman Mike Synar of Oklahoma, invited me to join him on a congressional visit to South Asia. Mike told me from the start we would not be sitting poolside at a four-star hotel -- we would be visiting some of the poorest places on Earth. He promised I would never forget the trip and that I would come home with a different view of the world.

We visited Kathmandu in Nepal with its massive Buddhist prayer wheels and at the time a ruling King. We trekked at high altitude into a mountain village with no electricity or running water. The locals with a third eye painted on their foreheads stacked wreaths of flowers around our necks. Through translators they were anxious to know about a young American from Pittsburgh who as a Peace Corps volunteer had lived with them for two years. They were sure we would know him. He was the only American they had ever known.

We journeyed to Bangladesh, a country which often seemed to fall off of God's radar and languish in the misery of poverty and horrific natural disasters. We walked the crowded streets of Dhaka with future Nobel Peace Prize honoree, Muhammad Yunus, founder of Grameen Bank. We learned that a loan of ten dollars to a poor woman could buy a goat and save a family from starvation. I later led the effort in the Senate to give Dr. Yunus the congressional Gold Medal for his lifetime of dedicated service to the poor.

But it was a Catholic nun in Calcutta (now Kolkata), barely five foot tall, who gave us a day still fresh in my memory more than twenty years later.

We had scheduled visits with a long list of Indian government leaders but decided to add a stop at 6:00 am when we learned Mother Teresa and her nuns welcomed visitors to an early morning Mass at her chapel. Her fellow Missionaries of Charity filled the pews in their simple white habits with blue piping. The last row in the chapel was saved for visitors from around the world who like us wanted to meet this woman from Albania who had dedicated her life to the poorest souls on Earth.

After the Mass we were invited to have a cup of tea. We met Mother Teresa who welcomed us and talked about her busy day ahead. Mike Synar pulled me aside and said let's cancel our meetings today and volunteer to help her. I agreed and we asked Mother Teresa if she could use two American volunteers. She said of course and we followed her into Kalighat.

Kalighat was a hospice where the street people in their final days of life were gathered from the dark corners of Calcutta and brought to die with dignity. There were two long rooms, one for women and another for the men. They rested on simple cots as Mother's nuns and volunteers brought them water and food. There were no IV's running and the only medicine appeared to be aspirin. I remember a badly burned woman and emaciated men who stared into space. The rooms were silent aside from the whispers of those who were attending the dying. When I remarked about the quiet of these rooms, Mother Teresa told me that for many of these people this was the only moment in their lives when they were at peace and felt truly loved.

Our job at that day, thank goodness, was simple. It was laundry day and we found her nuns washing the sheets and bedding by hand in steaming tubs. Mike and I were assigned to carry the baskets of clean laundry up three flights of stairs to the clothes lines on the roof. Aside from that side trip to the morgue, I spent several hours lugging the baskets up and down the stairs. Mother Teresa told us California Governor Jerry Brown had volunteered for the same job several weeks before and after a few days of practice became very good at it.

Our next stop was her orphanage with a room full of wide-eyed toddlers hanging on to the bars on the cribs. Mother Teresa told us that she no longer turned to families around the world for placement. Indian families were now adopting these abandoned children and importantly were not concerned about the age-old caste differences.

I still remember the low roofs and building walls covered with drying cow dung pies used for fuel. They were lifted from the street and slapped on the walls to be retrieved later. They looked like giant peanut butter cookies, an image I have never forgotten to this day.

When we reached the refuge for lepers Mother Teresa led us from the truck. She was stopped several times by people who would fall to their knees to kiss her sandals. She tried to stop them but they would not be deterred.

The refuge was an abandoned railroad warehouse which Mother Teresa had commandeered for the poor. No right-thinking government bureaucrat would say no to her. Many of the leprosy victims were badly scarred and had lost fingers and limbs to the disease. She gave them the assignment of making the beautiful white habits for her nuns in return for food and shelter. The love they had for her was obvious in the words spoken and in their eyes. For Mother Teresa they were not outcasts.

Just last week thousands gathered in St. Peter's Square as Pope Francis formally announced that this simple woman who spent her life among the poorest of the poor was formally recognized as a saint by the Church.

One day, many years ago, on the streets of Calcutta I saw what one person could do when she humbled herself and dedicated her life to the "unloved, unwanted, uncared for."