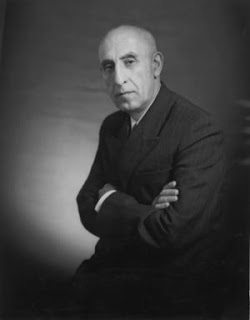 The Pope speaks of the "globalization of indifference" and Bernie Sanders who recently visited the Vatican talks about a "moral economy"and one political pundit recently reiterated the old saw that "the only mistake you can make in politics is to tell the truth." Geopolitical indifference and moral economics are like oil and water. They don't mix any better than realpolitik and moral economics. But "geopolitical indifference" and realpolitik make a perfect and delicious cocktail if you look at life as a game in which there are winning and losing teams and you're going to do everything in the book to make sure that your team wins. That's the kind of thinking that caused the United States to overthrow Mossadegh regime Iran and later Allende in Chile. The Cold War was still in full swing and the theory behind these two coup d'etats was that that the United States wanted to install friendly regimes that were not potentially aligned with the Soviet Block. The doctrine of "spheres of influence" was influential during this period when a socialist regime in a country like Chile was viewed as a potential Cuba. In its zeal to create allies the United States found itself on the wrong side of the fence, just as Israel does today, when it courts favor from conservative elements in the United States in its need to strengthen its own security. You purchase a certain amount of military capital at the expense of certain principles and ideals that end up having hemispheric repercussions. In the case of Israel the courting of the right (some of whom may tacitly or overtly support the Israeli settlers) runs the risk of undermining the prospects for a Two State solution. There are always consequences and the problem with the free market or laissez faire approach to international relations which depends on a mixture of indifference and the notion of duplicity as public policy (what competitor wants to tell his opponent the truth) are the costs that accrue. The Shah was a US client in much the same way that Assad is a client of the Russia's today. Our contentious relationship with Iran has been the casualty of the same kind of mentality that continues to seek greatness and pre-eminence over a more holistic view of foreign affairs.