Okay, there were too many negatives in that title. Let me say it more positively: We positively must extend UI benefits, lest 1.3 million UI recipients lose needed UI benefits in a job market that is improving, but still slack.

Here's the argument: The Senate and the House are working on a budget deal, and key Democrats, including the White House, are arguing that the deal should include another extension of UI benefits. Opponents say, "been there, done that." We've already extended benefits a bunch of times and now that the job market's getting stronger, we don't need to do so again.

Not so. As I wrote this morning, "Policymakers must not conflate an improving labor market with a healed job market. Until job opportunities are more robust, the extension is needed, both for the sake of the long-term jobless and the macro-economy (since UI has a large multiplier)."

Take a gander at the figure below. It shows the share of the labor force that has been seeking work for at least six months, aka the long-term unemployed. More to the point, it shows what that share has been in past recoveries when Congress allowed the extended UI program to expire. The current share of long-term job seekers is twice what's it has been at this decision point in the past. 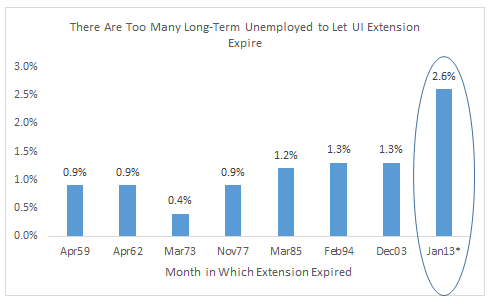 Source: CEA (link above), Table 1; *This is the November long-term share with the month that the extension would expire.

I'm well aware of the argument that if we keep extending UI benefits, people will choose to take UI over a job, and that's by no means a crazy argument. But the question really is this: Are there enough jobs out there? Is this a demand-side problem, suggesting the need for another extension, or a supply-side problem, suggesting UI recipients are gaming the system?

The research, reviewed recently by both my CBPP colleague Chad Stone and by the White House Council of Economic Advisers, as well as the figure above, suggests it's demand, not supply. That is, this work finds that past UI extensions have only slightly boosted that amount of time that people voluntarily spend out of work.

The reason is that Congress has supported those extensions only in slack job markets, where the number of jobseekers solidly outpaces the number of job slots. That matchup is improving, but the jobs gap is far from closed.

I speak from experience when I tell that one mistake policymakers have consistently made since the Great Recession has been to end stimulus/safety net/counter-cyclical measures too soon. We have seen economic "green shoots" through rose-colored glasses and acted precipitously in response, cutting out fiscal support before the private sector was humming along on its own. I'm first in line to stress that it would be a mistake to waste valuable resources on a UI extension that we, or more precisely, the long-term unemployed, don't really need. But that's not what happening here and now.