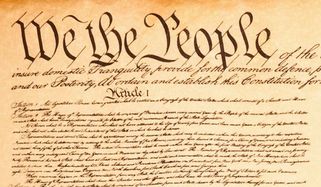 "Just a Spoonful of Socialism Makes the Capitalism Go Up"

"Just a spoonful of socialism makes capitalism work." That should be the essence of Sen. Bernie Sanders' response to the inevitable question he will be asked at the first Democratic presidential debate in Las Vegas on Tuesday night, about how he, as a self-proclaimed socialist, thinks he could be elected president of this oh-so-capitalist nation.

Beyond that, a program based on a similar argument -- under an accurate name that makes it both understandable and attractive to American voters -- is what the eventual Democratic presidential nominee, whoever she or he may be, and Democrats running for Congress should unite around. If they do, they can turn 2016 into the year of a transformative election.

The Stars Are Aligning for a Progressive Wave

The stars appear to be aligning for a major swing in American economic, social and political attitudes in the direction of progressive Democrats. Republicans are fractured into warring factions and the party's base is so far to the extreme right that, in order to have any chance of winning primaries, GOP hopefuls have to identify themselves with a host of positions that are anathema to mainstream Americans. On issue after issue -- from climate change to college affordability, from unlimited political spending to same-sex marriage, from curbing corporate greed to background checks for gun purchases -- solid majorities of Americans agree with progressive positions on economic and social questions.

The concentration of income and wealth among a tiny fraction of Americans and the concomitant decline of the middle class and impoverishment of the working class is the issue of our times. Republicans have zero credibility on this paramount problem, while progressive Democrats are lined up with most Americans on it. That's why so many people are being attracted to the candidacy Sen. Sanders, who has been forthrightly telling it like it is on this matter. 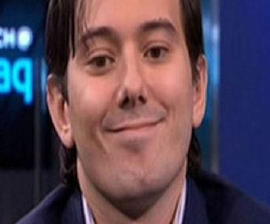 In just the past few weeks, Pope Francis lectured Congress on the moral imperatives to curb the excesses inherent in an unregulated free market, fight climate change, and develop an approach to immigration that reflects American values; hedge-fund manager Martin Shkreli stepped forward as the poster boy "the-public-be-damned"/"Greed Is Good" face of Greed Incarnate by raising the price of a medication by more than 5000 percent; and Volkswagen demonstrated in dramatic fashion the need for public oversight of corporate activities.

The major impediment that must be removed before progressive Democrats can make the most of this moment of opportunity to move the United States in a much-needed direction is their notorious ineptness at packaging and marketing their popular positions in a way that attracts the clear majority of Americans that agree with them. 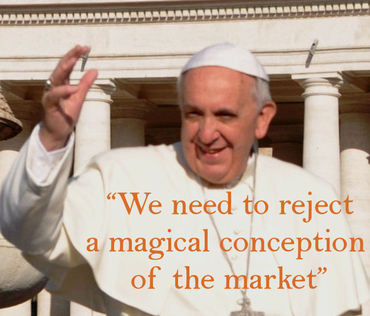 An appropriate name for the progressive Democratic program could be "Franciscan Economics." In his speech to Congress, Pope Francis warned of the dangers of ideological and economic fundamentalism. In his May encyclical, Laudato Sí, he had indicated that "a deified market" is the sort of fundamentalism that is the source of many of our problems. He condemned "the mindset of those who say: Let us allow the invisible forces of the market to regulate the economy, and consider their impact on society and nature as collateral damage." Francis's encyclical is a full frontal verbal assault on the Market-Is-God faith to which so many Republicans blindly adhere, without regard to its repeated failures.

An Economic Plan Rooted in the Constitution

Having this popular pope forcefully preaching most of the same things they are is very beneficial for progressive Democrats, but the best way to describe and name the approach around which Democrats should rally is to use a patriotic American terminology. It would be wholly accurate to call it "An Economic Policy Inspired by the Founding Fathers" or, simply, "Constitutional Economics."

Most Americans know from experience that capitalism is wonderful at stimulating production and innovation, but also that it can easily lead to highly undesirable results when left unregulated.

The model for the economic approach that we need in order to obtain the undeniable benefits of a market-based system while limiting its harmful excesses is to be found in our political system. 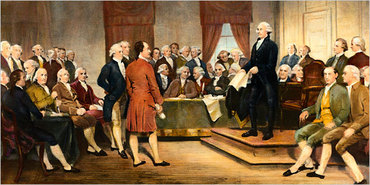 Though they did not put it in quite the same way, the American Founders understood the benefits and inherent dangers of democracy in much the same way as Winston Churchill later did when he said in 1947: "No one pretends that democracy is perfect or all-wise. Indeed, it has been said that democracy is the worst form of government -- except all the others that have been tried."

While most of the men who negotiated the United States Constitution believed that democracy is the "least bad" political system, they were very mindful of its inherent flaws. Accordingly, they devised a system based on democracy, but with a variety of checks and balances to rein in its tendencies to produce dangerous excesses.

Capitalism with Checks and Balances

Democrats today should forcefully make the case that we need to apply to our economic system the wisdom the Founders employed in establishing the American political system. Contrary to what most Republicans tell us, no one should pretend that unrestrained capitalism is perfect or all-wise. Among economic systems that have been tried, capitalism is the "least-bad," so it is essential that we have a basically capitalist system. But it is essential that we follow the model provided by the Founding Fathers in our political system and utilize a set of economic checks and balances that will enable us to enjoy the abundance of the market without seeing it concentrated in the hands and financial accounts of a miniscule fraction of our people while the middle class slowly vanishes.

A measured dose of "socialism" is the way to restore capitalism to good health. That's a prescription for what ails the body economic in 2015 that parallels the one written for the body politic by those revered patriots who met in Philadelphia in 1787.

What could be more American? 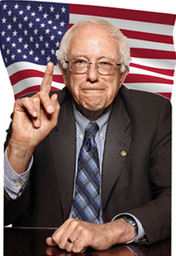