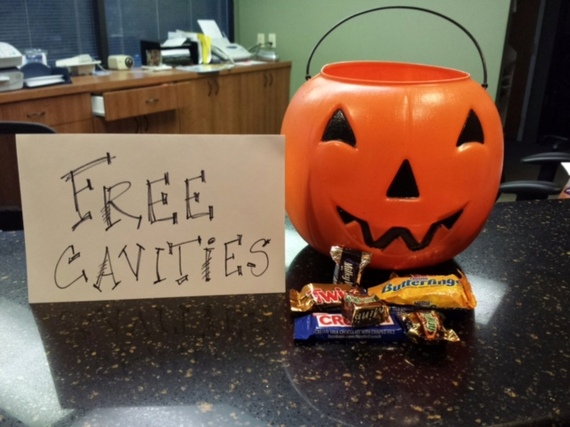 You'll find my favorite Halloween decoration at the front desk of my dental practice: a bowl of candy labeled "free cavities." (Yes, I know, dentists are hilarious!)

This weekend, children will dress up as their favorite characters and run around the neighborhood in the hopes of scoring the most delicious candy they can! They'll also try and avoid those curmudgeons who have the audacity to give away apples and toothbrushes.

In a perfect world, children would only trick-or-treat at those homes giving away the least cariogenic (cavity-causing) treats -- but this isn't a perfect world, and your kid loves Laffy Taffy. There's not too much you can do about that... at least not before this weekend. Nor is there much you can do to fight the multibillion dollar Candy Industrial Complex, which predicts $2.5 billion in candy sales for Halloween 2016.

However, by thinking like a dentist, you might be able to fight back against those pesky cavity-causing bacteria. So here's a brief guide to help you do just that! For each candy, I've described both the treat (its potential "health benefits") and the trick (what it is really going to do to your teeth). I've also given it a cavity rating on a scale of one to five: the more orange teeth you see, the trickier the treat! 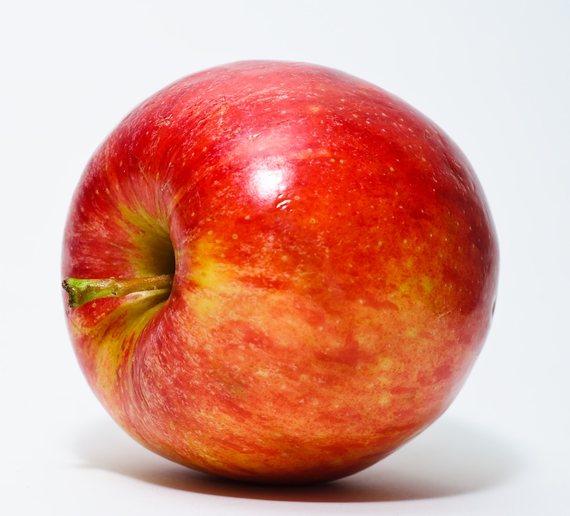 Treat: Apples, both red and green, have some of the highest antioxidant capacity of any food you can eat.

Trick: C'mon! This is just a mean joke to play on a trick-or-treater! Besides, fruits are packed with sugars, and can be slightly acidic -- neither of which is great for your dental health. Stick to vegetables instead. 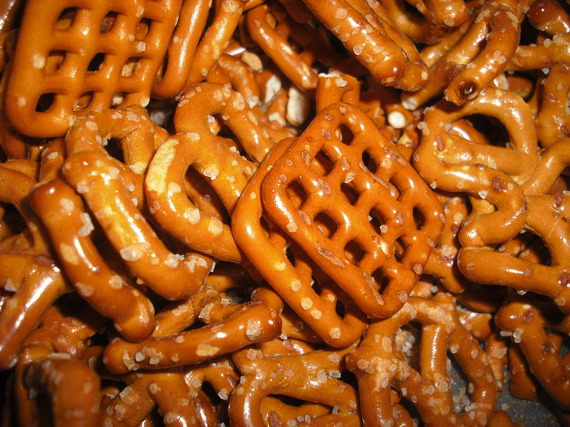 Treat: A somewhat healthier alternative to candies, pretzels can also be a source of calcium -- which is good for your teeth -- and fiber.

Trick: Fermentable carbohydrates like pretzels can get forced into the grooves of your teeth, which would then allow them to serve as a food source for bacteria. Plus, the crunchier a pretzel, the more likely it is to break a tooth.

"Candy-Peanut-MMs-Wrapper-Small" by Source. Licensed under Fair use via Wikipedia

Treat: Nuts have a natural abrasiveness that can help clean your teeth while you eat. And all of that chewing will produce more saliva, which will help to neutralize cavity-causing bacteria. Nuts can also be a good source of calcium and vitamin D.

Trick: Like pretzels, nuts can be pretty crunchy, so breaking a tooth is a risk. Also, the nuts are covered in milk chocolate--more on that below. 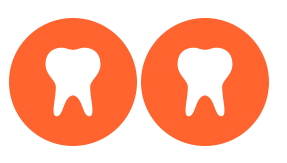 "Hersheybar" by Source. Licensed under Fair use via Wikipedia

Trick: Milk and white chocolate have sugar added to them, which ends up counteracting the CBH benefits. When it comes to chocolate, it's best to stick with the darkest and least-processed.

"Candy-Mounds-Wrapper-Small" by Source. Licensed under Fair use via Wikipedia

Treat: Studies have shown the benefits of coconut oil on oral health. Oil pulling -- the ancient practice of swishing around oils inside the mouth -- has been shown to reduce dental plaque, which can lead to decreased cavities and gingivitis.

Trick: If you want to see any benefits from oil pulling, you'll need to do it for at least 10-20 minutes a session.

"Starburst Logo" by Source. Licensed under Fair use via Wikipedia

Treat: Delicious! Especially the red ones!

Trick: The stickier a candy is, the worse it is for your mouth. The sugar stays on your teeth longer, acting as a constant source of food for those cavity-causing bacteria. (For more information, read my 5 Things You Didn't Know About Cavities.)

It's hard to imagine a Halloween candy that doesn't have any sugar, so the benefits of individual ingredients are usually outweighed by that. However, with regular brushing and flossing, twice-yearly dental exams, and just a pinch of common sense, you should be able to enjoy these treats in moderation without making your dentist turn on her drill!

Oh, and in case you're wondering: what does a dentist give out on Halloween? Full size candy bars, of course ... with a toothbrush!

And a business card.