What should governments do to achieve the SDGs?

Addressing tobacco is a proven approach, with built-in revenue. Let me explain.

In 2015, the world agreed to a new blueprint for development. The United Nations adopted the Sustainable Development Goals (SDGs) as the guide to improving the lives of the world's people, and the Earth itself, from 2016 to 2030. The SDGs replace the Millennium Development Goals which were expiring after making major strides in the fight against global poverty. Despite criticisms of the updated goals, the SDGs are a major accomplishment.

Now the hard work of translating words into action, and ultimately progress, has begun. A first step is for governments to establish priorities. The SDGs contain 17 Goals and 169 targets, making it difficult for every government to give equal weight to each of them.

There are some development targets that most governments can achieve, particularly by addressing the non-communicable diseases (NCDs) epidemic. The term NCDs may not be well known, but be prepared to hear about NCDs more and more in global discussions. NCDs - sometimes called chronic diseases - include the following devastating killers: diabetes, cardiovascular disease, cancer and chronic lung disease, which combined kill 38 million people each year. It was long thought that NCDs were 'lifestyle' diseases of people living in high-income countries. That is no longer the case: 28 million of these deaths occur in low income countries every year.

The fact that nearly three quarters of global NCD deaths happen in low- and middle-income countries, makes NCDs a major cause of poverty and an urgent development issue. Globally, the impact of NCDs will increase 17% in the next 10 years, 27% in Africa. Low-income countries, many of which are still grappling with heavy burdens of infectious disease, risk being overwhelmed by this wave of largely preventable obstacles to development.

One risk factor is common to the NCDs listed above: tobacco use. Tobacco use kills more than six million people every year, the majority of them in their most productive years (aged 30-69). And like NCDs generally, tobacco use is a major driver of poverty, depriving the world of between 1-2% of its GDP annually. In the 20th century, 100 million people were victims of tobacco use: in this century, it will kill one billion people, unless trends change.

Fortunately, we know the steps to take to fight the tobacco epidemic and to prove that dire forecast wrong. They're contained in the World Health Organization Framework Convention on Tobacco Control (FCTC). The FCTC was adopted in 2005 and today has 180 Parties, which represent almost 90% of the world's population. WHO has described FCTC measures as a 'best buy' in fighting NCDs. WHO Director-General Margaret Chan stated during an address at the United Nations General Assembly in 2011 that fully implementing the FCTC "would bring the single biggest blow to heart disease, cancer, diabetes and respiratory disease".

That message was heard, and both NCDs and FCTC implementation are included in the SDGs. SDG 3 (the 'health goal') aspires to: Ensure healthy lives and promote well-being for all at all ages. Target 3.4 of SDG 3 is: by 2030 reduce by one-third pre-mature mortality from non-communicable diseases (NCDs) through prevention and treatment, and promote mental health and wellbeing. And target 3.a is: strengthen implementation of the Framework Convention on Tobacco Control in all countries as appropriate. 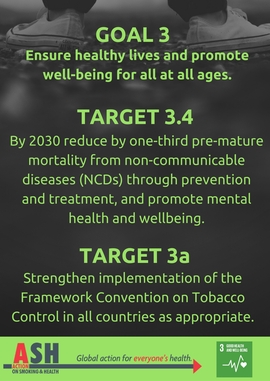 A WHO report released in 2011 found that tobacco control efforts can be implemented in low- and middle-income countries for a cost of just US$0.11 per person per year. Even that low number is an overestimate after taking into account the revenue-generating potential of one of the FCTC's measures: tobacco taxation. It is estimated that governments already collect nearly US$402 billion dollars in tobacco excise tax revenues each year. Yet many countries, and particularly some low-income countries, lag behind when it comes to implementing the FCTC and maximizing tobacco tax revenues.

There is ample room for governments around the world to raise tobacco taxes and generate revenue that could finance development as well as tobacco control measures. Most importantly, raising tobacco taxes is known to be one of the most effective ways to cut tobacco consumption. In South Africa, total taxes on cigarettes rose from 32% to 52% of the retail price between 1993 and 2009. This contributed to halving tobacco consumption from about four cigarettes per adult per day to two cigarettes per day over a decade, and generated a nine-fold increase in government tobacco tax revenues.

"Among the revenue proposals I have examined, tobacco taxes are especially attractive because they encourage smokers to quit and discourage people from starting to smoke, as well as generate significant revenues. It's a win-win for global health."

According to WHO, raising cigarette excise taxes by 1 international dollar per pack in all countries would lead to a 42% increase in the average retail price of cigarettes (by 63% in low-income countries and by 25% in high-income countries) and would lead to a decrease in daily smoking that could result in 66 million fewer smokers globally and prevent 15 million deaths. Furthermore, this would generate an additional 190 billion international dollars in revenue through cigarette excise taxes. This extra revenue can help create the fiscal space needed by countries around the world to finance development priorities. For example, if all of the extra revenue from raising cigarette excise taxes was allocated to government health budgets, then the public expenditure on health could increase by 4% globally.

The world's governments recognized this when they endorsed tobacco taxation as a potential revenue source to finance development activities at the Financing for Development conference in Addis Ababa in July 2015. Governments, through this United Nations process, formally recommended that all governments raise taxes on tobacco products as a way to fund their life-enhancing development initiatives and more specifically their efforts to meet the UN development goals.

In addition, governments used the WHO FCTC process to developed guidelines designed to assist governments in their efforts to raise tobacco taxes and to make them more effective. The latest round of FCTC negotiations adopted a set of Guidelines for implementation of the FCTC Article that addresses tax and price measures to reduce tobacco use (Article 6). The Guidelines are documents negotiated between all the Parties to the FCTC, creating a consensus on how to best implement a particular article of the FCTC. Through the adoption of the Article 6 Guidelines in November 2014, countries agreed on a very important concept: every country should have a long-term tobacco tax policy, including target tax rates tied to specific health objectives. The Guidelines recommend that:

"Parties should establish coherent long-term policies on their tobacco taxation structure and monitor on a regular basis including targets for their tax rates, in order to achieve their public health and fiscal objectives within a certain period of time. Tax rates should be monitored, increased or adjusted on a regular basis, potentially annually, taking into account inflation and income growth developments in order to reduce consumption of tobacco products."

Comprehensive tobacco control programmes and increases in tobacco taxes will help countries around the world achieve SDG 3 (Ensure healthy lives and promote well-being for all at all ages) and decrease the global NCD burden. In addition, fighting tobacco use would advance progress on many other goals in the SDGs, including Goal 1: end poverty in all its forms everywhere; Goal 2: end hunger, promote sustainable agriculture; Goal 8: promote economic growth; and Goal 13: combat climate change.

In 2017, the high-level political forum on sustainable development will be convened under the auspices of the UN Economic and Social Council, and Goal 3 is one of the 7 goals that will be reviewed in depth, meaning that special attention will be given to the tobacco target and the tobacco indicators included under SDG3.

So what are we waiting for?

NCDs and tobacco use are an enormous barrier to development worldwide; a barrier that threatens to overwhelm and drain government resources. One billion lives hang in the balance this century because of tobacco alone.

World leaders have signalled that taking action is essential to attaining sustainable development by 2030. All countries must seize this opportunity and invest in one of the 'best buys' to reach development objectives: strengthen tobacco control and raise taxes on tobacco products. It will pay dividends in the health of our citizens and in accelerating development overall. The tobacco related epidemic is a development challenge the world can overcome in the next 15 years.