In 1962 the world was poised for nuclear war. A standoff over Soviet missiles in Cuba threatened the tenuous peace between the U.S. and the U.S.S.R. and for thirteen days the world held its breath while the news media went wild with the drama of the brave young American president standing tall and facing down the evil Soviet Union. According to the headlines at the time, the Russians blinked at the last minute and withdrew the missiles. The Americans won the day, John Wayne style.

But that was a lie.

In fact, as the world learned 16 years later, the standoff was resolved by back door diplomacy, a deal that President Kennedy's brother, Attorney General Robert Kennedy, worked out with the Soviets. In frantic last minute negotiations, the U.S. offered to withdraw its missiles from Turkey if the Soviets would withdraw their missiles from Cuba. Unfortunately, the Kennedys wanted to keep the deal secret and the Russians went along with them. The result was that most Americans, including Vice President Lyndon Johnson, came away believing that the best foreign policy is to play tough and risk everything--even nuclear war--to prevail.

Some in Washington today still think that is the best game plan and they are pushing hard against President Obama's efforts to play only a limited role in Syria, even as President Vladimir Putin of Russia launches a bombing campaign to help President Bashar al-Assad stay in power.

Obama is right to be wary of deeper involvement in Syria, even as he is watchful.

"Mr. Putin had to go into Syria not out of strength but out of weakness because his client, Mr. Assad, was crumbling," Obama said.

It is hard to understand the eagerness of those who want the U.S. to rush into Syria when that policy didn't work in Iraq. Or Libya. Or any other area of the world where we have used our military might and/or covert agents in an attempt to impose order and American-style democracy. While we have been wildly successful in giving money and armaments to countries--especially in the Middle East--that we wanted to influence, we have not been so successful in winning hearts and minds.

Ironically, with his entry into the Syrian maelstrom, Vladimir Putin could soon run into the same problem.

According to New York Times columnist Thomas L. Friedman, Putin is now "up a tree" because he "stupidly went into Syria looking for a cheap sugar high to show his people that Russia is still a world power." Friedman says Obama and John Kerry "should just leave him up there for a month--him and Assad, fighting ISIS alone--and watch him become public enemy no. 1 in the Sunni Muslim world."

That could happen, Friedman said, because Assad is an Alawite, a branch of the Shia Islam. In siding with Assad, Putin sides with the Shia Muslims and risks alienating Sunnis, including Russian Muslims. The Sunnis are the majority sect in Syria and they dominate the Muslim world. Of the total global Muslim population of about 1.6 billion, an estimated 87 to 90 percent are Sunni, according to a 2009 study by the PEW Research Center. The other 10 to 13 percent are Shia. The report said that most Shia (68 to 80 percent) live in just four countries: Iran, Pakistan, India and Iraq.

Given Putin's support of Assad with the Russian bombing campaign, Friedman asks this question: "How long before every Sunni Muslim in the Middle East, not to mention every jihadist, has Putin's picture in a bull's eye on his cellphone?" In the end, Friedman says, Putin may be "more in need of a deal, or at least a lasting cease-fire, that stops the refugee slow."

According to Friedman, "the only way Putin can get down from that tree is with our help in forging a political solution in Syria."

In other words, the best way forward is for the U.S. and Russia to use diplomacy to end the war.

Pope Francis put it this way in a recent address: "It is not confrontation that offers hope to resolve problems, but rather the ability to meet and dialogue."

In an October 23 opinion article in the New York Times, former President Jimmy Carter also made the case for a peaceful political solution. Carter said the recent Russian airstrikes in support of the Assad government have helped "clarify the choice between a political process in which the Assad regime plays a role and more war."

To end the crisis, Carter recommends a five-nation plan backed by the U.S. and Russia and joined by Iran, Turkey and Saudi Arabia. The involvement of Russia and Iran is essential to a solution, Carter said, because Assad "will not end the war by accepting concessions imposed by the West, but is likely to do so if urged by his allies."

Meantime, American support for Syrian rebels and Russian support for Assad has created a veritable proxy war in the region. The skies over Syria are now crowded with warplanes from both sides. A spark could set off a wider conflict.

While President Obama has sought to limit American involvement in Syria, the hawks want action. This is apparent in presidential campaign rhetoric in which many candidates typically argue that the U.S. would be safer if Obama was tougher. Marco Rubio, the Florida senator running for the GOP nomination, said in a recent NPR interview that Obama and his policies in Syria and elsewhere have "strengthened Putin's hand."

In an August 2015 speech in Simi Valley, California, Jeb Bush attacked President Obama and Secretary of State Hillary Clinton, a leading candidate for the Democratic presidential nomination, for the "premature withdrawal" of American troops from Iraq. "That premature withdrawal was the fatal error, creating the void that ISIS moved in to fill," Bush said. He failed to mention that his brother, President George W. Bush, ordered the shortsighted U.S. invasion of Iraq that created that void.

Carly Fiorina, the former HP executive also in the GOP race, said in the CNN debate that she would not talk to Putin at all because "the only way he will stop is to sense strength and resolve on the other side." So not talking to Putin makes us safer? Really?

The Republicans are not the only hawks in town.

In September, Democratic candidate Clinton made a foreign policy speech at the Brookings Institution. According to the Huffington Post report, Clinton addressed several areas "in which she thought Obama had been too hesitant to use military might to exert American influence abroad." Clinton said Obama's failure to bomb Assad in 2013 for his use of chemical weapons "cost us."

While Clinton, Fiorina, Bush and Rubio are jockeying to show how tough they are and how much better than Obama they would be in the Oval Office, two candidates on opposite ends of the political spectrum are pointing out the dangers of intervention and the unintended consequences of American militarism.

On the right is Rand Paul, the Republican senator from Kentucky with deep roots in the libertarian camp. On the left is Bernie Sanders, the Independent senator from Vermont and an avowed socialist.

Here's what Paul said in a Real Clear Politics interview posted on October 1:

"There may be no good guys in this war. You have ISIS on one side and Assad on the other. Really, part of the problem is ourselves, Saudi Arabia, and Qatar poured millions of tons of weapons into that civil war. That pushed Assad back and allowed ISIS to grow.
Remember, only a year or two ago, President Obama, Hillary Clinton and many Republicans wanted to bomb Assad. I think had we done that, ISIS may well now be in control of all Syria. We need to think before we act and understand that intervention doesn't always achieve the intended consequences."

In a statement to the Washington Post on October 3, Sanders said: "We must be very careful about not making a complex and dangerous situation in Syria even worse." He said he opposes at this point "a unilateral American non-fly zone in Syria, which could get us more deeply involved in that horrible civil war and lead to a never-ending U.S. entanglement in that region."

Thank you Bernie Sanders and Rand Paul for urging calm in the fevered tug of war underway in Washington.

The latest twist in the debate is the Washington Post report that senior national security advisors have recommended "measures that would move U.S. troops closer to the front lines in Iraq and Syria." The Post said the proposal "would represent a significant escalation of the American role in Iraq and Syria." In an editorial about the Pentagon proposal, the New York Times warned: "By incrementally increasing its combat role in a vast, complicated battleground, the United States is being sucked into a new Middle East war."

Before we up the ante with an increased military involvement in Syria, it is worth looking at our history of involvement in the Middle East. In 2003, we invaded Iraq and topped its leader, Saddam Hussein. In 2011, we helped a coalition remove Libya's Gaddafi. For the past two years, we have supported the anti-Assad rebels in Syria. All three countries remain in chaos. The ISIS extremists, who came to power after we took down Hussein and Gaddafi, now control parts of Iraq and Syria and are a rising threat in Syria.

Given our record, what are the chances for a more aggressive U.S. military presence to prevail in Syria? How many American soldiers would die? What would it cost? What would success look like?

We don't yet know what will happen in Syria, but we do know that the fighting in Iraq and Afghanistan since 2003 has cost more than 6,000 American lives and will cost the U.S. more than $6 trillion. Yet both of these countries--along with Syria--are sliding back into anarchy. When will we learn that we can't impose our version of democracy on the rest of the world? When will we learn that war is hell and that we fool ourselves when we go to war on the premise that we are doing so to preserve peace?

Diplomacy is the best response. Diplomacy worked in 1962, when it saved the world from nuclear war. Diplomacy can save us again. 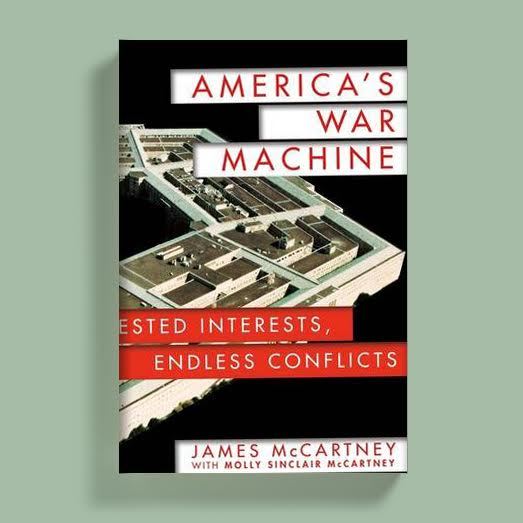 Molly Sinclair McCartney worked as a newspaper reporter more than 25 years, including 14 years at the Washington Post. In 2012 she was appointed a Woodrow Wilson Public Scholar in Washington D.C. to do the research and interviews needed to finish America's War Machine.