You'd be hard pressed to find a woman who has never been catcalled.

I was 10 the first time I experienced street harassment. I was exiting my elementary school with lots of other kids on a lovely spring day. Three boys I knew from class started shouting at me on the sidewalk, talking about my thighs and my ass. Two adults -- who were probably picking up their own children -- passed by without saying anything.

When puberty hit, I suddenly became an object for sale with various bidders letting me know of my best -- and, upon rejection, worst -- attributes.

As a woman, my mom wasn't surprised that my sister and I were being catcalled. But as a white woman (who is also short, very petite, pale and freckled, with green eyes and blond hair) with biracial children (I'm average height and curvy, with dark hair and eyes and light-brown skin), she was unprepared for a new reality -- one in which her kid is constantly catcalled in front of her, because people don't realize I'm her kid at all.

We were in an electronics store the first time it happened. I was 11. I walked in first, with my mom closely trailing behind me.

Being objectified was a new feeling for me. Half of me felt like I should take it as a compliment. After all, it was good to be pretty, right? That feeling soon became a tight pit in my stomach.

By the time we walked out, my mom had locked her arm into mine and began glaring at every man we saw -- whether he was staring me down or not. She half-yelled, half-whispered, "I need to get you a shirt that says 'I'm thirteen.'"

I sort of wished she could.

Stop Street Harassment, a nonprofit organization dedicated to documenting and ending gender-based street harassment worldwide, found that 65 percent of women have experienced street harassment or "unwanted comments, gestures and actions forced on a stranger in a public place without their consent and is directed at them because of their actual or perceived sex, gender, gender expression, or sexual orientation."

Catcalling is an awful thing that some call a compliment, and others call a way that people (most often, men) maintain power in public spaces by making them an unsafe space for women and feminine people. And it's not just annoying -- in some cases, it's outright dangerous.

Twenty-three percent of women have been sexually touched, 20 percent have been followed, and 9 percent have been forced to do something sexual, according to Stop Street Harassment. All of my female friends -- every single one -- has been catcalled at least once. It's our reality.

Having it happen in front of your mother makes the experience that much more horrendous. 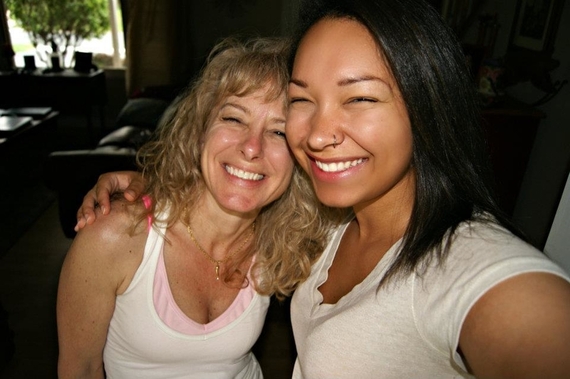 The grossest of the gross ("You look like you taste good" is one that never seems to leave my memory) have luckily not happened in front of her. Still, even a simple "Damn, girl" is twice as nauseating when my mom isn't even a foot away.

Being catcalled in front of my mom has deepened our relationship because it has made it impossible for us not to talk about what it means to be a woman in a sexist society. We've had incredible, and very difficult, conversations about what exactly that reality looks like. We've bonded over our shared experiences, and healed through that solidarity.

But catcalling has also forced us to recognize our differences. Because I'm a half-black, half-white biracial woman, my reality has been a little different from hers. We aren't approached by men in the same way.

I'm exoticized in a way that my white mother hasn't been because of the way that popular media hypes up mixed girls, turning us into objects to be captured and posted on Instagram rather than actual human beings who probably don't want their asses on any random stranger's account.

For white and Black men alike, I become an entry into a sort of fantasy, one in which they don't have to go all Black, or all white, but can get a taste of something new without commitment.

I remember boys in high school telling me that I'm perfect and any man would be happy to be with me, as if my value depends on how much men desire me. Tumblr's also filled with post after post about mixed girls being the perfect example of femininity.

Mixed girls who complain about this stereotype are called whiny and obnoxious. We're told we're seeking attention when we should be grateful to be noticed in such a 'positive way.'"

There isn't a term for this yet, so it often feels like that experience is imagined, like we're making it all up. But being perceived differently leads to being treated differently. It's a simple fact, and it isn't divisive -- it's recognizing that our realities are shaped both by how we're perceived and our identities.

Even our body positivity movement is overwhelmingly white; we talk about the necessity of varied sizes and shapes of bodies, but way less about colorism and how darker-skinned women are treated both in the dating world and at work.

There's nothing positive about this experience.

Being called exotic isn't a compliment. It makes me feel like an alien, or a unique fruit. While white women like my mother have experience with the misogyny inherent in a random man on the street telling you all the things he'd like to do to you, they aren't fetishized in the way that I am.

Coupled with the fact that mixed-race women are more likely to be sexually assaulted than both Black and white women, I constantly feel like I'm being hunted -- and there's nothing my mom can do to stop it.

One of my strongest memories of being hit on in front of my mother took place in the doctor's office. I was 13 and waiting for my check-up. She was to my right. My siblings, who were 11 and five at the time, were on my left. 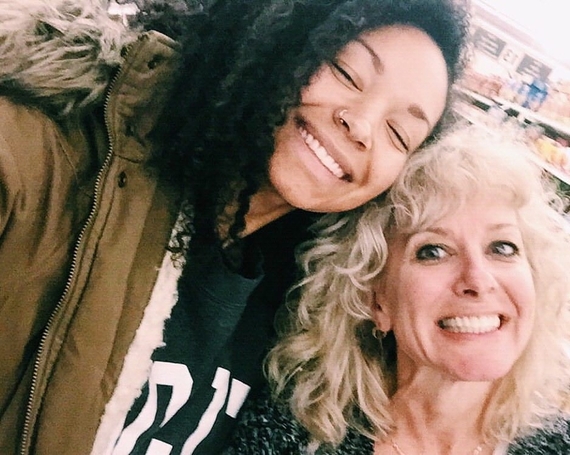 A man sitting across from me was looking at me in a way that was still new to me, so I wasn't sure whether or not I should be creeped out (looking back, it's clear that it wasn't just a friendly, Wow, doctors sure are slow today! sort of glance). It took a while for me to trust my instinct and let go of my assumption of best intentions when it came to men I didn't know.

The man in the doctor's office, probably 50, started rambling. I smiled politely.

Then he asked if my siblings were my kids.

My mom, totally shell-shocked, grabbed my arm and said, "No, they're mine."

Whether it's on the street or right in a doctor's office, I've spent the past decade or so trying to avoid the glances of strange men with the hope that maybe, just maybe, they'll take the hint and leave me alone. But they never do.

And with a mom who looks pretty much nothing like me, this means that I'll probably always be subjected to the alarming experience of men catcalling me in front of the small, blond, white woman who raised me.