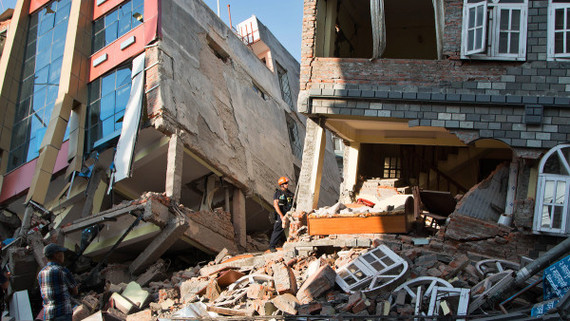 The morning after his brother's bachelor party, standing on the fourth floor of his family home, Dr. Arvind Goel, felt the ground move under his feet. "First it was minor vibrations and then it built up in a crescendo and then the couch where my four month old son was lying began to shake."

"It was creepy," Goel, 32, continued. "The furniture began to shake, then the light fixtures fell from the wall and then they began to swing like a pendulum. The large screen TV was about to fall."

Goel, a practicing nephrologist, was in Katmandu, Nepal, last month for his younger brother's wedding during the devastating earthquake which killed 8,800 and injured nearly 23,000 people. He shared his experience and what we can do to help.

Within seconds, as Goel realized he was in the midst of an earthquake, he grabbed his son and ran down the stairwell, which was familiar to him as a child growing up in the decades-old concrete reinforced house.

But when he reached the second floor, he heard his mother and father screaming God's name. Instinctively, he turned to help them, but he realized he could do little with his son in his arms. He continued down the staircase as the house began to tilt. "For those moments in the stairway, I was certain the walls were going to collapse on me," he recalls.

He reached the garden to find his wife and two-year-old daughter safe. His uncles and other wedding party guests were standing at the edge of the lawn, holding on to a tree and watching the house shake.

Frightened but not panicked, Goel handed his son to his wife and ran towards the house. His wife screamed, "Where are you going?"

"To get my parents."

Nearly a minute had lapsed and the shaking had slowed as he helped his mother and father down the stairs. Surprisingly, as the family stood awestruck, Goel's son was not crying. "He enjoys being rocked to sleep," he says. "And my daughter did not make much of the shaking. But it was seeing everyone screaming and terrified, this is what instilled fear in her."

Goel was lucky to survive because his family's home was well-reinforced. But that was not the case in the countryside where hundreds of village homes were wiped out. The following day Goel and his relatives went with medical kits to help others.

The Goel family was lucky to have a house that withstood the initial quake and the multiple aftershocks. No one was gravely injured. For four days everyone slept outside on the lawn far from the house. At times it rained, but they felt grateful to be safe. The marriage celebration was muted, but the family held a small simple traditional ceremony.

"No I am glad I was there with my family," he says. "What helped us was that we were all together. We were all in it. We were able to talk to each other and support each other through this disaster." I realized how true his words are. Natural or man-made disasters will happen. Yet, how we respond to them as a country, a city, a community, a family and as an individual is what often matters, and is most telling.

"What did you learn from the experience?" I asked Goel, now back in his white coat, in the hospital hallway, with a black stethoscope hung around his neck.

"Life is very unpredictable," he said thoughtfully. "Sometimes you can plan everything but in one minute everything can change. And in that unpredictability and in the moment of crisis your inner strength comes through."

More:
healthy living earthquakenepal
Newsletter Sign Up
The essential guide to taking care of your mind and body
Subscribe to HuffPost’s wellness email
Successfully Subscribed!
Wellness delivered to your inbox