On a late Friday night last fall, a 3-year-old boy arrived in the ER at my hospital. His parents reported that he had been experiencing cold-like symptoms and a fever for the previous few days, but that something had changed that night. When the doctor arrived in the little boy's room, it was clear the young patient was in distress. He was sitting forward, his mouth hanging open, with labored breathing and openly drooling. The symptoms were consistent with an unusual disease we don't see very often, but fortunately this young astute doctor recognized it immediately. The medical team ordered placement of a tracheal tube and the boy was rushed to the intensive care unit (ICU).

A year ago, a 10-week-old baby girl was admitted to the pediatric floor. She'd also been experiencing cold symptoms for a few days and had a worsening cough. However, before I even arrived in the room to examine her, the nurses called a "rapid response," which meant that something was very, very wrong. When I rushed to the bedside, the baby was blue, not breathing, and her heart rate was falling nearly to the point of needing CPR. She was stabilized within minutes and headed to the ICU in case she had another "episode."

Another case involved a 2-year-old boy who went to the ER after two days of high fever, poor appetite, and weakness. By the time the ER docs were able to see him, he was lethargic and unresponsive to his doctor and parents. His blood pressure was very low and he was difficult to arouse. Within minutes, he had two IVs in place, fluids and medications to try increasing his blood pressure, two strong antibiotics, and a tube down his trachea to help him breathe. He was placed on a ventilator and rushed to the ICU. 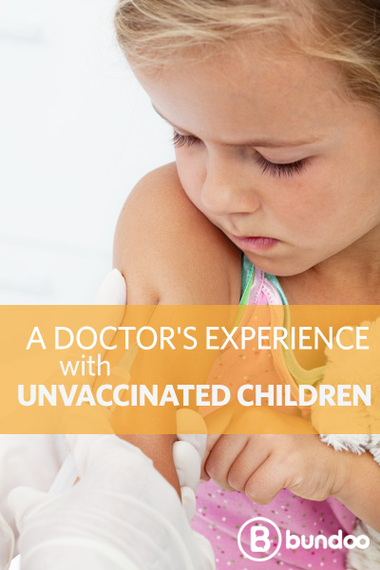 These three patients all suffered from different diseases, but they all had one major thing in common: none of them had been immunized, and all of their diseases were preventable with vaccines. The first two patients recovered fully, but the 2-year-old boy died within three days of being admitted from complications of sepsis.

When I was first learning how to be a pediatrician, my old attending doctors would tell story after story about the patients they used to treat before the current age of vaccines. They talked about these diseases in the past tense, and we younger doctors thought we would only read about these diseases in textbooks. We were trained to recognize and treat them, but at least for me, I didn't think it would be part of my day-to-day practice in caring for children. How unfortunate that in my 10 years of practice, I have seen more than my share of these diseases that so easily could have been prevented with vaccines.

I don't like to use scare tactics to convince parents to vaccinate their children, but these experiences are very real, and these three children all suffered terribly because they weren't immunized. If just one parent who is on the fence regarding vaccines reads this and decides to protect their child, I have done my job as a pediatrician.