During the month of March, Top Secret: The Battle for the Pentagon Papers played at the New York Theatre Workshop, presented in conjunction with L.A. Theatre Works and Affinity Collaborative Theater. Written by Geoffrey Cowan and Leroy Aarons, the play was accompanied by a series of twelve panel discussions delving into a range of topics from "Investigative Journalism, Then and Now" to "Truth and Fiction in the Docudrama." Guests included Daniel Ellsberg, Carl Bernstein, Robert Shrum, and Gregg Pierotti.

I attended the performance that featured "A Salute to Roy Aarons." A co-founder of the Maynard Institute For Journalism Education that trains minority journalists, Aarons died in 2004. In addition to founding the National Lesbian and Gay Journalists Association, Aarons was recognized for his activism on behalf of diversity.

The original format of the material, as developed by L.A. Theatre Works in 1991, was a play for National Public Radio. In 2007, Cowan revised the text by integrating previously unreleased documents and shifting Katherine Graham, publisher of the Washington Post, to the role of narrator. It was then reformatted as a stage presentation. 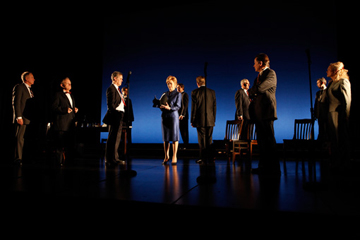 The core of the story centers on a pivotal decision that must be made by Graham in 1971. In question is whether she will give approval to print the documents Defense Secretary Robert S. McNamara ordered written to record the role of American involvement in Vietnam -- the Pentagon Papers. The action takes place after the New York Times (who received the materials first via reporter Neil Sheehan) has been ordered by a judge to discontinue publishing articles drawn from the classified information.

For those in the audience whose sensibilities have been formed by personal computers and the Internet, the milieu of a mere two decades ago may seem remote. During that time frame, both the New York Times and the Washington Post were macho enclaves. The 1968 Kerner Report, which made recommendations to the media about the employment of minorities and critically evaluated the media coverage of the urban riots, had yet to make an impact. At that juncture, the resources of newspapers to have a showdown with the government were more substantial. In today's world, if no one stepped up to publish the documents, the information would find its way to the Internet. The recent revelations on WikiLeaks showing Reuters journalists being killed in Iraqi are a prime example.

Cracks surfacing in the government's façade -- as they are less able to spin facts -- are noted by one of the main characters, Washington Post writer Murray Marder. He brought the term "credibility gap" into the popular vernacular when he used the phrase, originated by David Wise in a New York Herald article, in May 1965. Wise had pointed to the dichotomy between the facts being presented by the Johnson administration about the progress of the war, and the on-the-ground news dispatches from Vietnam.

In production notes, Cowan discusses how the play evolved from an undergraduate lecture course he taught in media law in the mid-70s. Cowan currently holds the Annenberg Family Chair in Communication Leadership at the University of Southern California's Annenberg School for Communication. I contacted him by e-mail for his impressions on how drama culled from actual events can impact the culture. He replied:

"By dealing with issues of current and enduring importance, as experienced by real people, the docudrama can be a powerful means of raising questions and provoking constructive debate. Hopefully the panels after Top Secret illustrated the kinds of exciting conversations that dramas based on fact can produce. We have all been at fascinating after-play discussions and many outstanding discussions follow works of fiction such as Doubt and Proof. But docudramas can often bring those discussions to another level by exploring how real people dealt with real issues."

For many in today's audiences, there is limited knowledge about Civil Action number 1235-71, United States of America versus the Washington Post Company, et al. When the case ended up at the United States Supreme Court, it was ruled that both newspapers were allowed to resume publication of the documents. Graham states that Justice Hugo Black wrote that the Times and the Post "should be commended for serving the purpose that the Founding Fathers saw so clearly."

For those unfamiliar with the history, Top Secret opens a door to understanding concerns of utmost relevance today.