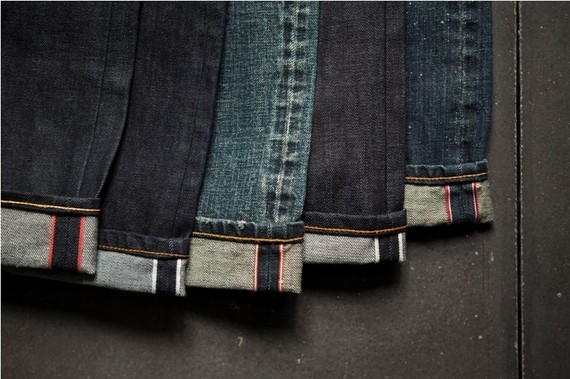 Like many Black Americans I was introduced to the perfection of Japanese denim by Hip-Hop. After I heard Jay Z say "these ain't Diesel, these is Evisu" on the Just Blaze produced, Blueprint 2 bonus track Show You How in 2002, I started investigating denim brands. Two years later I bought my first pair of Japanese denim- a pair of Evisu I scored from a menswear shop in Boston. And, I wore them everywhere for the next four years including on my trip to Japan in 2005. I loved those jeans and they were not my last pair of Japanese denim. I am currently breaking in two pairs of selvedge denim- an Edwin pair and a Uniqlo pair. To put it quite plainly: I am a proud denim enthusiast.

Last week I had the pleasure of watching a documentary about my mild obsession- Weaving Shibusa by filmmakers Devin Leisher, Erik Motta and Mehdi Ahmadi. It premiered to an audience in San Francisco on August 6th at an event hosted by Self Edge- a producer of the documentary and famed denim house. The film is beautiful with stunning shots all over Japan, intriguing interviews with denim legends and a trip to denim mecca Shinya Mills in Ibarra where denim brands such as Japan Blue, The Real McCoys, Fullcount and Denime are woven along with other members of the Osaka 5.

While denim was invented in America in the late 1800's, it was perfected in Japan. As told by Atsushi Matsushima of Lightning Magazine in the film, the story of Japanese denim begins in late 1940's and early 1950's Ueno, Tokyo during the American occupation. American military men would sell old clothes in underground markets where Japanese would rummage to find choice items. Matsushima goes on to explain that much like the automobile industry and electronics, the Japanese copied American culture when they became interested in denim. Throughout the late 20th Century and into the 21st Century Japan and America competed to see who could make the best cars, gadgets and jeans.

In the 1960's Japan started making their own jeans rather than import them from America or buy what was available in Japan. And, the Japanese put into making jeans the same attention to detail and eye for perfection that they put into everything else. While Americans have moved on to advanced technology to make denim, in Japan the best denim is still made on old shuttle looms that have been rescued from factories across the country. When Japanese denim makers want to add a particular feature to their jeans they talk of having to build a machine to make it. To them no detail is too small.

Another example of the Japanese attention to detail and pursuit of perfection comes in the dyeing process. Denim is dyed with indigo and liquid indigo is brown naturally. It turns blue when exposed to air. The process of using indigo is described in the film as a battle against nature. And, although the use of indigo is a painstaking process, the artisans at work never get to see the final outcome of their work because the real color of indigo comes after use. Only the owner of a pair of jeans will be able to appreciate their work.

Mikiharu Tsujita, the founder of Full Count, described the process he went through to find cotton suitable for his jeans. He said he did not like the feel of the cotton he was getting from America at first. It did not produce jeans as soft as the vintage jeans he was trying to emulate. So, he sourced cotton from Egypt, Switzerland, America and Peru before finally settling on cotton from Zimbabwe. There cotton is still picked by hand and goes through an old production style. Tsujita knew by the feel that he had to use Zimbabwean cotton.

Denim has truly lived a long life and has become more acceptable as time has passed. Masayohi Kobayashi of The Flat Head put it well when he said "I don't think there are any other clothing items that have stories like jeans." You can wear jeans for a decade and they only get better with time- in fit and color. Kazuhiko Hanzawa, founder of Marvin's Vintage, can tell the type of wearer of a pair of jeans by the fades. And, according to Yutaka Fujihara, director of BerBerJin, there will be no "next denim." In other words, no item will see the lifespan, utility and importance of jeans in fashion culture. So, if you have not been taking your denim purchases seriously, now may be the time to reconsider. The Japanese know denim and appreciate the art they are making when they make a pair of jeans. We can all learn something about appreciating the small things through the lens of Japanese denim.

I had the opportunity to connect with one of the directors of the film, Devin Leisher, via email and asked him to answer the following questions:

1. What gave you the idea to make a documentary about Japanese denim?


The idea came simply from personal interest. Japanese denim has been something i've been heavily interested in (and involved in on the forums) since about 2007-2008. I knew how difficult it was for people to get information on the topic, partly because of the secrecy of the brands, partly because of their inaccessibility in Japan, and felt that if I was only able to not only get "answers" for people, but also show the brands and figureheads and connect the enthusiasts to the makers, that I would have something very unique.

2. Why do you think the Japanese are able to take American products and drive them to perfection like they have with denim, cars and electronics?

I think the Japanese are able to take American products, and products from all over the world for that matter, and take them to the 'next level' because they are very singularly-focused and dedicate themselves to perfection. It is not at all uncommon for people in Japan to have the same career their entire lives. They want to be the best they can be at what they do, so they learn all they can about something, reverse engineer it to find the pitfalls, and make the better version. They do a lot to understand the "how" and "why" of things, which can lead to a better result versus just emulating and tweaking what a product is on the surface.


3. When will the film be released and where will people be able to watch it?

At this moment we are focusing on several screenings all over the world into December. Simultaneously, we are investigating various distribution plans we'd like to set forth with, but ultimately we plan to get this in peoples hand by New Years.