Many of Tennessee Williams' plays have cemented their status into American literary and pop culture. Since they were first written, they've been performed on stages both large and small with some degree of regularly through the decades. Cat on a Hot Tin Roof, The Glass Menagerie, and A Streetcar Named Desire come to mind. Williams, however, has over 40 lesser-known one-act plays to his credit, dating back to the 1930's. Thanks to the many dedicated admirers and students of the troubled yet prolific playwright, these short plays are occasionally revitalized on stages across America and beyond. This summer, the author who was born Thomas Lanier Williams III gets the spotlight at New York City's St. Luke's Theatre with two of those one act plays: 27 Wagons Full of Cotton from 1946, and Kingdom of Earth (later renamed The Seven Descents of Myrtle) from 1968. They are presented together in the Write Act Repertory Theatre's 2 By Tennessee Williams, directed by Marilyn Fried. While neither of these two under-seen plays may sound familiar to non-Williams fans, they both featured characters and stories memorable enough to have had filmmakers expand them for the big screen. 27 Wagons Full of Cotton was adapted into the controversial 1956 film Baby Doll, and the 1970 movie The Last of the Mobile Hot Shots was based on Kingdom of Earth. While many of Williams' lines may have the audience giggling at their quaintness (One character declares, "Mr. Vicarro, you're getting awf'ly familiar!" during a protracted seduction scene; another recalls about having her "cherry popped"...), the raw, human emotions underneath are timeless.

27 Wagons Full of Cotton is set in 1946 Mississippi. The audience meets Jake (played perfectly by Mike Keller), a boorish cotton gin owner, and his wife Flora (Kathryn Luce Garfunkel), a pretty but childlike blonde with tousled hair and a lazy Southern drawl. Whether from her innate personality, her admitted affinity for the oft-mentioned "dope", or the mental domination by Jake ("A woman like you's not made to have ideas. Made to be hugged an' squeezed!), Flora is a vulnerable figure. In an act of arson, the shady Jake burns down the mill of his neighbor Silva Vicarro (played with tantalizing restraint by Justin R G Holcomb), a rival in the cotton business. He demands that his "baby doll" Flora provide his alibi. I doubt that I'd be giving too much away to future audiences by revealing that Jake indeed gets "busted". That priceless moment when Vicarro learns what happened, by the way, is an exquisite piece of wordless acting by Holcomb. It's also the turning point of the piece, when the audience knows that something is going to happen next-- and that it's going to be quite dramatic. That "something" turns out to be an unforeseeable twist which gives a darkly comedic meaning to the play's oft-repeated mention of "good neighbor policy"-- as well as a conclusion which proves that revenge is a dish best served, well... steamy. 27 Wagons is Ms. Garfunkel's show all the way. Her Flora seems aware of her own naivete ("You have to excuse me from thinking. I'm too lazy.") but leaves enough room for us to believe that her character just may be more complex than she lets on.

In Kingdom of Earth, we meet another curious female character who finds herself something of a pawn between two men. Judy Jerome plays Myrtle, a 30-year old chestnut-haired beauty with classic pin-up girl looks and a colorful past. Her glamour contrasts sharply with her new "home": the depressing Mississippi farmhouse owned by her new husband, Lot (Holcomb). Lot is an older man who's dying from tuberculosis. The audience learns that the newlyweds had just met two days before. Shortly after the play begins, however, Lot ascends the stairs and is not seen again-- although his aggressive cough is heard offstage to remind us of his presence. Myrtle is not left alone, however. The farmhouse is also home to "Chicken" (Keller), Lot's blunt-spoken, socially isolated, and seemingly dim-witted half-brother. However, there's also a fourth, unseen character: an impending flood which threatens the property. The three human characters, combined with the soon-to-come rising waters, create a searing power dynamic within the play's claustrophobic setting. Savagely portrayed by Michael Keller, the character of Chicken simmers with magnified basic instincts of the animals he governs on his farm... and like Garfunkel's Flora of the first play, this character sends the audience home with a good amount of unresolved intrigue and curiosity (as well as an elevated heartrate...).

Located in one of the busiest and most popular neighborhoods of Manhattan, the St. Luke's Theater in 2016 is a long way (in every sense) from the Deep South of the past which inspired so many of Williams' writings. However, thanks to the dedication of the actors and director of 2 By Tennessee Williams, the audience has no difficulty being transported back to the author's hot and humid plantation of troubled, complicated characters and those timeless, raw human emotions I mentioned earlier. We hope that the company will venture further into Tennessee William's unique world in the future.

2 By Tennessee Williams continues through September 4, 2016, on Friday and Saturday evenings at 8PM and Sundays at 7PM, at The St. Luke's Theater, 308 West 46th Street, New York City. (between 8th and 9th Avenues). Visit www.twobytennessee.com for more information. 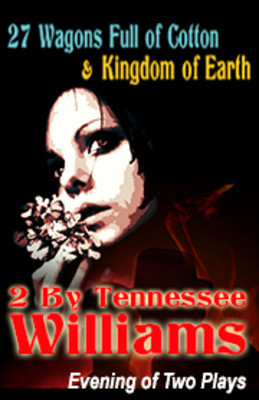