Before I begin the thankless, never-not-mortifying task of discussing late night texting etiquette, I must first declare this a shame-free space. That is, we must all agree that no one late-night texts elegantly, or eloquently, or respectably, and that's fine. We, as humans, are allowed the time and space to be reckless with our words, even if doing so makes us want to die the next afternoon when we wake up, groggily pull our phone out from under whichever limb it was wedged and see the (textual) damage we've done. To talk about late-night texting etiquette is to talk about flimsy sober intentions, so weak they crumble after one whiskey sour and a guy who has the same name as your ex.

I am the worst offender of inappropriate post-midnight communication. The occasional 3 a.m. "you uppp??!" or "ughh, ur tha worst" does not even begin to cover the scope of my shame. And I'm pretty sure I've gotten to the bottom of it: I don't properly express myself during day-to-day life, when my feelings are sober and the sun is still out. When you habitually keep your emotions bottled up and secret -- I don't like the way he's been treating me, I want to sleep with him, I wish my mom would stop nagging me about grad school applications -- it's more than likely they'll come out when your inhibitions are loosened, and hey, your phone's right there in your bra so why not get it (plus all those feelings) off your chest?

I will say, however, that I get a sick pleasure out of being on the receiving end of texts of the "u uppP?"-ilk. It's inherently flattering to be the person someone thinks of at 4 a.m. before he pukes and passes out. I woke up one Saturday morning to find this chain of texts on my phone, pictured below. Mind you, this was from a guy I'd met on Tinder when researching this handy dating app quiz. He'd blown me off nombreux times. (I say nombreux, meaning numerous, because he's French, all of which was recherche for another article I wrote on Tinder being a great language-learning tool.) 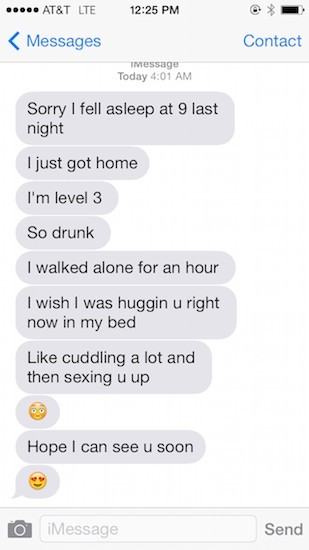 After the recovering from the initial flattery of him having want to "sex me up," I experienced mortification. If I were a more compassionate person, this mortification would have been for him. Rather, I was mortified to realize that this is how I come across when I text at 4 a.m. (Even if I'd never, ever, no matter how inebriated, use the phrase "sex you up." Not even ironically.)

There are apps you can buy that make you solve complex math problems to make sure you're sober enough to text, but I'm not so sure I like this. I really feel that humans should learn discretion on their own and that we should opt for self-reflection over app algorithms, even if this means that mortification after mortification must transpire before our behaviors can actually change. It's important to take precautions on your own, like deleting toxic numbers (belonging to old flames or, you know, professors) that you're likely to abuse. Just know that this won't always be enough. I once deleted a guy's number only to find myself, one drunken Friday's eve, overcome with the urge to text him. So I went on Twitter and tweeted at him, unknowingly inventing the Booty Tweet, asking him what he was up to. The next morning, I only noticed I'd done this when I went on Twitter to tweet a New York Times article on the AIDS epidemic in Africa. Oh, the shame.

Of course, it's always good to have friends around to stop you from late-night texting or tweeting or emailing or Facebook messaging. But that won't be enough. If you're in the mood to be destructive, you'll make it happen. You'll sneak off to the bathroom. You'll say your parents are calling and step outside of the bar. You'll pretend to check the weather. You might even say, "Oh, dammit, it's going to snow tomorrow!" to round-out the act. Which means that at the end of the day, when it comes to mortification in the form of regrettable, drunken electronic communication, the only real rule you must stick to is one of self-love and acceptance and humor. Of course, it helps to set guidelines. I, for one, have made a rule to never accept any invitation between the hours of 11 p.m. and 7 a.m. Last weekend, a guy texted me at 1:31 AM: "Please tell me ur tryna party tonight..." It was very easy to not respond to this. I know that in the future, however, there will be times when I want to respond and will respond. There will be times when I'll be asking guys if they're "tryna party."

I just hope that if I work on myself in the daytime -- acknowledging what I want, who I want, and how I feel about myself at any given moment -- this sort of thing will happen less in the nighttime. But when it does happen, well, it's going to be OK. Certainly nothing a Bloody Mary or seven can't solve.

I've Always Had a Boyfriend and It Isn't Always That Great

I Was on Reality TV: Behind the Scenes Secrets of Faking Real Life