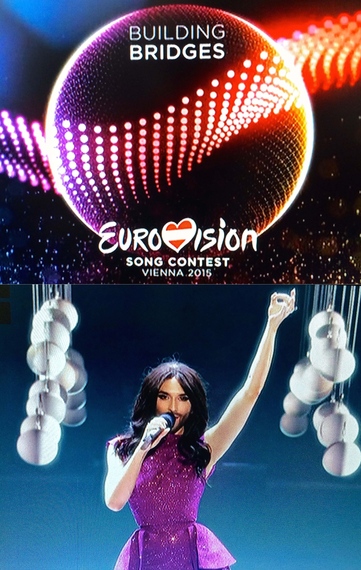 Criticism over the dearth of decent song entries from the UK gaped at us once too many times on Saturday night, as we stared back not so much in embarrassment as in shame. The appalling UK entry of this year's Eurovision's Song Contest was like telling the rest of Europe that it was a waste of time, for those performing and for those watching. Once again, a churlish but delusional belief that the UK is above the naffness of the contest means that the instigators of modern music were surpassed by their pupils, some of whom did rather well.

So a musically dominant Britain dribbled away more of its worldwide influence because of short-sightedness, and a large dose of snobbery. Can we genuinely dismiss an event watched by north of 200 million viewers, which in three hours produces a knock-on effect of cultural awareness and aspirational likability, and is one of the best projectors of soft power in a world of growing tensions over national differences?

Because something happened this weekend. The Eurovision Song Contest was totally cool. After Slovenia's schlocky start, Israel broke the ice of terribleness with a Fiddler-on-the-Roof-ish rap and then.. .a sequence of great songs! Norway, Sweden, Belgium and Australia impressed with verve, originality and catchiness, lest we forget this is pop. And before you ask, "Australia!?", the Ozzies were invited to celebrate 60 years of Eurovision, and got it right the very first time -- a Bruno Mars-inspired (more than derived) upbeat, slick and professional dance number.

The chink of creative light was quickly extinguished by Greece, who didn't get the memo, followed by Poland, Slovenia, Spain and Georgia, when never has so much make-up, sewing and demented eye movement led to nowhere. We endured expressions that looked like the singer had run out of loo paper and dancers with the grace of Grendel who dragged themselves over the floor like children greeting working parents at the front door.

Tuneless songs concluded with sighs of, "That's three minutes we'll never get back," from Graham Norton, our beloved commentator. For the Italians it was a popular three tenors format with the usual theme -- amore -- though this time, "en te, per te. and con te", from stereotypical handsomeness that if it came up to you in a bar, you'd laugh.

Yet effort, determination and hard work were everywhere, in contrast to British apathy. Even average songs were well-produced; Germany, Austria, as well as Latvia's petite Egyptian-like figure with a big voice, entertained us. The Cypriot effort at pseudo sentimental -- a lone poignant voice with strumming guitar -- was really not bad, even if it fell apart with Hungary. Even Montenegro's rump-pump-pumping away was, well, genuine.

Russia's chorus, "We believe, we believe in... ("taking Ukraine", we sang at the TV) ... the dream" (isn't that the same thing?), left the singer, Polina Gagarina, blathering tearfully after the performance. Putin has that effect, #Siberia #Gulag #polonium. When Russia was continually booed at its growing vote count, one of the presenters, a reminder of what defective robots could sound like, chirped that this was about the artists, not politics. Worth savouring the moment, however, when Conchita, last year's bearded drag queen winner, clutched Polina's hand in shared persecution solidarity. Worth imagining too the count of subcutaneous twitches on Putin's botoxed facial exterior.

So, in the words of the well-meaning presenter, this was not about politics, when Belarus, Moldova, Azerbaijan, Latvia, Estonia and Armenia voted for the awakening volcano of a hitherto Russian motherland, and Serbia, Albania and the Czech Republic sought to assuage its looming presence.

Slovenia voted for Montenegro - "there's a country doing much better than it should", pointed out Graham. The UK gave their top three votes to Italy, Australia and Sweden, even Russia got six points. At least we don't vote for our neighbours, maybe because we don't have any.

And Germany's "nul points"? A rejection of an artist this was not.

The Eurovision Song Contest, before trendy columnists lambast it to the depths of infernal bad taste, is about la-la love, solidarity, and diffusing the potential conflagration of tinder-dry nation states. There are far worse ways to entertain ourselves and benefit from the common interests of sharing the same continent, while being watched by yet another observer this year, as insignificant as a basking shark in a bowl of plankton, China.