Slave ships carried at least 11,000,000 captive Africans across the Atlantic, but we know the faces of hardly any of these people. Portraits of individual Africans who were enslaved and brought to the Americas are incredibly rare, and in virtually all instances the portraits were done long after those individuals had endured the horrors of the Middle Passage. There is one clear exception to this rule, however, a famous victim of the slave trade named Ayuba Suleiman Diallo. 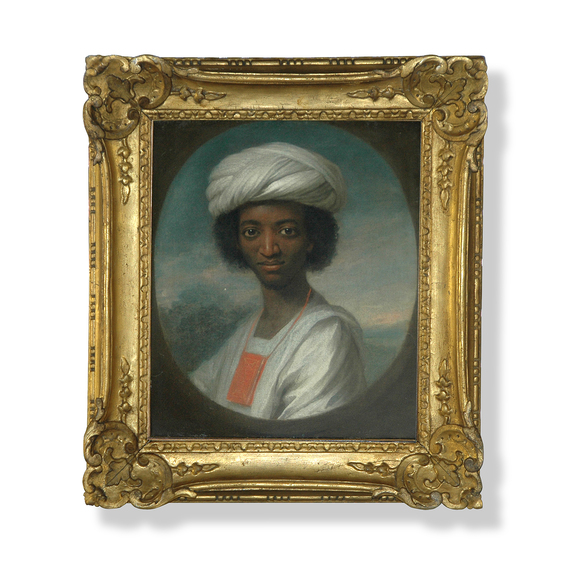 Recently my museum had the good fortune to acquire a portrait of Ayuba Suleiman Diallo, a Fulbe merchant and scholar who in 1731 was seized by his enemies in Senegal, sold to an English slaver, and transported to Colonial North America. Through a remarkable combination of luck, individual effort and social networking, Ayuba Suleiman's Middle Passage turned into a round trip. Not only that, but along the way he managed to have his portrait painted.

Ayuba Suleiman Diallo was about thirty years old when his transatlantic odyssey began. Born into a prominent, politically influential Fulbe family, he was a scholar of the Quran as well as a merchant. He was in no sense an opponent of the slave trade. In fact, he was on a journey to sell some of his slaves when he was captured and sold into slavery himself. In April, 1731 he was put aboard the slave ship Arabella with 168 other enslaved Africans, and a couple of months later sold in Annapolis, Maryland. Initially sent to labor on a tobacco plantation, he escaped but was recaptured quickly. This recapture was to be the turning point in the American chapter of Ayuba Suleiman's story.

The recapture brought Diallo into contact with an English attorney named Thomas Bluett, who was fascinated by the escaped slave's story and startled to discover that he could write in Arabic. Bluett helped Ayuba Suleiman send a letter written in Arabic back across the Atlantic describing his plight. In the meantime Bluett seems to have found more congenial work for the African scholar. We know that while waiting for replies to his letter, Diallo offered lessons in Arabic to a Maryland clergyman.

Back in England Ayuba Suleiman's letter came to the attention of James Oglethorpe, a wealthy philanthropist who had business interests in Africa. Oglethorpe was a man who had deep reservations about slavery, and he was moved by Diallo's story. With his encouragement arrangements were made to bring Ayuba Suleiman to Britain where his case could be studied more fully.

Once in Britain Ayuba Suleiman Diallo became something of a celebrity. The idea of a well born educated man being kidnapped and sold as a slave elicited sympathy even from people who had never before questioned the morality of slavery. Ayuba Suleiman was wined and dined by the aristocracy, introduced to Britain's royal family, and even asked to translate Arabic inscriptions by Sir Hans Sloane, a scholar and collector who was instrumental in the creation of the British Museum.

While in Britain Ayba Suleiman Diallo had his portrait painted by notable English artist William Hoare. There are two versions of the portrait known. One is owned by the Qatar Museums Authority, but currently on exhibit in Britain's national portrait gallery. The other belongs to the Jamestown-Yorktown Foundation, and will be featured in the permanent galleries of the American Revolution Museum at Yorktown, which will be opening in late 2016.

The portraits are remarkable works for a variety of reasons. They are unique for their time in that both show Ayuba Suleiman in African rather than European dress. This was done at Diallo's insistence. By this decision he is asserting his separate cultural identity from his English hosts. Diallo looks out from the canvas with an expression that is neither frightened nor angry. He is a man who knows who he is, and he calmly demands to be taken on his own terms.

We know however, that the Ayuba Suleiman Diallo shown in the portraits had just experienced what probably were the most traumatic events of his life. His personal encounter with slavery was very near in time. Ayuba Suleiman Diallo sat for William Hoare in 1733, the same year that he received his freedom, only a year after he was a plantation slave, and only two years after he endured the middle passage. He shows little or nothing of this in his face, but slavery is still part of his recent history, and it has to have changed him in some deep fashion.

Ayuba Suleiman Diallo's transatlantic odyssey ends happily enough. He returns to Africa, resumes his place in society, and lives almost another 40 years as a free man. This, of course, sets him apart from almost everybody else who experienced the middle passage. Some might say that his experience is so different from that of the 11,000,000 others that it lacks general relevance. The reality is, though, that every slave was an individual with his or her own story to tell. There were 11,000,000 unique stories, and just as many unique faces to go with them. Let's be happy that we still have Ayuba Suleiman Diallo's face.