Let's "face" it. Whether we "like" it or not, Facebook is now a major part of our social media crazed culture, and even more disturbingly, the modern relationship.

Double entendre's aside, these days, there's no question, if you're one of the 80 billion people who now use Facebook, your status -- or lack of it -- will most likely play a role in determining the future/current condition of your relationship. And here's the good news: Odds are, it's only going to get worse.

So as a Valentine's Day present, here are three fun examples of how Facebook is adding to the already impossible to solve problem of Love:

God forbid you've been dating for more than a month and your relationship status still says "It's Complicated," or even worse, nothing at all.

This one area, alone, has been known to be the main catalyst in the destruction of new unions before they've even had a proper start. Reasons for refusal to update the status can be anything from, the guy who's afraid his exes/stalkers will see he's finally moved on, to the girl(s) he keeps on the side who doesn't even know he's dating someone else. Either way, it's usually not good.

The strong female desire to share their love with the world and the twice as strong male one to keep it quiet, is what makes this area a very difficult passage to navigate. In my case, I have over 3,000 "friends," of whom I only actually know about five. Thus, I, personally, don't feel the need to share "my personal shit" with 3,000 friends who aren't really my friends. No matter, I will still get shit from my girlfriend just for mentioning this.

2. The All-Important "Like'"
Let's just say, I know a guy who knows a guy who recently took his new girlfriend to a party with all his friends. Pics were taken, people were tagged, comments were left, etc. etc. When they got home, his girlfriend wanted to know why his best friend - who happened to be female - 'liked' every one of the dozen or so comments on their picture, except hers. Was she sending her a message? Doesn't she 'like' her? Come to think of it, his bff was a bit cold when introductions were made. Maybe she has a crush on him and is jealous of her, and not liking her comment was her passive-aggressive way of saying it? You get the point.

Needless to say, this simple omission of a 'like' resulted in a multi-day argument, finally culminating in a phone call to the bff who innocently exclaimed, "Sorry, I must've missed that one."

Another area where the Like plays a crucial role is support. If you, or your significant other, decide to post a diatribe on women's rights, or gay marriage, or the horrible movies Adam Sandler makes, it better receive a 'like' from the other or the shit will hit the fan.

In rare cases, if you're a person who believes in staying friends with everyone, even your ex may give you shit for not liking his/her picture or update. This will almost always be followed by a fifteen minute query from your current squeeze as to why you liked your exes post. This one's an article in itself.

3. The ''Tag''
This one's simple. The rule is, if you're in a new relationship, you best be tagging that person in your pics or risk the consequences. Lord help the wayward soul who posts pics with his woman and doesn't tag her. I would not want to be in your shoes. This also applies to cases in which she may not be in the picture you posted, but was there that night and/or took the picture.

Additionally, if you're like me, you may hate being tagged in someone's pics without your knowledge. Call it vanity or whatever, but this undesirable trait also adds fuel to the Facebook fire and routinely acts as the antidote to happiness.

Bonus: The "New Friends" Game
Here's a bit of advice, which, to most guys, should be simple common sense: If you're going to send friend requests to a dozen, half-naked, hot chicks, try and space it out with some requests to old, fat guys as well. Might I suggest the Alfred Hitchcock Look-Alike Fan Club? The last thing your significant other needs to see is half the Hooters Australia Spring Calendar accepted your friend requests.

Factor in the above with the way the entire dating scene has gone from, "Here's my number" to "I sent you a friend request," and you can easily see how getting in trouble in the Facebook generation offers a whole new area of potential catastrophes.

Not only that, social media-induced lack of intimacy is even changing the way we express ourselves in our candy. This is getting weird.

I guess the one thing we can all take solace in -- both male and female -- is that, if you're in a relationship and on Facebook, odds are, you're doomed. Still, in spite of - or because of all of this - we mustn't be afraid to hold hands and/or kiss each other when the feeling arises. There's nothing wrong a public display of 'confection.' 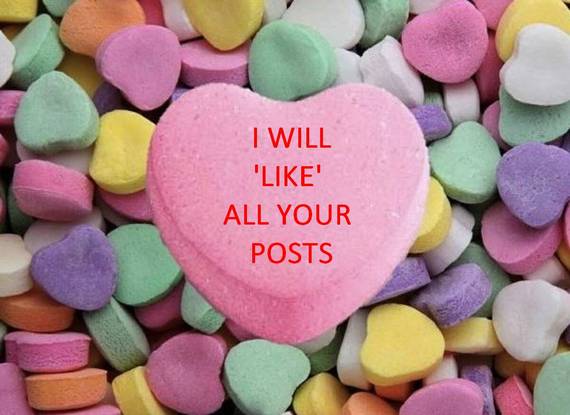