On July 27, 1990, a Muslim organization called Jamaat al Muslimeen instigated a coup against the government of Trinidad & Tobago. Forty-two insurgents stormed Parliament, taking Prime Minister A. N. R. Robinson and most of his cabinet hostage in The Red House, Trinidad's parliamentary building, for six days.

At the same time, another 72 rebels attacked the offices of Trinidad & Tobago Television. When instructed to order the army to stop firing on The Red House, Robinson instead instructed them to "attack with full force." At 6:00 p.m., Muslimeen leader Yasin Abu Bakr appeared on television and announced that the government had been overthrown and that he was negotiating with the army. He called for calm and said that there should be no looting. 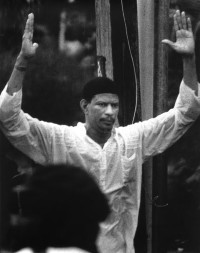 Instead, widespread arson and looting took place in the capitol of Port-of-Spain, causing millions in property damage. Twenty-four people died during the coup attempt before the Jamaat al Muslimeen members surrendered on August 1 after receiving a promise of amnesty from the government.

This story was compiled from interviews with Sally Grooms Cowal, Lacy A. Wright Jr., and John Allen Cushing. This account was compiled by J. Silverman

COWAL: Trinidad had its little political moment. That was just about the time of the Gulf War. The Iraqi invasion of Kuwait was taking place about the same time, so -- not that Trinidad would have gotten much notice anyway, but it got none -- because it was totally overtaken by events. I went down [to Port-of-Spain].

Trinidad was equally divided between the two major ethnic groups, and suddenly in about '89, a "middle way" political party called the NAR (National Alliance for Reconstruction) had sprung up. [It was led by] an Afro-Caribbean leader who had defected from the major African party, a guy named A.N.R. (Arthur Napoleon Raymond) Robinson...

They (the NAR) were this African party, and although they were very rich, their philosophy was more or less socialist. They pretty much squeezed out any opportunity for the private sector to do very much in Trinidad and also protected the little bit that there was by establishing very high tariff rates and non-tariff barriers to the importation of foreign goods...

[Charles] Gargano was my predecessor, and he paid almost no attention to the running of an embassy whatsoever, or doing the traditional things that ambassadors do. Still, he had a pretty good relationship with that government.

But in fact, I guess most weekends he went back to his family and friends in suburban New York, which is from whence he came, from Long Island. At the time the coup took place, he was actually on Long Island, and nobody knew that.

WRIGHT: The coup was by far the most dramatic event ever to have occurred in Trinidad and it was one which really shook the country to its foundations.

They were a very tiny sliver of the population, although I think they mined a rich lode of resentment among the poorer people in Port-of-Spain. They had no real power.

They had squatted on land and the government was in a constant quandary as to whether to throw them off of it. They had just taken over some land that belonged to the government and built on it. So Selwyn Richardson, Minister of National Security, it was his job to figure out how to deal with them. Eventually, he did not throw them off this land, but he made them stop building, earning their wrath.

They had a bunch of grievances against the government, some of them, I guess, valid, and most of them not. The way this happened, however, it could never have happened had they not received guns from guess where -- the United States of America. They had a guy, it turned out afterwards, who was the number two person in the organization. His name was Bilal [Abdullah].

He had taken a trip to Miami. He had made contact with an individual who was able to get him a cache of weaponry.

This was sent down to Trinidad disguised as something else. There was a sympathetic customs guy who had been paid off. These were the weapons that were used in this coup.

It also turned out that the Trinidadian Government knew that this guy Bilal had gone to Miami and [the government] had put in a request to the FBI to find out who [Bilal] had been meeting with. The FBI treated this, as far as I can tell, as a kind of routine request.

They threw it into a big hopper with lots of other requests and they finally got him an answer about a week after the coup occurred. Had they done this faster, [the coup] would not have occurred. This became an issue in the Trinidadian papers afterwards.

COWAL: I don't know that it was a coup attempt so much as a hostage-taking. A group of radical black Muslims took over the parliament house and held the prime minister and, I think, 26 members of parliament.

WRIGHT: The prime minister was brutalized during this takeover. Selwyn Richardson, the Minister of Defense, was shot in the leg, very badly treated... One person among the hostages died of a heart attack, but outside even more damage took place.

A fair amount of the downtown was burned down by looters, who took advantage of the situation to wreak havoc. Overall, about 20 people were killed during the whole thing.

So it was a very serious event, and I must say that the reaction of a lot of the Trinidadians, particularly to the Prime Minister, I found shocking. The Prime Minister (seen here) really behaved heroically during the time that this was going on. He was told at one point to go out and talk to the police and tell them to lay off, which he refused to do.

But he got no sympathy from most of the people, certainly from the common people, and instead of being treated like a hero when it was all over, he was the object of lots of criticism for various things.

Probably some of this had to do with his personality: he's kind of an erudite man who speaks like one. There's nothing common about him at all, and this clearly worked to his disadvantage as a politician...

The Muslimeen were being communicated with all the time by the government, which had set up a kind of command center. One of the first things that they did, after a day or so, was to cut off all the telephones to these guys except one.

They found out that these guys were calling all over the world, particularly from the radio station, and talking to the newspapers and everything. Since they owned the telephone system [cutting off phone access] was no problem.

They got in there and fixed it so the Muslimeen could talk to only one person, and that was the government spokesman. So that really contributed to a sense of isolation on their part. They were still making a lot of demands and there were people who wanted to give in to some of these demands.

COWAL: We [the U.S.] sent a team of FBI and people who specialized in hostage negotiation, and it was ended peacefully in the sense of the hostage takers walking out and surrendering and being arrested and then put on trial. This is now many years ago, but they were finally amnestied after some period of time in jail...This [coup attempt] happened right after the Fourth of July.

There were rumors going around that the USS Eisenhower had turned around and was steaming back to Port-of-Spain, which of course was not true. There were also other rumors that we had landed at the airport.

One of the main factors in the resolution of the coup was the staunchness of the Trinidadian military. Trinidad, being a small country, doesn't have a big military, but it has one, and it has a regiment. Their highest ranking officer is a brigadier general, who was a colonel at the time, and his name was Ralph Brown. Ralph Brown deserves a huge amount of the credit for saving Trinidad, and he did it by being absolutely tough ...