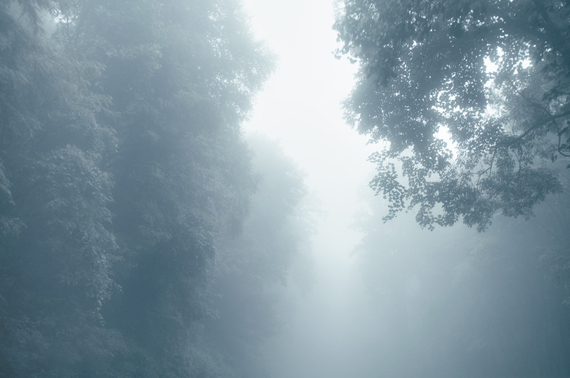 Memories are notes, sent to us by someone else.

Who is the one that possesses these notes? Could it be our present self or the one who first experienced the event? Or someone else, maybe somewhere in the middle, the one who possesses a memory faint enough but not completely faint. If we can sense the difference between them, then how many selves could there be and why they are so different among each other, complete strangers within a sequence based only on a faint physical resemblance? None of them is.

What do you have to do?
Pack your bags,
Go to the station without them,
Catch the train,
And leave yourself behind.

It may take a while to realize what already exists.

It is easier to notice the temporary, to observe and acknowledge what acquires form before our eyes, than what preexists our experience. The Self is present before all forms take shape, solid and coherent, in a motherly connection with the whole existence, unmanifested within the absolute. It doesn't change its form because form is something that takes place within its essence. It doesn't get revealed because, instead, it is the actual force that reveals everything else. Aristotle, in his Metaphysics, talked about the Unmoved Mover, the primary force that moves the whole cosmos without the need of moving itself. It is something that causes all the manifestations in the universe without the need of getting manifested itself.

And since that which is moved and is a mover is thus an intermediate,
there is something which causes motion without being moved,
and this is eternal, a substance and an actuality

Our physical presence follows a process of adaptation, first with the reflexes of our body, then with the functions of the mind. We witness the constant transition of our body from one stage to the other and we sense the transition of our mind, from one state to the other. An emotional connection is inevitably developed, a connection with what it was, what it is and what it will be, concerning the process of life as we experiencing it. Memories are an emotional value of this connection. To whom these memories belong though? Do they belong to who we were, to who we are, or to who we'll be? They really have no owner, because there is not one.

The Self has no identity, because it already is before all things and not after them.

As we grow older, moving with a steady pace from one stage of our life to the next, we keep finding ourselves behind a veil of identities. These are the identities our mind adopts after our private and social environment. During the second century AD, the Stoic philosopher Hierocles proposed the circle model of identity. This model states that we can actually see our identity as a system of concentric circles. The first circle is placed around the Self, the second one around the immediate family, then the extended family, the local community and eventually the whole humanity. Within these concentric circles we start to feel a sense of affinity, something that came to be known among the Stoics as Oikeiôsis. This process starts from our birth and gradually expands from the inner circle towards the outer ones. This is the way our identity is being developed. And it all starts from the birth. Hierocles, in his work Elements of Ethics, explains how this process is initiated, a mere act of perseverance.

And the sense of self-preservation arises out of affinity , the so called oikeiôsis; an animal when it has received the first perception of itself immediately becomes its own and familiar to itself and to its constitution


The mind adopts these identities in an effort to realize our very own existence. It tries to familiarize ourselves with our environment and this eventually becomes a process of acquiring an identity. Indeed, it is easier for the mind to notice the temporary, the occurring one, than what preexists its perceptive functions. In Hierocles' concentric circles, the only constant reference is the Self, since all the others are subject to unpredictable conditions. Awakening is the acknowledgement of this system and it means that we can reach back to the purity of our existence by abandoning the forced identities of our environment. We don't have to become someone else. We only have to look inside us.

Withdraw into yourself and look

We are not the ones presented in our memories.

There is a little story that the Greek biographer Plutarch shares with us, in his book about Theseus. It is a paradox that reflects on the nature of identity. He talks about how the people of Athens tried to preserve Theseus' ship, an effort to honor their beloved hero. They did a good job preserving it down to the time, it is said, of Demetrius Phalereus, the governor of Athens about a thousand years later. They had done everything that was possible but because of the bad condition of the ship they eventually had to take away the decayed old planks and replace them with new ones. After this happened, philosophers started questioning the identity of the ship, debating about either it was still the same ship or a different one. This paradox can be applied to our own identity, not only in terms of our constant physical transformation, but also in terms of how our mind is developed. Our mind changes its identity, influenced by its growth and environment. It can change over the years, a few or many times, but until we abandon this process and reach back to the purity of the Self, we keep following the tracks of this process.

All these transformations of identity are in fact none, since identity is only a mental function and not an actual fact.

When we return to the purity of what we are, free from identity, it is when we really understand that we didn't really own anything before that.