I have a confession to make. It's something I've been holding inside for a long, long time, and in light of my spiritual quest, I've decided honesty is the best policy.

In fact, I think he's an over-rated, self-indulgent, un-professional hack.

There. I said it.

[In the interest of disclosure (God, I love saying that! Sounds so professional.), and before I go any further, I have to admit: I own a Marc Jacobs bag. That said, I'm not a hypocrite. I just like the bag.]

But back to the fun stuff: What I think!

I think that calling Marc Jacobs a "designer" is bit of a stretch. That would imply that he actually sat down in front of a blank piece of paper and "designed" something from scratch. As far as I'm concerned (and yes, while I'm admittedly unimportant and admittedly have no idea what I'm talking about, my blog: my opinion), Marc's "design" process involves trolling vintage shops, copying the pattern, adding hearts, and changing the color to purple. But hey, people like vintage! And hearts! And purple! So, there's something to be said for that. He gives the people what they want, even if it's the same thing, over and over and over again.

That said, I could handle the cutesy designs and the purple hearts, and I could maybe even enjoy a little bit of the almost requisite designer drama, if it weren't for Marc's blatant lack of professionalism and complete disregard for other people. The man showed up to his own Spring 2008 show two hours late, at 11pm, and remarkably unapologetic. Two hours late? At eleven o'clock? At night?! No siree. Not okay with me.

The worst part of his fashion show shenanigans? Normally intelligent editors such as The New York Times' Cathy Horyn chose still to fawn over fashion's so-called golden child, leaving Suzy Menkes of The International Herald Tribune as one of the few with any common, let alone fashion sense! Suzy (rightfully) criticized the "parody of a show...with an inexcusably late start" as a "none-too-original vision of vintage clothes". Thank you, Suzy, my thoughts exactly! 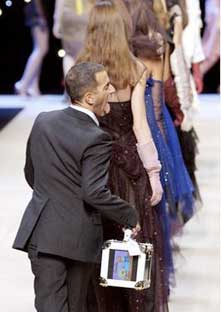 Marc's response to her honesty, that is, besides sticking his tongue out at her after his Louis Vuitton show in Paris? A hissy-fit of an interview with Women's Wear Daily:

"I expect people, whether we're two hours late or two hours early or we don't show at all, to look at what they see: the clothes. [Suzy Menkes] wants to observe a Jewish holiday, but I start a show two hours late [and] she gets her nose bent out of shape."

No, Marc. A fashion show is a presentation. If you show two hours late, expect to be judged on your presentation. And more importantly, if fashion is style, and style is all about presenting yourself, (and, of course, we all know how I feel about manners), what says more about a person's presentation than the embarrassingly poor etiquette it takes to keep people waiting for two hours?

But it's only fair to show both sides of the story, so let it be known that Marc has every intention of making amends! For fall, he has given up his long-held Monday night, 9pm slot for a Friday night, 7pm slot. The amazingly circular logic? That it can't be "[guaranteed] that Marc won't be late... and if [the show] comes late, it comes late. Even if he's two hours late, people can still go to dinner at 9:00 or 9:30." How very thoughtful! Oh, don't forget that the new show time is "a nightmare for [his] salespeople...but [they'd] rather be inconvenienced than anyone else." Aww, thanks! Who doesn't enjoy a side of guilt with their apology?

So look, while I know that it's like, totes not cool to be anti-Marc, at least I know I've got the powers-that-be on my side. At his Marc Jacobs show in New York, the Anna Wintour had this to say about the fashion world's enfant terrible: "It's not as if he's some young 19-year-old. He's a grown-up with a huge organization behind him."

And that's exactly it:

Marc Jacobs, get off The Hills, get over yourself, and most importantly, grow up.

Come back every other Tuesday for more stylish opinion by Verena von Pfetten.