"How can they all be so insensitive!" I asked my sister on the first Father's Day after our dad's passing.

At 19-years-old, that Father's Day felt like the whole world was mocking me for no longer having a father to celebrate. No one to take out to dinner. No one to call on the phone. And worst of all, no one to share those moments with ever again.

It was an unexpected reality I hadn't considered while crying at his funeral a month earlier. Every year the nation would pause to commemorate their dads, and I would go on like any other day. I wouldn't watch him preach a Sunday sermon the way I had during his years as a Lutheran minister. There'd be no "cheers" shared over one of his favorite cheap beers. And he wouldn't ask for my help repairing an old car for its next road trip.

Father's Day has been tough ever since. Facebook is covered in photos of friends hugging their dads. News channels talk of heroic fathers returning from war, or what celebrity dads are doing with their kids. And every advertisement seems designed to remind me I don't have a dad to give a gift.

This year, however, will be different.

For the first time in the 10 years since he passed, I have a gift for my father:

When my dad died at age 58, one of the realities that struck the hardest was all the life he'd never get to live. He'd never get to meet his grandkids. Never get to experience the Florida house he'd built to escape cold winters. And never get to take the long road trips his retirement would provide the time for.

For a 19-year-old who planned to be responsible, invest a bunch in my 20s, then be the 65-year-old millionaire my high-school economics teachers talked about, my dad's death changed everything. It showed me retirement isn't guaranteed.

So six years later, when I finished grad school, instead of contributing to my 401k, I examined my small savings and decided to do something else. At age 25 I climbed into the hail-battered Hyundai Elantra inherited from my father, and embarked on a 260 day "Dream Road Trip" to 46 North American states/provinces. 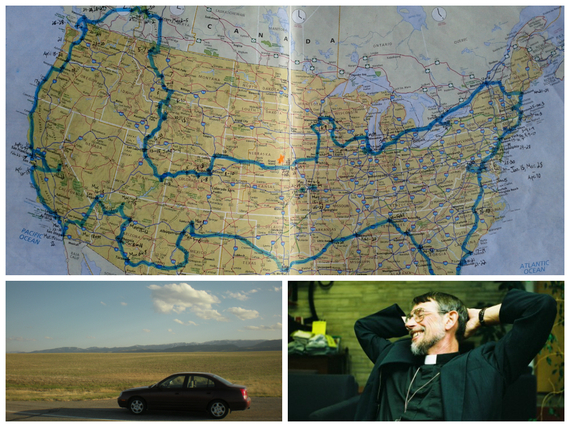 As I drove the final leg of that journey, amidst the cornfields and big Nebraska sky of my home state, I realized something magnificent had occurred over the past 16,400 miles: I had experienced a piece of my retirement. Instead of waiting until I was 65, I'd sliced off a year and inserted it to a time I was guaranteed to reach: present day.

Recognizing this was the retirement my father never got, I vowed to continue, taking one year off every five years for the rest of my life. That way, if I were to die at age 58 like my dad, I will have already experienced seven years of retirement.

With my 30th birthday approaching next year, it's time to buck up or shut up.

So on April 29, 2016, the 11th anniversary of my dad's passing, I will embark on a world record road trip to become the youngest person to visit all 410 units of the United States National Park System, and the sole person to do so on one contiguous trip.

I will be able to see America's most beautiful and culturally relevant places during the 100th anniversary of the National Parks, and fulfill my father's retirement by bringing him along--even if only in spirit.

So this June 21st, as I continue preparing for my next "year of retirement," for the first time Father's Day won't hurt so bad. While I'll still lament the milestones I wish he was here for, and stay away from Facebook all day, when I "cheers" my dad with the cheapest beer I can find, I'll look forward to 2016: carrying him with me as I launch onto the open road for the next installment of our shared retirement.

More in this video or at www.TBCMikah.com

More:
cancer father's dayNational ParksDreamsParenting
Newsletter Sign Up
Raise the kind of person you'd like to know
Subscribe to our parenting newsletter.
Successfully Subscribed!
Realness delivered to your inbox

Travel blogger at TBCmikah.com - author, ‘Life’s More Fun When You Talk to Strangers’