It was April of 2001, a few months before 9/11, and we were on a plane to the U.S. We were leaving everything behind -- our family, friends, our comfort zone, and moving to a new country, but as I looked over at my dad across the aisle, it didn't feel scary. He, an engineer, had been transferred to a large company in Houston, Texas, so we packed up our family of five, and off we went.

My father had a simple beginning. What he didn't have (and still doesn't), is a simple mind. Growing up in Brazil isn't easy, I would know because I spent the first 15 years of my life there. He spent his first 45. There is a lot of resistance, a lot of difficulty, and not a lot of opportunity. My dad found a way to fight his way through school, then enrolled at the most prestigious Polytechnic School of Engineering, and began his career.

My parents got married at 26, and my mom moved away from the small, quaint town she was from. This was yet was another brave risk my father took, believing he could give her and their future family a better life in a bigger city. My mom was also a brave one, for taking on the challenge. As his career started taking off, he had a job opportunity in Sweden. Now, my older brother and I were part of the picture (we were one and three at the time), and that presented new challenges. I don't know many people like my father, who believe in themselves and have the confidence to know they can achieve anything they go for. Moving to an entirely new country with their baby and toddler, not knowing the language, isn't for everyone, but he wasn't fazed.

We lived in Stockholm, Sweden for a little over a year. My dad learned the language within a couple of months so that he could work, and mom stayed home with us. That was a big move for his career, and after a year or so, we were back in Sao Paulo, Brazil. As the years passed, growing up with my dad was somewhat like living with a rockstar. In those days, leaving the country was for "other people", and he was always traveling. He would come back from a work trip, and as soon as he walked in the door, my brothers and I would line up and stare expectantly at his suitcase like the children in Les Miserables, waiting for the goodies he would bring us. Without fail, he would always bring me one of those tiny jam jars you get at hotels at breakfast. He knew I loved them, and I collected them like they were jewels.

After a few more moves here and there, we moved to Houston and it felt like a permanent change. My dad's career was doing great, and we were able to have what seemed like a huge house with a one-acre yard, something unheard of in the crammed city of Sao Paulo. Now in High School, we all had cars, something else we never dreamed of. My dad traveled most of the time for work, but he never wanted to put the burden on the family, so we lived in a nice suburb and he would drive an hour and back to the airport every few days. Every trip, I would get a tiny jam jar.

I never once saw my dad complain, and that was something that stayed with me. He also never boasted, bragged, or talked about money, another thing I take with me. Being brilliant doesn't nullify the need for humility, and that is a trait I learned from my dad throughout the years. Everything felt safe when he was around, because he never panicked, regardless of the circumstances. When hurricanes Katrina and Rita hit Houston, he calmly taped all the windows in the house, packed up important documents (the man has a folder for everything), put us all in the minivan, and started what turned out to be a fourteen-hour drive to Dallas. "Better safe than sorry," he said.

Nowadays, he is an entrepreneur and an investor, and is always looking for ways to increase his talents and abilities. He showed me with his actions, what kind of man I should marry. I can happily say I am now married to an engineer as well, what a surprise. Seeing my dad give his life for our family, and work so hard without ever complaining, inspired me to go for my dreams and not be afraid of failure. His fearless spirit to just go for something new and try it, put that spirit in me as well. To this day, he still brings me the tiny jam jars, and I am now almost 30. It's just one of those "dad and daughter" things we share. Every time he hands me one of those tiny jars after a trip, I am reminded that with everything you do, family comes first. 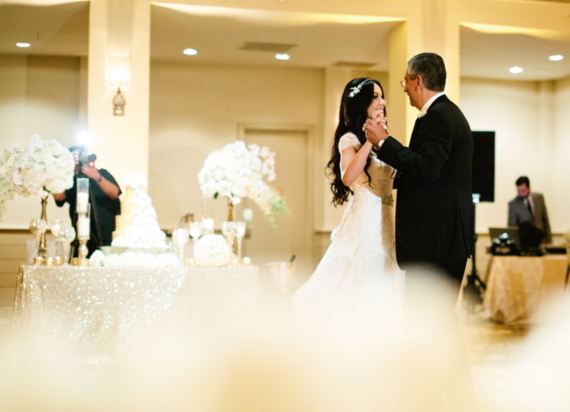 My father and I at my wedding. (Photography by Kelly Rucker Photography)