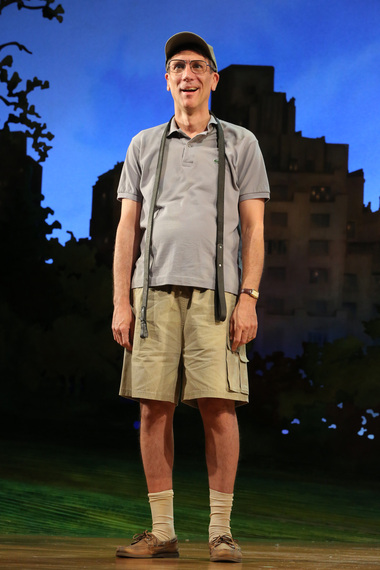 We should all have dogs. It should be put in the constitution. It's not just a right, it's an obligation. -- from Sylvia by A.R. Gurney

A.R. Gurney obviously feels strongly on the subject of dogs, so much in fact that his play Sylvia, is based on real events in his life. I've owned dogs for most of my life, and my last dog, Blue, had a profound effect on me and my family. She was with us for nearly 16 years and our veterinarian summed it up perfectly at the end: "If this family agrees on only one thing it's that you all love this dog and she's made your family stronger!"

As much as they enhance our lives, dogs disrupt them as well, and Gurney certainly understands that. In the play, Greg (Matthew Broderick) has an argument with his boss and goes to Central Park to cool off. He finds a stray dog, decides to keep it and brings her home to his apartment, an empty nest he shares with his wife Kate (Julie White). What's most unique about the show (yes, it's a comedy) is that the title character is played by an actress, Tony Award winner Annaleigh Ashford. The interaction between Greg, Kate and Sylvia is hilarious and remarkably believable as is what happens between them and people they know and meet as a result of owning a dog.

I visited cast member Robert Sella in his dressing room at the Cort Theatre to discuss the show and dog owners in general so we had plenty to talk about. "A.R. Gurney is a fantastic writer with such a great voice and he really conveys just how much we love our animals," said Sella. "This play is really a love story -- not just between the dog and Greg but between him and his wife too. This is a very realistic marriage that's undergoing a change as a result of a dog, and once we accept that the dog is played by a human being - and brilliantly I might add - by Annaleigh Ashford, then we go with it." Greg and Kate have built something special and the question posed is do they let this outsider into what they've created. "It's about love and sharing," explained Sella.

Sella and I talked about how insular our lives can be and how dogs introduce us to different people, places and things, which is what Sella brings to the show. "I've been really fortunate in my career to make a living as an actor and that is a rare thing to say," he said. What's even more of a rarity is in Sylvia he gets to play three very distinct roles: a man (Tom), a woman (Phyllis) and a person of questionable gender (Leslie). As a result of owning a dog, I've met a wildly diverse group of people that I never would have known and Sella gets that. "There's a line in the show about owning a dog being a truly democratic experience," he said. 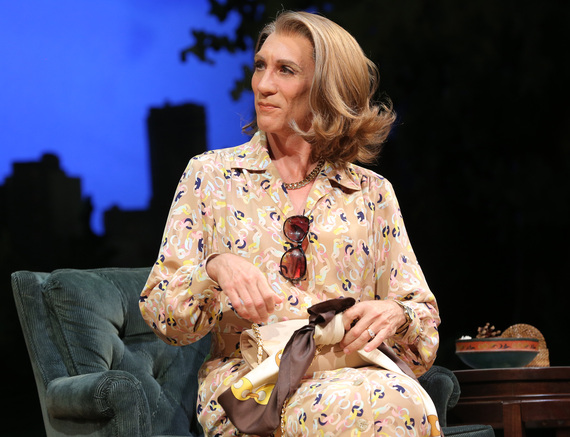 If you pick up a starving dog and make him prosperous, he will not bite you. This is the principal difference between a dog and a man. -- Mark Twain

Sella assured me that audiences will completely accept Ashford in the role of a dog. "Dan Sullivan - our director - has been brilliant in determining how far to go. He's really set the tone with how much of the show is pure delight and how much of it is a real moment in these characters lives that's moving the plot forward."

Sella gives credit to his wig and costume designers (respectively) Matthew Wilson and Ann Roth "who help me so much and make my characters come alive," and I think the photos of Sella speak volumes. "I can't say that I love one more than the other. I'm so excited to come out each time as these different people and see the audience's reaction. I love each one for different reasons and I'm grateful that they're in the play." 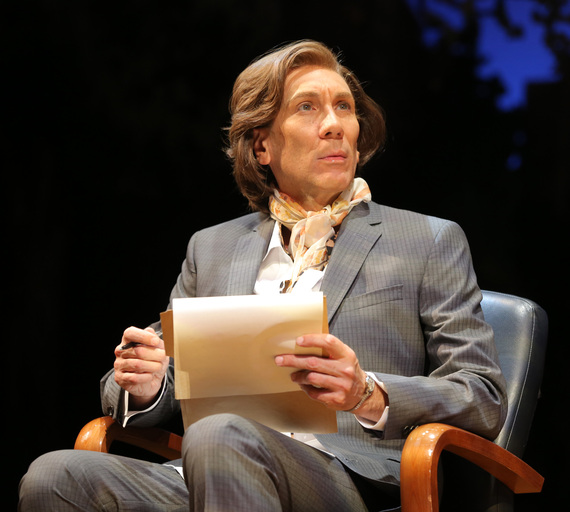 Sylvia originally opened off-Broadway in 1995 and after reading the play I'm amazed that it didn't get more attention. However, since then dogs have become more popular than ever and there are thousands of books on the market about dogs as well as countless reality shows. There is nothing like coming home alone and being greeted by a dog. They don't care how much money we make, how we dress or how much we weigh. Most of us understand how dogs love us unconditionally but only A.R. Gurney has written a play about it.

A dog is the only thing on earth that loves you more than you love yourself. -- Josh Billings