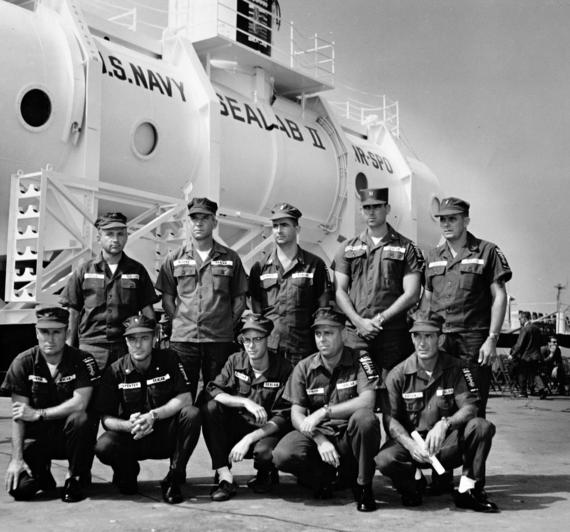 Fifty years ago, some historic stuff was happening off the coast of Southern California during a sea-floor mission that was like a corollary to the moon landing, with its own brand of small steps for man and giant leaps for mankind.

The steps, and the leaps, were taken by divers who lived for days at a time in a cylindrical shelter called SEALAB II, a 200-ton prototype that was about the size of a city bus and looked something like a customized railway tank car. At the end of August 1965, this underwater version of a space station was set up on the seabed about a mile offshore from La Jolla, near San Diego, California.

I'm pointing this out because as much as we Americans love to celebrate anniversaries, this humble blog post may be the only thing you read or hear about the golden anniversary of the longest and most successful of the U.S. Navy's three SEALAB experiments, which ushered in a sea change (sorry!) in deep diving and manned underwater activities.

Why so little fanfare? 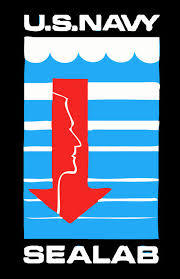 It's a good question. For all its game-changing significance, SEALAB II - like SEALAB I, its immediate predecessor - often seemed relegated to an Orwellian-style Memory Hole, as if it were some sort of military secret. It wasn't meant to be, but neither was the Navy a Madison Avenue master of advertising. And funding for SEALAB was a drop in the bucket of space program expenditures, so the modest tab for SEALAB - your tax dollars at work! - was less of a catalyst for media scrutiny and public interest.

Also missing was the underlying Cold War drama that infused the space race. The SEALAB rivals were mostly friendly, like France's legendary Jacques Cousteau and the American inventor Ed Link, who both took cues from the Navy's SEALAB-related research to pursue their own projects aimed at advancing the futuristic cause of living and working in the sea.

From SEALAB came the long-elusive proof that human divers could not only go deeper than ever thought possible, they could stay down far longer - hours, days, even weeks instead of mere minutes. The prospect of sending people to explore the Earth's hidden depths - "inner space," as some liked to say - was becoming as promising as sending them to the moon and outer space.

But news coverage of SEALAB and its breakthroughs was nonetheless sketchy - I read (and watched) virtually all of it in researching my book about the SEALAB program. When SEALAB did get some limelight, it was easily eclipsed by the big headlines and televised rocket launches of the better-funded space program.

One logical if unfortunate outcome was that we the public - especially during those ink-dominated, pre-Internet years - never got schooled in the considerable risks and technical challenges the SEALAB crews faced, and certainly not to the extent we got tuned into what the lionized astronauts were up against. As Will Rogers said, "All I know is just what I read in the papers."

The divers who (bravely!) volunteered to become "aquanauts" - a descriptor for sea-dwelling humans that never really caught on - faced dangers that rivaled those of their space-bound counterparts, in part because they were trying out a novel method called "saturation diving."

Saturation diving - though commonplace nowadays for long-duration, deep-sea endeavors - never entered the layman's lexicon in the way that a feat like supersonic flight did.

You can hear one of the many lesser-known challenges of a SEALAB-style saturation dive in a mirthful video slide show set to the audio recording of a pro forma call from President Lyndon Johnson to Scott Carpenter, the Mercury Project astronaut of Right Stuff fame who joined the SEALAB program.

As striking (and comical) as the Donald Duck-like timbre of Carpenter's voice are the utterly flummoxed presidential telephone operators - their confusion is an unvarnished testament to the general lack of awareness about SEALAB, despite what Johnson says about how "the nation's very proud." The other voice you hear, besides the President's, is that of the gently drawling but insistent Capt. George F. Bond, the father of SEALAB, as Bond joins Carpenter in trying to explain the cause of "helium speech" - and prevent the skeptical operators from hanging up on Carpenter, who was completing a record-setting 30 days in SEALAB II.

While a hindrance to communication, helium speech was actually among the least of the SEALAB aquanauts' concerns.

Higher on the list was SEALAB itself, a newfangled structure in which the dry air pressure inside had to be maintained to match the pressure of the water outside. This setup made it possible to have an open hatch in the floor; the equalized pressure stopped the water at the brim of the hatch, and the aquanauts could come and go from their shelter at any time of day or night, giving them unprecedented access to the seabed - the key to the SEALAB concept.

A loss of pressure would mean a flooded lab, and that would of course be bad, especially since swimming for the surface was not an option. Even from SEALAB II's trial depth of 205 feet - a few years later they would aim for 600 feet and beyond - a swimming aquanaut would be dead before reaching the surface from "explosive decompression," a fate that's as nasty as it sounds, sort of the physiological equivalent of shaking a soda can and cracking it open.

So, unbeknownst to many, a SEALAB aquanaut might as well have been in orbit.

Pressure was one factor, but also the "air" inside the lab wasn't actually air, as in the ordinary atmospheric mixture of about 79 percent nitrogen and 20 percent oxygen. Breathing ordinary air at a pressure as high as the water pressure at 200 feet would put you into a drunken stupor and kill you. So a new gaseous recipe had been devised, one with less nitrogen, less oxygen, and a whole lot of helium instead - thus Carpenter's cartoonish falsetto.

Maintaining a safe gas mixture was yet another cause for concern, and there were many others, like the early incarnations of SCUBA and similar breathing gear, which had none of the fail-safe mechanisms, warning systems or nifty computerized monitors and gauges of today. There were lots of prototype systems, some pesky sea creatures, frigid water with shifting visibility and currents, even a trained porpoise named Tuffy who hadn't quite mastered the task of rescuing a stranded aquanaut.

These were among the reasons Scott Carpenter would often say that his SEALAB experience was more daunting than his space flight, and in many ways a greater achievement. In any case, SEALAB II's month-and-a-half-long mission is worth commemorating for the scientific, commercial and military diving spin-offs that are still with us, possibly including the Navy's clandestine practice of deploying saturation divers from submarines outfitted with the equivalent of a mini-SEALAB. But whether or not such spy missions still go on is a secret - and perhaps another reason you won't be hearing much about the 50th of SEALAB II.