The first moment I realized I was a bona fide, no-turning-back boy mom took place when Jack was 6 weeks old. My husband's boss wanted him to come on a business trip to Miami, and (really kindly) suggested I come along with the baby, for a little change of scenery. What a great idea, how fun! Three sleepless days and nights later I was heading home solo with my crabby baby. Fed child on plane. Burped child on plane. Child vomited into my bra on plane. Child pooped violently on plane (no, you're not missing any gender point yet). We arrived home in a cab with all of the windows open as far as they could go, both of us covered in misc. body fluids.

I peeled off his revolting, horrific onesie, holding him with one hand on the changing table while I rooted around underneath for a diaper. As I did this, I heard a strange sound, much like burbling. I looked up. He was urinating in an arc into his own mouth and gargling on it. A biological feat not achievable by even the most talented, pliant girl baby. Boy Mom Moment #1.

I am hardly a sexist, and don't think of myself as a person prone to stereotypes. I go out of my way not to assume my kids wouldn't want the pink shirt, or that my nieces wouldn't enjoy a monster truck rally as much as the next kid (they wouldn't). But now, having been the mother of boys for one and a half decades, there are some things I believe to be true. 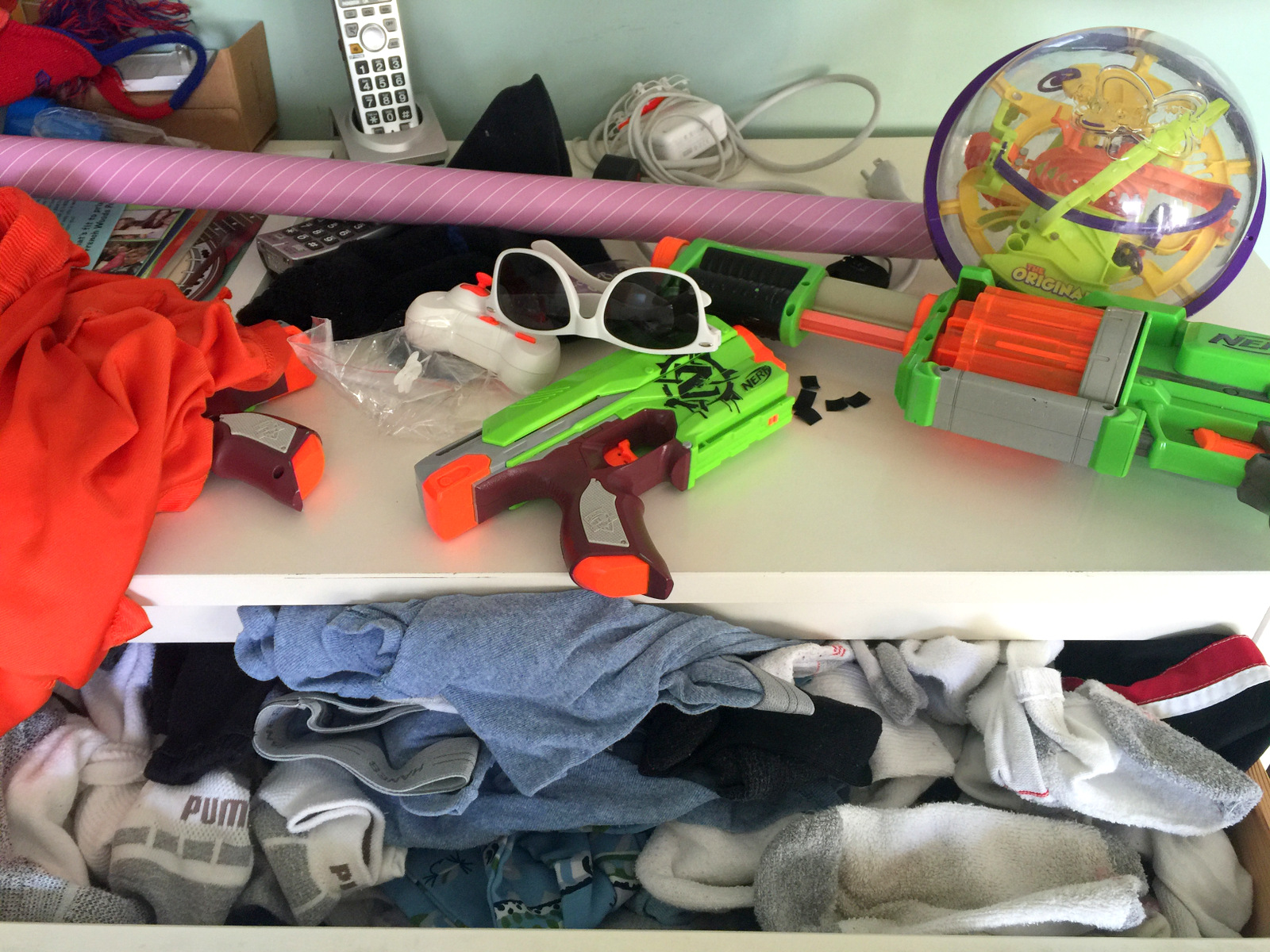 It was 2007. I was standing with my two young sons outside of our new house. I enthusiastically pointed out the rose bush growing near the front door: "Aren't those flowers so pretty?" I asked. "Yeah," said Jack (7). A moment of silence followed where (I thought) we were admiring nature's beauty. He then added, "I wonder if I peed on them how fast they would die." Would a girl have made that comment? Not impossible. Improbable, however. I simply cannot imagine any of my four nieces gazing at those flowers and musing about how fast her urine would cause them to wither.

Everything Is a Gun.

Oh sure, at first you say, "I'm not going to get toy guns, because I don't want my kids to think they are playthings." But then they build them out of Legos, Matchbox car tracks, toilet paper holders... out of thin air, it seems. And then your Great-Uncle Ivan buys them a Nerf gun and your mother-in-law purses her lips as you begin to protest (her boys played with guns, and they turned out just fine, didn't they?... I married one of them, didn't I?) and you sigh and your son ecstatically runs off to threaten the dog.

A deep pleasure in offensive, inappropriate humor is also deeply embedded in boys. Please; I know this is not exclusive to boys. I too love offensive, inappropriate humor (and I would watch and listen to Melissa McCarthy and Amy Schumer any day of the week), but I'm going to go out on a gender-politically-incorrect limb and say that, in general, boys seem to latch onto it more readily than girls.

Here is Charlie at age 8:

Charlie: "A man was in a car accident. He went to the hospital and they looked him over. The doctor said, 'Well, everything seems to be OK, except for one part. Your penis. We have to replace it. Lucky for you we have the technology. It's $1,000 an inch to replace. Go home and discuss it with your wife and come back tomorrow.'

"The next day the man comes back. The doctor says, 'So, did you discuss it with your wife? How many inches?'

"The man says, 'Well, we've decided not to get a new penis. We're getting granite countertops instead.'"

Me (crying-laughing): "Where did you hear that?"

Charlie: "On the radio."

Then I get to explain it.

And then of course, being the mom of boys also means that you get to hear what they think of girls. The older they get, the less you hear, but you still get to observe. And when they are younger, before they realize how obsolete, aged and stupid we are, they can be quite forthcoming.

Charlie, at age 9: "You know mom, I wasn't looking for girlfriends, but they just sort of happened and I said OK, and it's turned out to be pretty nice." (How do we freeze time again? Oh wait, we can't.)

Recently we had a friend over with her 15-year-old daughter. Jack (also 15) surprised us by spending a significant chunk of the afternoon cleaning his room furiously and yelling at us to do the same, saying, "This place is a shithole!" A shithole, you say? Well, if the person who thinks it's OK to leave his athletic cup on his dresser like a Hummel figurine thinks our place is a shithole, then we'd better hop to! If the boy who is so ecologically minded that he's taken it upon himself to create a mini-compost on his desk thinks we're not creating a respectful environment for guests, then we'd best grab a broom!

I absolutely don't think this next thing is just a boy thing, but I still feel compelled to talk about it. My boys are very, very good at being blunt. I recently purchased a pair of (I think) very hip sneakers, with a slight platform sole. Jack was quite candid in his opinion of them (I believe his words were, "I feel bad for you that you think those are cool, and I think your friends feel sorry for you, too.") When I have the deluded, sad self-confidence to wear them out in public, I am reminded of his opinion by the determined distance he keeps between us on the street. Thank goodness we have these children, otherwise we might find ourselves singing aloud to the radio, dancing enthusiastically at weddings, and generally enjoying ourselves in other unbecoming and cringeworthy ways.

As a food writer, I actually do want to know what the boys think of pretty much everything I make. If you are thinking, "Oh, dear," you are right. Where most kids certainly feel entitled to share feedback with the parent who is cooking, my boys feel like it's their God-given duty to be as forthcoming as humanly possible. For my own good. Sometimes they are very appreciative. But not a week goes by when I don't get a valuable little talk on how something I've made, especially involving kale, is going to cause children across the country to gag and cry. Also, that we never have any good snacks in the house, ever. You would think, Jack often remarks, that someone who is a food professional might have the mental bandwidth to remember to buy tortilla chips regularly. Yes, you would think!

Boy Moms and Boy Dads, you will go to the emergency room. It's practically guaranteed. If there is an orthopedist parent in your school, befriend him/her. Not if he/she is a jerk, of course, but if he/she is nice, this is a great friend to have. We happen to have two good friends who are a pediatric orthopedist and a pediatric plastic surgeon, respectively. Sometimes it's hard to know which to call first to evaluate the child who thought it would be great fun to stand on a rolling desk chair while his brother dispatched him at top speed down the hall. Decisions, decisions.

Here's another thing I've had to get used to: putting on one's lacrosse gear and grabbing a lacrosse stick doesn't necessarily mean you are going to play lacrosse. It could also mean that you are just going to go outside and smack the crap out of each other with a stick until someone (Charlie) starts crying. Also: coming to terms with the idea that turning to your spouse and saying, "What's the over/under on this ending badly?", and then putting money on the time at which the first wail will echo through the yard, is acceptable parenting. Not to mention that taking the time to do a little fist pump in the air if you guessed correctly, before meandering to his aid, is also admissible behavior.

It is a well-known fact that as boys hit puberty, their appetites can increase. Surge. Erupt. Recipes that say "serves 8" do not serve 8. I think it would be helpful if recipe yields addressed this, saying things like "serves 8 regular people OR 4 teenage boys." I was once testing a lo mein recipe and made a huge pot for a bunch of boys at my house. After the meal I asked how they liked it, on a scale of 1 to 10. Jack's friend Max said, "I give it a 5, because I had 5 plates." Max is not a natural at math. He is, however, very good at eating. He once ate 6 sloppy joe sandwiches at my house. AFTER dinner.

I watch some of my Girl Mom friends wrestle with how much makeup to let their daughters wear, or how early to allow them to shave their legs. But if you don't have boys, perhaps you don't know about AXE, a line of fragranced products such as deodorants and body sprays (mmmmm.....) for men that can make your nose hair release from its follicles at 50 paces. Envision a cocktail of testosterone plus Agent Orange plus a very powerful taxi air freshener. Now imagine that applied to a smelly armpit. Scent names include Anarchy, Fresh Excite, Armor, and Cool Metal. Charlie was putting on some AXE antiperspirant the other day and I made some sort of quizzical comment about whether he felt like he needed deodorant at age 12. "I just like the smell of this... It has just the right amount of 'party,' don't you think?"
Mea culpa.

I'll once again offer up the sincere apology that I have taken some large overgeneralization liberties in registering these experiences as Boy Mom experiences. I acknowledge the fact that not all Boy Moms have had these kinds of interludes, and that plenty of Girl Moms have had very similar experiences. Maybe I'm even perpetuating stereotyping, and that would be bad. But I know of very few families with girls who think a loud fart planted in the midst of a meal or a touching movie is the funniest thing since the invention of... well, AXE.

Katie Workman is the author of Dinner Solved! and The Mom 100 Cookbook. Visit her website, where this post first appeared, at themom100.com.

Baby Photobombs
More:
Raising BoysParentsvoicesmothers and sonsparents-moms
Newsletter Sign Up
Raise the kind of person you'd like to know
Subscribe to our parenting newsletter.
Successfully Subscribed!
Realness delivered to your inbox