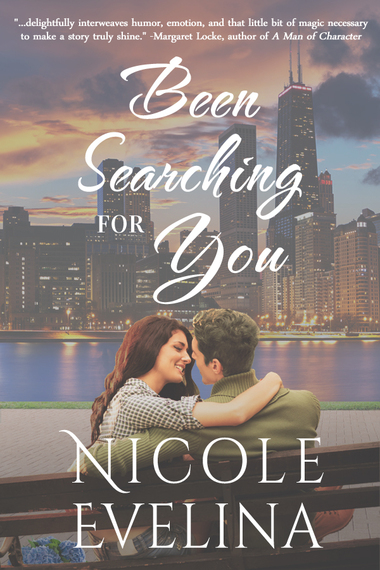 Two years ago, when I was writing Been Searching for You, my contemporary romantic comedy that is out on May 10, I never would have guessed I'd end up as a blogger for The Huffington Post. I wanted to be one, but hadn't bothered to research how to become one. So I ended up giving my main character, Annabeth, the chance to write for this publication.

While the book was edited, I decided to let my character's column speak for itself when the book came out instead of writing something subtly trying to convince you to buy it. The only background I will give is this: Annabeth is a 34-year-old hopeless romantic who is still struggling to find her soul mate. She decides that rather than waiting for him to come to her, she's going to do everything she can to try to find him, including using a fictional online dating site, which is the genesis for this column.

Without further ado, here's Annabeth's column, which is also in the book:

Waiting for Love: A 21st Century Spinster Speaks
Tell me if this sounds at all familiar. You aren't even at a family event for five minutes when the questions start. "Where's your boyfriend?" "How's it possible that a pretty girl like you is still single?" "You aren't getting any younger. When are you going to start having kids? Tick-tock."

That last one is always my favorite.

I don't know about you, but I find myself immediately on the defensive, wanting to yell, "I don't have one, and you know what? That's my choice." "Damned if I know. Ask all the single guys in Chicago what's wrong with them." And, "First, thanks for the reminder. Second, whether or not I have kids--and how--is my business, not yours."

Believe me, it's not that I don't want to get married. I do. However, I don't want to marry just anybody. Many people have theorized that my standards are too high, but you know what? At least I have them. I have so many friends who married young and are now on their second or third failed marriage, sometimes with kids or bankruptcy trailing in their wakes. That's exactly what I'm trying to avoid. If I know you aren't likely to be husband material, why would I waste my time and yours and risk growing attached to the wrong person?

However, that hasn't stopped me from putting myself out there. Earlier this year, I joined the Heart+Soul online dating service. Part of the application was an essay in which I had the chance to tell potential matches anything I wanted.

A lot of girls probably would have used this space to make themselves appear as attractive as possible by telling men what they think they want to hear. And that's probably a very successful strategy. But it's not what I chose to do. My theory was that if you want to date me, I want you to know exactly what you're in for, warts and all. So I wrote four hundred brutally honest words and let the chips fall where they may. Heart+Soul was kind enough to allow me to reproduce my essay here, complete with the picture referenced within.

"They say everyone has a secret that will rip out your heart. Here's mine--I've never been in love. I thought I was once, but looking back on it, I see it for what it was--infatuation and the need for security. I've never had that head-over-heels, heart-melting kind of love. You know, the stuff people die for. And it's what I'm looking for.

To all of you who look at my age and wonder how what I say is possibly true, I'll only say one thing--not everyone's life fits society's timeline. Some people are lucky enough to fall in love in high school or college and stay together for the rest of their lives. And that's great. I'm happy for them. But that's not the way things worked out for me. I've got a great life with a burgeoning career, a loving family, and loyal friends, but I don't have anyone to share it with. That's why I'm here. I know that person is out there, but I haven't found him. 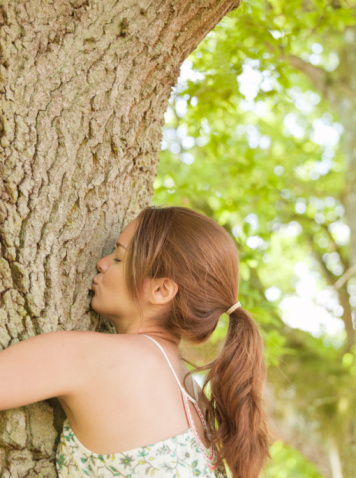 So what are you getting with me? I've been called many things: old-fashioned, naïve, and quirky. But I prefer to think of myself as unusual. If you need proof, just take a look at the photos I've chosen. You'll see one with a kissing couple in a park on the left. That's my sister and her husband. The one on the right is me. Yes, you're seeing that correctly--I am kissing a tree. It started out as a joke since I didn't have anyone to pose with at their engagement shoot, but it ended up being emblematic of who I am. I'm that goofy girl willing to make fun of her situation if only to avoid crying over it. (I'm also the girl who danced with a mop at her senior prom, but that's a different story.)

I always wanted to be the kind of woman who could perch herself anywhere and look sexy, like the models in those ads who manage to be alluring on top of the kitchen stove. In reality, I'd probably fall off.

In the end, here's everything you need to know: I am who I am. I'm outspoken and honest, fun-loving and strong. I'm a romantic who, in some ways, will never grow up. I'm not one for a quick fling. I'm in it for the long haul or not at all."

Amazingly, my candor didn't make every guy run away screaming. I've even gone on dates with a few. But one was so impressed he asked me if he could share it on his blog. With great surprise, I found it resonated with so many people. That's how this column was born.

Nearly a century separates me and the women who first redefined standards for what was acceptable for women--the flappers of the 1920s. Yet we're still facing the same sort of attitudes. In the time between, we've seen working women become the norm, the Pill revolutionize sex, and feminism give us a greater voice in all aspects of life, yet the questions we're asked are still the same. Why is that?

Single girls, I feel like it starts with us. We need to be bold, be open with our opinions. That's never going to stop a concerned mother or grandmother from asking when you're going to start popping out kids, but maybe it won't be her first, or only, question. If we don't stand up for ourselves, no one else will. I'm not advocating saying exactly what you're thinking, but you can redirect the question to a different subject. If someone asks if you're still single, you could reply, "Yes, and I don't mind. It gives me more free time to focus on [insert your interest here]. And when the right guy comes along, I can't wait to share it with him." That shuts down their arguments in a respectful fashion.

As for everyone else, if they don't want you for who you are, there are plenty more fish in the sea.

Here's hoping all of you find your ideal mate.

Like what you see? Pick up Been Searching for You at all major online book retailers.