Windfall is screening this Friday and Monday at the IFC Center. Details Below.

An addicted nation with an insecure supply of dope will turn irrational and vicious. Ask Iraq. America did not charge into that Middle East country so Iraqi children could go to school, so Iraqi women could have equal rights, so Iraqis could be free of Saddam Hussein. We charged in with guns blazing and missiles exploding and blood splattering to secure a hefty supply of energy dope. Sure there were other screwy reasons, but without our heavy addiction to foreign oil we would have never invaded Iraq.

But Iraq did not work out well; things seldom do for addicts. Craving and attacking are lousy substitutes for planning and producing. America needs to use its head. We need to wean ourselves off the increasingly scarce and expensive and polluting foreign energy and embrace the renewable and nonpolluting -- green energy! Wind power is ideal. If the wind stops, it will soon return. Wind power has become economically feasible. It's always clean. This is the way America needs to go.

Tucked away in the quiet Catskill Mountains is a little town with a big problem, a problem that is rapidly spreading across the country. The controversy has divided and polarized the residents or Meredith, New York. Life-time friendships have been destroyed. The social fabric of community has been ripped. Why? An energy company wants to erect 40 wind turbines in Meredith. 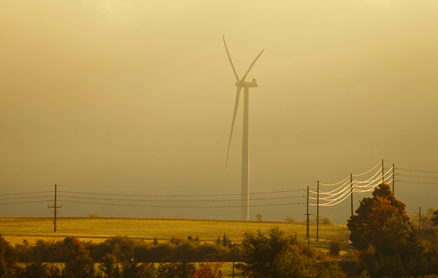 In the middle of this nasty battle is Laura Israel, a veteran film editor, who has a small mountain retreat near the village. "At first I thought I'd get a wind turbine. I chop wood to stay warm. So it would be great. Then I started listening to people."

Josh Fox -- who made Gasland, winner of the jury award for best documentary at this year's Sundance Festival -- also thought it was great when an energy company offered him money to drill for natural gas on his Pennsylvania property, until he also started listening to people.

With graceful mountains and abandoned farms, Meredith has good wind and bad poverty -- Delaware County is one of New York's poorest counties. The town's pro faction insists the wind turbines would be good for America, good for the endangered local farmers, and good for the local landowners who house the turbines. And they claim the opposition is merely a vocal minority of downstaters who are not from the Catskills. The anti group counters that the wind farms would not help the country or the local economy and local landowners pushing for the giant turbines are just greedy. The town is split and polarized and deadlocked.

These are not those cute little windmills that dot the gentle Dutch countryside. These monstrosities are perched on high ridge lines and are 400 feet tall with three seven-ton blades swirling at 150 MPH. The turbines, to maximize corporate profit they are grouped into large wind farms, emit a constant low-frequency sound, produce moving shadows and vibrate the surrounding land. Sometimes there are oil leaks, dangerous ice throwing, even engine fires. The health effects of these wind farms on humans are not known.

Laura Israel's Windfall is a fascinating, insightful, and fair documentary that takes us into both of the camps, treating both with respect, since both, as she says, "have valid points." The film also has a point of view, fine, especially with such a contentious and important issue. Mostly, however, we hear Meredith residents explaining their positions and their frustrations with the other side, only occasionally are there voices that attempt to bridge the divide -- when political temperatures reach boiling, only occasionally are there such voices.

And Windfall digs deeper to reveal those who prefer not to be revealed, the big players behind the scene. The large energy corporations focus on impoverished areas, target members of town boards and planning boards, and offer landowners money and the ideology that wind power is green energy. With deep financial pockets and a cadre of lawyers, corporate agents scour poor rural areas for appropriate wind locations and "friendly" local officials.

And there is government. Yet with a sparseness of federal and state regulations for these industrial wind farms, government is not judiciously defending the public good. The decisions and regulations are left to the small rural towns, which lack the resources for proper research. On the other hand, the government's hands-off policy does not extent to the taxpayers' money. Energy companies receive generous federal tax benefits and state incentives for their wind farms.

Laura Israel's Windfall is an intimate portrait of one New York community in heavy battle. More, her film demonstrates that the issue of green energy can be complex and divisive, and wind power -- although an environmentally sound renewable energy source -- is not appropriate for every community.

Yet we live in a gluttonous energy-guzzling country... something must be done, and soon. Windfall is an engrossing story and a timely documentary. Watch it to learn what needs to be done. Watch it to see who wins the "battle of Meredith."