This is a monumental and unprecedented environmental catastrophe. The TVA (Tennessee Valley Authority) disaster is now estimated at 5.3 million cubic yards of coal ash, or almost twice as large as the 2.8 million cubic yards generated by the World Trade Center collapse.

The most comprehensive aerial video of the spill is here:

This spill is affecting two tributaries of the Tennessee River. The Tennessee is a major river system and a drinking water source for millions of people downstream in Chattanooga, plus Alabama, west Tennessee and Kentucky. Coal ash is the waste material captured after the coal is burned for electricity - burning coal generates about half of America's electricity and according to Rolling Stone Contributing Editor Jeff Goodell, there is three times as much coal ash as municipal solid waste generated in America every year. ( "Big Coal," Jeff Goodell page 123). About 130 million tons of coal ash and power plant scrubber sludge are generated annually.

In response to an urgent request from environmental activists, I brought water testing equipment to members of United Mountain Defense working at the spill site. UMD has set up an emergency crisis management center in Kingston, TN to coordinate the citizen response to the disaster and handle the media onslaught. On Saturday Dec 27, a flotilla of citizen water testers in kayaks, including members of UMD and Waterkeeper Alliance, toured the spill site, navigating among huge chunks of coal ash, which they refer to as "ashbergs." "We named the highest peak Mt. Ash," said Matt Landon, UMD volunteer staff person.

TVA - which refers to the disaster as an "ash slide" on their website www.tva.gov - is telling the public not to worry, the water is safe, the coal ash is inert. The TVA website says "The public may call (865) 717-4006" - but no one answers that phone and it will not accept messages because the mailbox is full (Monday morning 9:27 AM EST).

The Knoxville News Sentinel (Monday, Dec 29) states "the U.S. Environmental Protection Agency reported that "very high" levels of arsenic were found in a water sample collected from the affected area and that several heavy metals have also been found in quantities "slightly above drinking water standards." (ref: http://www.knoxnews.com/news/2008/dec/29/tva-not-holding-its-head-high/ )

Officials with TVA and EPA have already lost some credibility with the local residents.

We tried to drive back to the spill site but TVA officials sent us to a media corral to sit and wait. We tried various tactics to get past TVA security, including offering to give a ride to some local residents walking home carrying heavy bags of groceries - but no luck. TVA made them walk back to their coal-ash-covered homes.

After 20 minutes of waiting, we left the media corral and drove around on back roads to try and access the spill scene. We found a great photo op at a roadside pulloff: a local Kingston resident had tacked a homemade cardboard sign reading "CLEAN COAL?" to a tree. 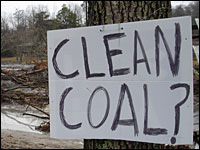 When we tried to take pictures of the sign, we were quickly accosted by an agitated TVA official wearing agreen vest, who demanded we leave immediately. We drove on to the next checkpoint, where we were detained for almost an hour. The TVA official called TVA police and demanded that we be arrested. Fortunately the local ABC News affiliate (Channel 6) was there to capture the whole scene of our detention, and we were eventually allowed to leave. TVA personnel appear to be under great strain, which is understandable -- but in my opinion they over-reacted. All we were doing was taking photos. I worked on the Martin County Kentucky coal slurry spill in 2000, when the accident-prone coal company Massey Energy dumped 300 million gallons of thick black coal slurry into two streams, Coldwater Creek and Wolf Creek in eastern Kentucky.

In that case, the local Martin County officials kept the media out by blockading the public roads for "public safety." The story was effectively squelched and most people in America never heard how bad it was. I helped to publicize that disaster, but it occurred before the age of bloggers, independent media, and videos on line. Thanks to an army of cyber-activists, America is now well aware of what has happened at the TVA plant in Kingston.

It's hard to comprehend the enormous size of this spill. TVA's coal ash mountain was stacked over 50 feet high -- as high as a 5 story building.

If a dump truck can hold 20 cubic yards of dirt and ash, it will take 265,000 truck loads to haul away all the ash (they are taking it back to the power plant). If they fill one dump truck trip every 5 minutes and work 24 hours a day, 7 days a week, it will take about 2.5 years to clean up the spill. TVA has been telling the media it will be cleaned up in about 6 weeks - this is a ludicrous claim.

There is an emergency meeting of the Kingston City Council on Sunday at 4:30, open to the public. The City of Kingston will begin the process of formulating its official reaction and response to the massive TVA fly ash spill. Everyone who wishes to speak or comment will have the opportunity to speak at the public meeting.