As these response times are averages, they don't tell of the difficulty that N.Y.C. ambulances and fire trucks face during certain times of the day. One's chances of surviving a life threatening medical event are greater when the streets are deserted, than when they are filled with cars and trucks.

Years ago, when I was freelancing for Grey Advertising, my midtown office overlooked Third Avenue, between 48th and 49th street. I would regularly hear sirens, look out my window and see emergency vehicles with flashing lights unable to move because the streets were gridlocked. Yet the lanes that the emergency vehicles were stuck in were clearly marked with the words "FIRE LANE." This image stayed with me, and got me thinking about a solution.

If you think about it, emergency vehicle response should be a priority for street use. Fire trucks and ambulances responding to emergencies have a higher priority legally and morally than people who choose to drive into Manhattan instead of taking public transit. To me, this is a given and not debatable.

The solution that I came up with years ago was to create a separate lane that would co-exist on arterial avenues. The insight, is that during the time when the lane isn't being used by emergency vehicles -- which is most of the time -- the clear and protected space it provides could be used by cyclists, providing these vulnerable users of our urban thoroughfares with protected space.

With the introduction of bike sharing to NYC last year -- which is nothing less than the introduction of a new transportation system on our city streets -- there is an opportunity to re-look at the idea as a way to provide for faster emergency response times and a safer infrastructure for city bike riders.

While I enthusiastically support bike sharing, I am not alone in thinking that the city did not do enough to prepare our streets, and failed to provide a safe riding infrastructure prior to rolling out the program.

Fortunately, no one has fatally crashed on a Citibike yet, but as the program has reached a milestone of 10 million miles ridden, there seems to be an inevitably in the air of not "if, but when," the first unnecessary death will occur.

Sometimes ideas are easier to understand if you can see them, so I have visualized my thinking to show how it can work, what it might look like, how it could be built and deployed on Manhattan's Avenues. I am showing the idea on Fifth Avenue in various resolutions with the understanding that it would work on most avenues in Manhattan, especially in Midtown, and at points near tunnels and bridges that become gridlocked multiple times a day.

The width of the lane is 12 feet, allowing enough room for fire trucks. The length of the lane is defined by concrete dividers that also act as planters, introducing a ribbon of green on Manhattan avenues.

The dividers are 7 feet long, and there is a space of 3.5 feet between them. The spacing is designed so that cyclists can easily exit the lane if an emergency vehicle enters, and also serves another function, which is to not create a barrier between the East and West side of the street for pedestrians.

The dividers are precast concrete, attached to supports that are easily affixed to the street. This fabrication process allows the lanes to be easily and rapidly installed with limited construction time. The surface of the the dedicated lane is painted a unique identifying color.

Any opportunity to decrease emergency vehicle response time should be studied, and seriously evaluated. When there is also an opportunity to create a safer infrastructure for the millions of yearly bike trips on New York's newest transportation system, then this idea takes on added importance, and should be considered with the goal of implementing a trial to evaluate efficacy and ability to co-exist with other street uses.

PHOTO GALLERY
A FIRST LOOK, AT A PLAN TO REDUCE EMERGENCY RESPONSE TIMES %u2028&amp; INCREASE SAFETY FOR CYCLISTS
Download
Calling all HuffPost superfans!
Sign up for membership to become a founding member and help shape HuffPost's next chapter
Join HuffPost

A Plan to Reduce Emergency Vehicle Response Times and Increase Safety for Cyclists (PHOTOS)
A FIRST LOOK, AT A PLAN TO REDUCE EMERGENCY RESPONSE TIMES %u2028&amp; INCREASE SAFETY FOR CYCLISTS 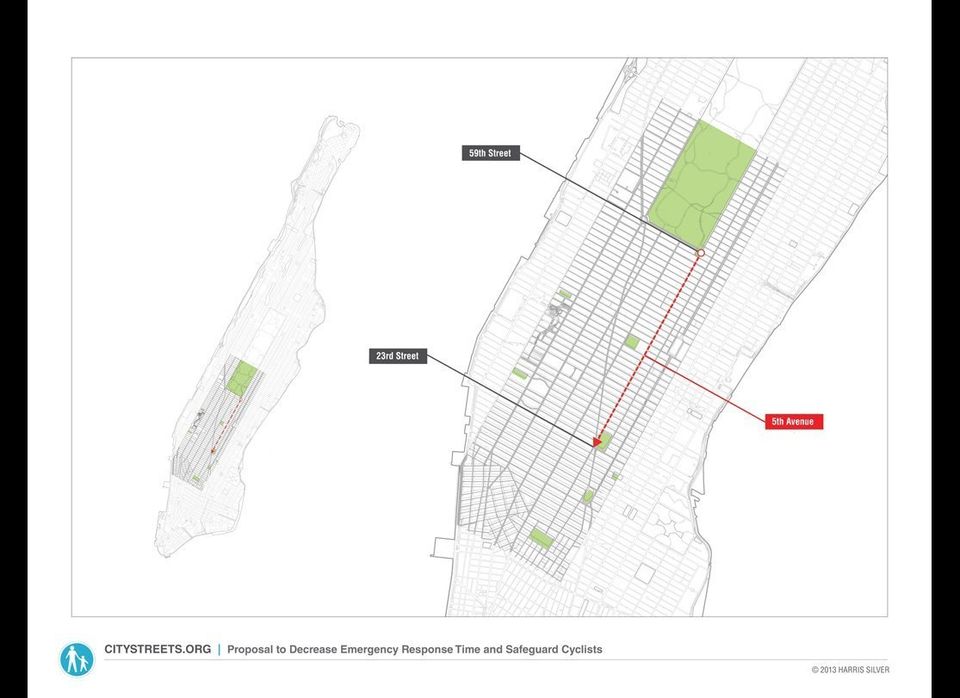