This is an updated version of Rep. Melancon's earlier post.

May 3rd, 4:30 PM Today is a similar story--the oil spill is continuing to grow. The flow of oil still has not been stopped, and until that point this is going to be an ever-growing threat to the entire Gulf coast. The President visited Venice yesterday and received briefings on the efforts to contain the spill. NOAA has also announced that they've closed an enormous part of the Gulf to commercial and recreational fishing. That step will have an immediate impact on Louisiana's economy and thousands of fishermen who make their living from the Gulf. I've been working hard for the past several days to ensure that local fishermen, their equipment, and their expertise of the waters is being incorporated into the response. They know the Gulf--they know the sensitive areas and what needs protection the most. The city of New Orleans has announced that they will begin taking steps to protect Lake Ponchartrain from being affected by the spill.

May 1st, 4:00 PM I'm in St. Bernard Parish, and just caught up with EPA Administrator Lisa Jackson and local officials to discuss the local shrimpers preparing to go
out and contain the oil spill. The shrimpers, oystermen, crabbers and fishermen here are all eager to get out on the water and help contain this spill because their livelihoods depend on it. Part of the discussion focused on the best way to get shrimpers out there to lay booms. Everyone agrees that they know the area best. The response here from people is the
same as everywhere I've been -- while folks are concerned about the impact of the spill, they're not taking this lying down and are doing whatever they can to get involved and help. 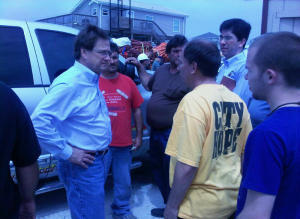 We've just learned that Coast Guard Commandant Admiral Thad Allen has taken over as the National Incident Commander and the President is finalizing plans to be in Louisiana tomorrow morning to survey the spill response. The oil slick is projected to move up the coast of Louisiana today and start impacting the Mississippi and Alabama coastline soon. Most of the oyster beds in Plaquemines and St. Bernard parishes have been closed by the state. I'm going to be out and about today seeing where I can help with the response. 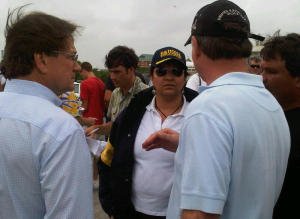 6:06 PM Currently in the car on my way back to Venice, Louisiana, for a meeting with local fishermen, Louisiana Fish and Wildlife Officials, local officials, and Dr. Jane Lubchenco, the NOAA Administrator. The local fishermen are under serious threat from this spill--especially if the oil continues leaking unchecked. We're going to get these guys what they need to help minimize the impact of the spill--we're about to see major fisheries shut down because of the oil slick, and they'll need federal help to get through this.

Started the day in Houma, LA, where I joined a flight over the oil spill with Secretaries Salazar, Napolitano, and Jackson. The rough water in the Gulf is in many places overtopping the lengths of boom set up to protect the shore, so the oil is going to be even harder to contain.

Our flight ended in Robert, LA, where the spill response command center is set up. There the group met with BP and Coast Guard officials coordinating the disaster response. EPA Secretary Lisa Jackson--who grew up in New Orleans and still has family there--will be staying in Louisiana indefinitely to help coordinate the response.

I am very concerned as to whether the response to the spill is adequate. BP is fully responsible for stopping the well from leak and cleaning up our shoreline. There are plenty of people here working to get every available resource to tackle the spill. If they need resources, we're going to get it to them. This is ultimately BP's responsibility, but we're going to do everything we can to help stop this disaster from getting even worse.

Friday, 11:31 AM: Got up early this morning to get up to speed on the latest from the oil spill disaster. Some reports are saying that the oil slick is already hitting the coast, which has everyone here very concerned.

Three cabinet-level administration officials--Secretaries Janet Napolitano, Ken Salazar, and Lisa Jackson--are in Louisiana today to meet with leaders of the response effort. I'll be traveling with them and trying to underscore the importance of mustering every available resource to minimize the effects of this disaster on Louisiana's environment and economy. People I've talked to are very worried that like Hurricane Katrina, this oil spill disaster may once again wipe out their livelihoods. 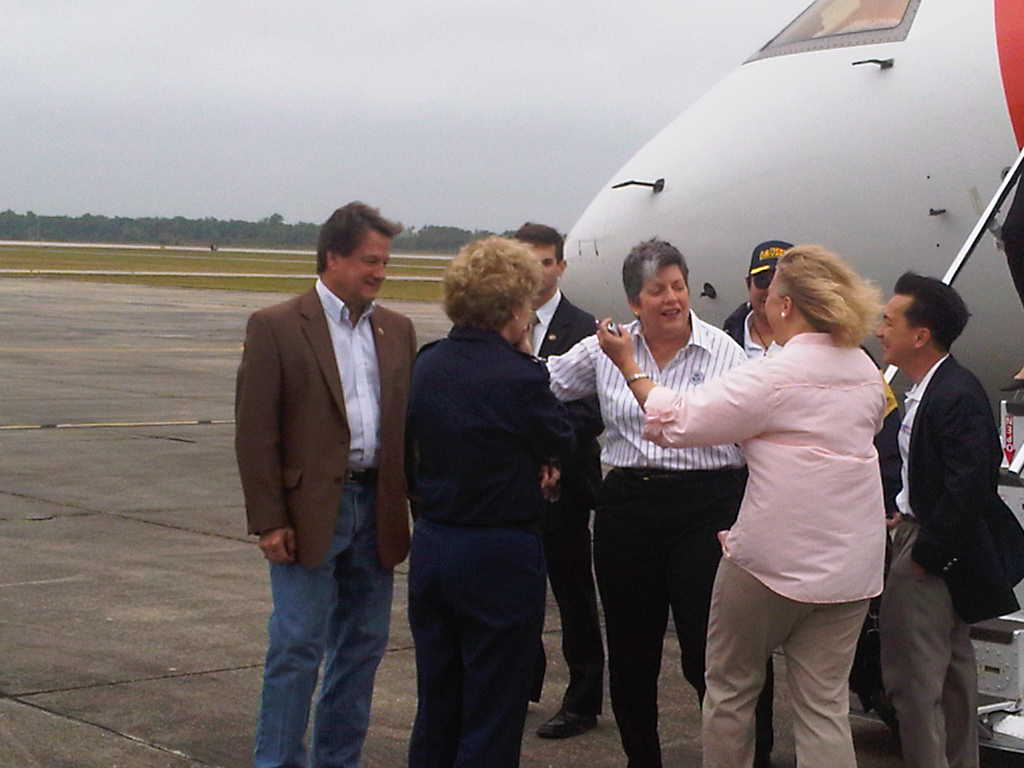 The forecast on the severity of the disaster seems to have grown more pessimistic overnight. Folks are worried that this disaster may rival the Exxon Valdez spill in its scope and impact. Much depends on the ability of BP to shut off the flow of the leaking oil from the Deepwater Horizon site. Also, the rough seas in the Gulf today are impeding the ability of crews to burn off or collect the oil. It's obvious that we need to use every available resource to cut off the flow of oil under the surface. The more it leaks, the more trouble we're going to have.

11:24 PM: I just spent the afternoon and evening in and around Venice, Louisiana, the town at the end of the Mississippi River and the staging area for many of the protection efforts going on. Venice is the epicenter for workers and volunteers going out in boats laying booms to protect the shore and marsh areas. In addition to oil workers and contractors, there were fishermen taking their own boats out into the Gulf to help. Just about everyone living around here realizes the grave threat the oil slick poses to their livelihoods and the environment. Many locals are involved in commercial fishing, shrimping, and oysters, and as the oil slick moves up the coast it will quickly threaten seafood that this industry depends on. It's good to see so many dedicated people working hard to minimize the damage from this disaster, but officials are still projecting the oil slick to have a significant impact on the marsh here.

Due to the wind strength and direction coming off of the Gulf, we're concerned that the oil slick will penetrate deep into the marsh. This is going to make prevention and cleanup much more difficult. We need to make sure all the resources of the federal government, private industry, and local volunteers are working together as smoothly as possible to help address this disaster. 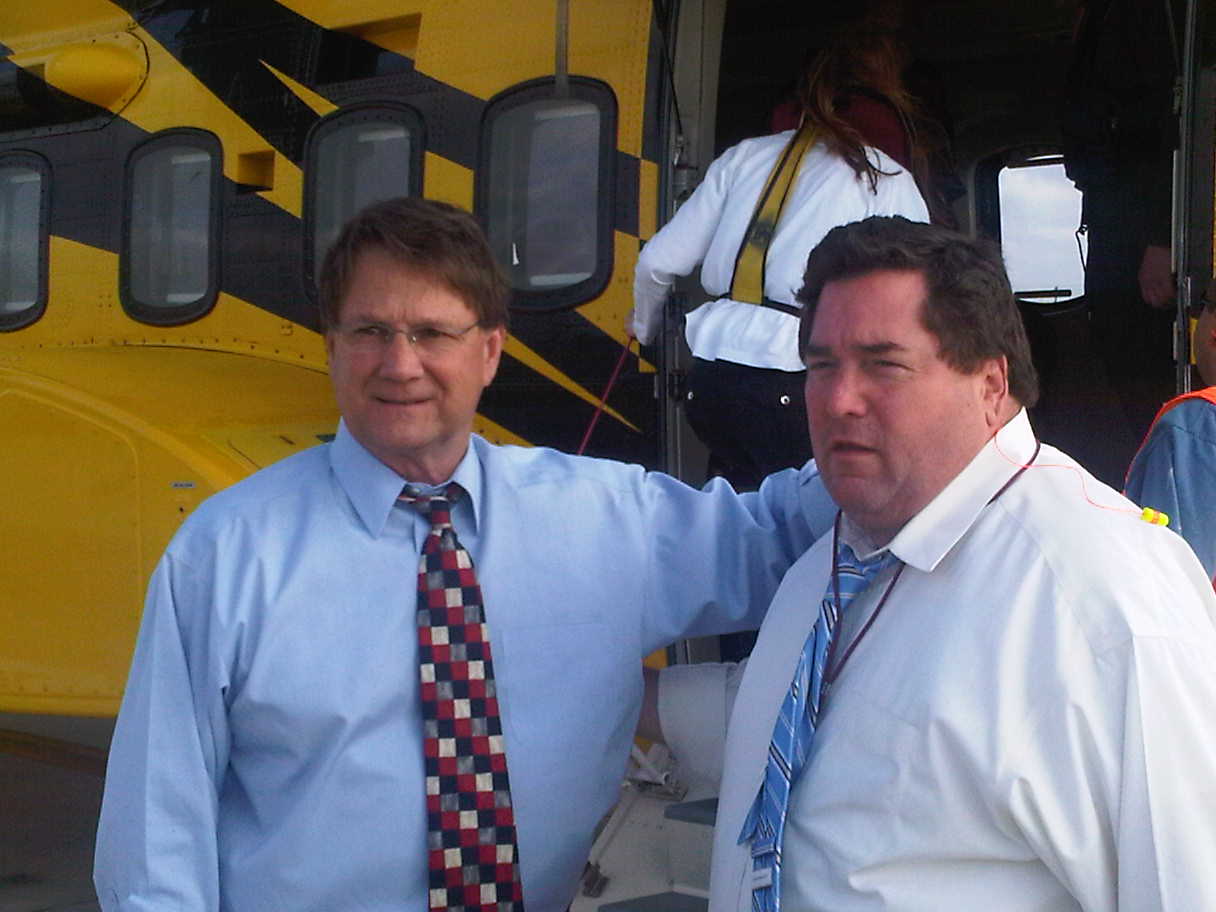 Getting onto the helicopter with Plaquemines Parish President Billy Nungesser. 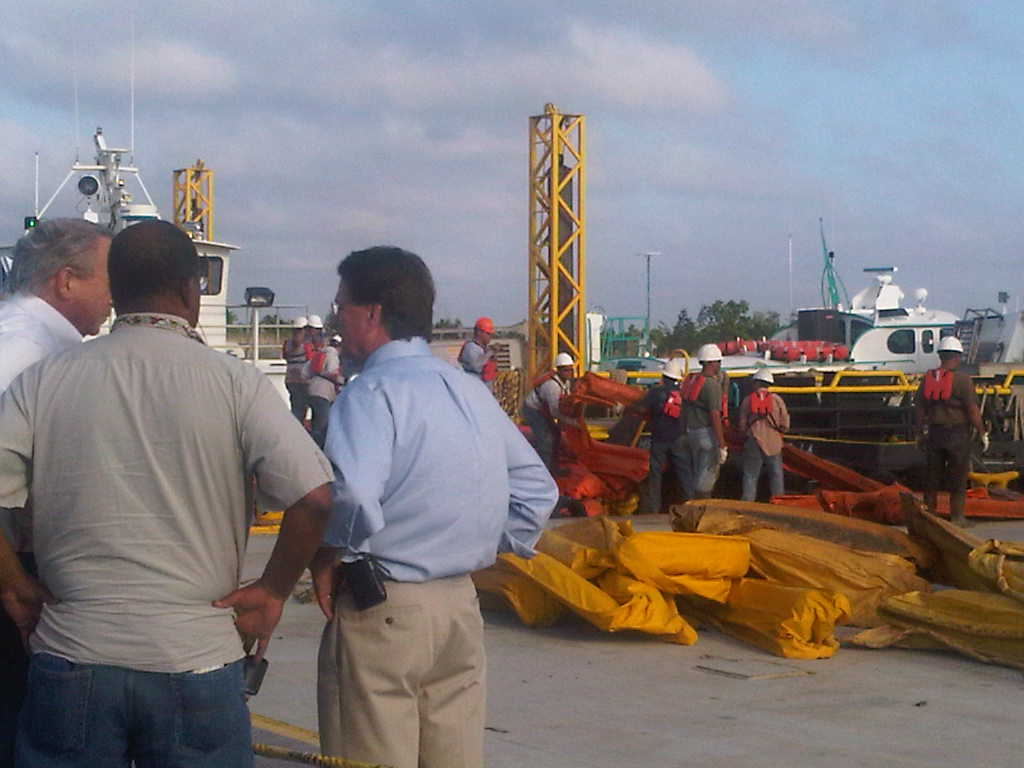 In Venice, Louisiana. You can see workers in the background loading lengths of boom onto a boat. These will be placed in the Gulf to help contain the spill.

6:40 PM: This morning I returned to Louisiana to help local officials deal with the growing oil spill from the Deepwater Horizon oil rig disaster. I represent the Third Congressional District of Louisiana, which includes much of the area most immediately threatened by the oil washing ashore. The oil spill presents a very serious threat to the fragile ecosystems that support Louisiana's oyster, shrimp, and fishing industries -- a major source of jobs and a huge part of the economy here in southeast Louisiana.

Southeast Louisiana was hard hit by Hurricane Katrina in 2005. Many communities are still recovering from the impact of that disaster, and this oil spill's impact on jobs could be a major step backward on our road to recovery. Katrina also taught us an important lesson about a swift response and minimizing the effects of a disaster. We need to marshal every possible resource to fight the oil spill -- from Coast Guard ships to volunteers to state and federal agencies.

I just stopped by the Plaquemines Parish Emergency Operations Center in Belle Chasse, LA, en route to Boothville, LA, near the end of the Mississippi delta to tour the disaster area by helicopter. BP is urging Louisiana boat owners who want to volunteer to help in the oil spill cleanup to contact Vince Mitchell at vince.mitchell@lamor.com or (425) 745-8017.

Regardless of how many barrels of oil are leaking every hour, the oil sheen seems endless on the water. We know that weather conditions are pushing oil north toward the coastal wetlands near Venice, LA -- and projections are that it may come ashore as early as this evening. You can see from the air the massive "booming" operation trying to contain the spill. The effort now is to pull these booms by boat to block oil from reaching the most sensitive areas of our coast.

Every hour that goes by that BP can't shut down that well, experts here are revising their predictions and redefining our worst case scenario.

I'll try to post updates as often as I can as I travel around the affected areas.