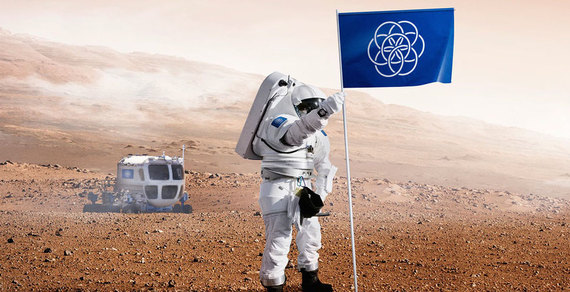 When we bring humans to Mars, what sort of flag will we plant in the dirt? The question has relevance for many reasons. First, it will likely be a multinational mission -- unlike the American-led Apollo moon missions of the 1960s. Also, inevitably there will be many more nations represented than those that actually land there, due to items such as components and food that may be supplied by other countries.

There also is another consideration: Just how representative can we be? Maybe a nation doesn't exactly participate in the mission, but it's also true that no nation is an island (at least in the metaphorical sense). All of us depend on trade and talk with other countries to do well. Perhaps we need a new flag altogether. Perhaps, as a Swedish student designer Oskar Pernefeldt suggests, we need an International Flag of Planet Earth.

The flag has a fairly simple design. It has seven circles that come together in a circle, symbolizing how we are linked to each other. Blue represents life-essential water, and the outer rings are supposed to show the edge of Earth against outer space. While no space agency has officially endorsed this idea for Mars exploration, it has caused a little stir on the Internet. More>>