How fitting for Becker College to welcome Muhammad Yunus on April 5 as the keynote speaker in the second installment of our emerging Presidential Speaker Series. He and Pulitzer Prize columnist and author, Thomas Friedman, the speaker at our inaugural event two years ago, embody our institutional aspirations and values.

These two international thought leaders also fuel our inspiration to graduate students as entrepreneurial, socially responsible global citizens who will create a better world. If we are indeed entering the Third Industrial Revolution as futurists and economists convincingly predict, the contributions of Messrs. Yunus and Friedman ring with a sense of urgency that is timelier than ever.

More than a decade ago, Thomas Friedman famously declared that The World Is Flat. In his seminal book, Friedman went on to predict that international interconnectedness would result in, and be greatly amplified by, the convergence of two forces -- expanding economic globalization and rapid technological advancement.

Three years later, he advanced this theory in the book, The World Is Hot, Flat, and Crowded. He asked readers to understand and address changing climate needs (Hot), capitalize on the potential of our global connectivity (Flat), and realize both the opportunities and challenges of our global population growth and migrations (Crowded).

Forty years prior to Friedman's influential body of work, halfway around the world in Bangladesh, an economist, frustrated with the fiscal realities of his homeland, experimented with entrepreneurial solutions for the Hot, Flat, and Crowded world. Muhammad Yunus, who studied economics as a Fulbright Scholar at Vanderbilt University, created a way to make small, uncollateralized loans available to unlikely entrepreneurs -- women in remote villages and rural communities.

Out of his experiment, the Grameen Bank was founded in 1983. Over the past 33 years, the Grameen Bank has loaned over eight billion dollars to millions of women, enjoyed a repayment rate of more than 96 percent, and quantifiably changed the poverty statistics of Bangladesh. In 2006, Muhammad Yunus was awarded a Nobel Peace Prize jointly with the bank for their efforts to create economic and social development from the bottom up.

Yunus' pioneering work has had a profound economic and social impact, transforming the lives of millions of people around the world through the creation of microfinance. This vehicle proved a larger thesis: Social business is an effective model for addressing societal problems while creating self-sustaining enterprises that also generate economic growth.

Our world continues to present profound problems and opportunities. Climate change, economic inequality and resource scarcity, all have global impact. Our growing list of concerns include: the tension between population growth and declining birth rates; and expanded human longevity and the largest scale of human migration seen in generations. And as widening gaps in education beg to be addressed, the need for new models of education such as learning agility, or the Agile Mindset, have become imperative. Life-long, adaptive learners who possess the skill sets necessary to navigate in our increasingly volatile, uncertain and complex world, ultimately will be the most capable of framing problems and finding solutions.

If economist Jeremy Rifkin is correct, we are entering our Third Industrial Revolution, signaled by the merging of superior networked communication, the available renewable energy, and sustainable transportation infrastructure into an external "neural network." This network design is open, distributive and collaborative. It allows anyone, anywhere, and at any time, the opportunity to access its use and create new apps for managing their daily lives. For example, it presently allows people to regulate the security and temperature of their homes, operate machines, and communicate with each other from around the world without human involvement.

But how do any of us, particularly people emerging from poverty, enter into such a world? This and other questions provide some insight into the profound economic opportunities as well as the ethical challenges we face.

The probability of ethical challenges is escalating at the pace of rapid technological change. This can be seen not only in the virtues of automation but also the qualms produced when it can replace human employment and productivity. It poses many moral questions. What happens when coding autonomous systems to make the best of the worst-case decisions? Or, what should companies do when they must weigh the privacy rights of individuals around personal data against solving problems with high social impact? 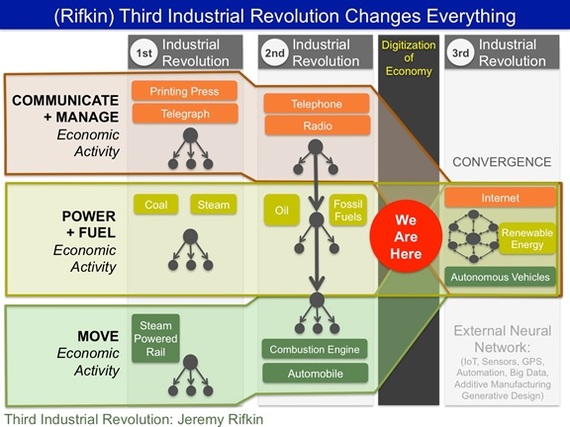 We can begin to see that in this Third Industrial Revolution the role of business in society is called into question. Is business the root cause or a contributor to some or all of these problems? Or, is business the provider of solutions? In the developed world, until now, the conventional paradigm called for business to aim for driving maximum profitability and generating capital, even if that pursuit damages or diminishes social and environmental capital. Dealing with societal or environmental problems, then, was the domain of the government, nonprofits and non-governmental organizations (NGOs) -- all of whom are funded by the excess resources, either tax or donation, generated by business. 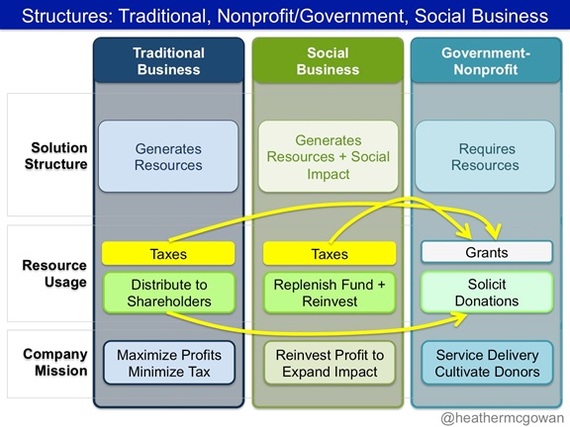 What if we expected business -- the only organizational form that creates resources or financial capital -- to focus on and prioritize profitable solution-finding? Because business generates profits, it is uniquely positioned to not only solve problems but to scale those solutions for maximum positive impact. That was precisely the notion Mr. Yunus followed in 1976, when he made his first unconventional and uncollateralized loan. Since then, the Yunus model of social business has expanded beyond microfinance. It has spawned more than 50 Yunus social businesses.

Yunus' thesis is now institutionalized at a handful of official Yunus Centres around the world, now including Becker College. In 2015, the College signed an agreement to form the first officially-sanctioned Yunus Social Business Centre in the United States. While each Centre focuses on a different slice of advancing his philosophies, all embrace Yunus' seven principles.

"In my experience, poor people are the world's greatest entrepreneurs. Every day, they must innovate in order to survive. They remain poor because they do not have the opportunities to turn their creativity into sustainable income." Muhammad Yunus

The words of economist William Gibson, who astutely pointed out in 1993, "The future is here, it is just not very evenly distributed," reverberates with even greater accuracy as we enter the Third Industrial Revolution. This Hot, Flat, and Crowded world, with all of its challenges, also offers expanded capabilities. Therefore, we believe we need a new kind of workforce. College graduates must be equipped for this rapidly changing world and prepared to leverage our rising technological capability as responsible global citizens. The next generation of global citizens must be socially conscious, curious, creative, and driven to create new, sustainable forms of value.

This is why Becker College has institutionalized a core curriculum and institutional ethos around the formation of the agile mindset mentioned earlier. The Agile Mindset @ Becker College values learning over knowing with clear core competencies -- empathy to discover new human needs; divergent thinking to find and frame problems not yet known; an entrepreneurial outlook to create new forms of value; and, last but not least, social and emotional intelligence to work effectively in trans-disciplinary teams.

Driven by Becker's core values -- notably, social responsibility and integrity -- we believe this is the best foundation from which to prepare the next generation of leaders to launch and scale solutions for our Hot, Flat, and Crowded world.